The long-awaited special report on the science underpinning the Paris Agreement goal of limiting global warming to 1.5℃ has been released today by the Intergovernmental Panel on Climate Change.

It tells us that hitting this goal will be challenging, but not impossible. And it highlights the benefits of hitting the target, by pointing out that global warming will be vastly more damaging if allowed to reach 2℃.

Based on previous calculations, Australia’s fair share of the global carbon budget is roughly equivalent to 1%. That would put Australia’s remaining carbon budget at 5.5Gt and 7.5Gt for a 66% and 50% chance, respectively.

The simplified trajectory below shows that Australia would therefore need to reach net zero greenhouse emissions by 2038 for a 66% chance of limiting global warming to 1.5℃, and by 2045 for a 50% chance. 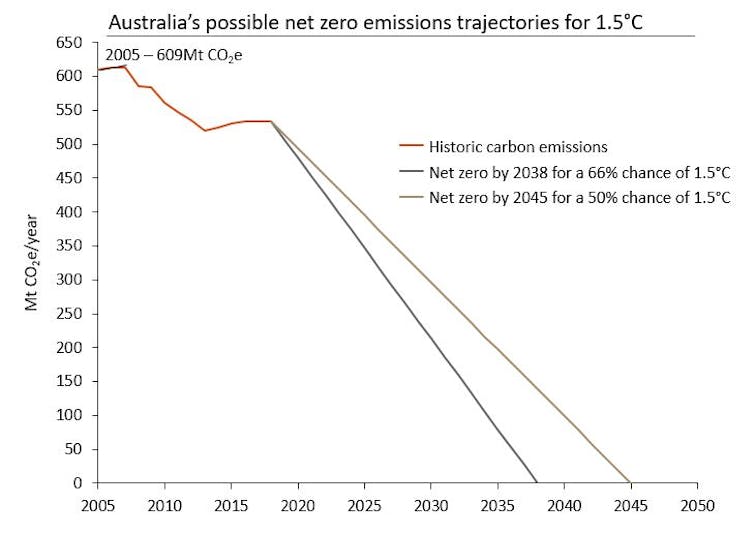 ClimateWorks Australia, Author provided In practical terms, this gives Australia two decades to deliver on our part, for a good chance of avoiding the most devastating impacts of a warming climate. Globally, we must reach net zero greenhouse emissions by 2047 for a 66% chance of limiting global warming to 1.5℃, and by 2058 for a 50% chance. Australia will have to hit net zero before it is achieved globally because we currently have among the highest per person emissions, so our decarbonisation trajectory needs to be steeper. But Australia’s emissions are rising From 2006 to 2013, Australian emissions decreased, but they have since begun to rise again. As shown in ClimateWorks Australia’s recently released report, Tracking Progress, we are not yet on track meet our current Paris commitment of cutting emissions by 26-28% relative to 2005 levels by 2030. Nor are we on track to reach net zero. Yet our research also showed we have the potential to get back on track. There have been recent periods when sectors of our economy have cut carbon at or near the pace required to achieve net zero emissions by 2050. Read more: Australia is not on track to reach 2030 Paris target (but the potential is there) Reaching net zero from here will require rapid, economy-wide action, including: increasing the share of renewable electricity improving energy efficiency electrifying transport and industry where possible switching to lower-emission fuels such as gas land use changes (reforestation, reduced land clearance, and best practice farming). There are already many examples of these kinds of approaches. For example, since 2010, solar photovoltaic prices have fallen by around 70% and battery prices by around 80%, while uptake rates have surpassed expectations. This has been the result of research, investment, government incentives, shifting consumer preferences, and economies of scale. Consumers are beginning to embrace trends such as electric vehicles and 3D printing, and we can expect more technological disruptions throughout the economy such as building optimisation, smart grids, and solar-hydrogen, which all have the potential to reduce emissions significantly. The goal is still in reach (just) The new IPCC report is adamant that the goal of limiting global warming to 1.5℃ is still achievable – despite previous fears that it is already out of reach. Yes, it is tight, but the challenge is in going faster, not the lack of solutions. Crucially, the report also points out that 2℃ of global warming would be vastly more damaging than 1.5℃, and that 2℃ cannot be treated as a “safe” limit. At 2℃, the report predicts it is “very likely that there will be at least one sea-ice-free Arctic summer per decade”. In contrast, holding warming to 1.5℃ rather than 2℃ would protect an extra 10.4 million people from rising sea levels. Some of these people are our neighbours in Pacific Island nations, many of which are implementing some of the most ambitious climate policies in the world. For low-lying countries and island states, the reality is “1.5 to stay alive”. Australia’s climate at stake Closer to home, the impacts of climate change on Australia will continue to manifest themselves in extreme weather events such as droughts, floods and bushfires. Increasing impacts are expected to extend to water, food and even border security, creating the potential for millions of climate refugees in our region before the end of the century. As a wealthy, emissions-intensive country with abundant natural resources, in a region highly vulnerable to climate impacts, Australia should take its Paris climate targets very seriously. Australia has the means to become a regional leader in climate action, positioning ourselves as a “clean energy superpower” and helping our neighbours work towards becoming carbon-neutral. Read more: Lack of climate policy threatens to trip up Australian diplomacy this summit season There are many examples within Australia of commitments already made to reach net zero emissions. States and territories representing 80% of Australia’s emissions – along with the federal opposition – have committed to reaching net zero emissions by 2050. Tasmania has already reached net zero. The ACT has legislated to do so by 2045. Other organisations have also pledged to go carbon-neutral or use 100% renewable energy, including multinational companies, major cities such as Melbourne, Sydney and Adelaide, and universities. These initiatives prove that setting targets for emissions reduction actually ignites action. The IPCC’s new report sets us perhaps the most important target of all: the world must hit net zero emissions by mid-century if we are to stand a good chance of avoiding the worst impacts of global warming.