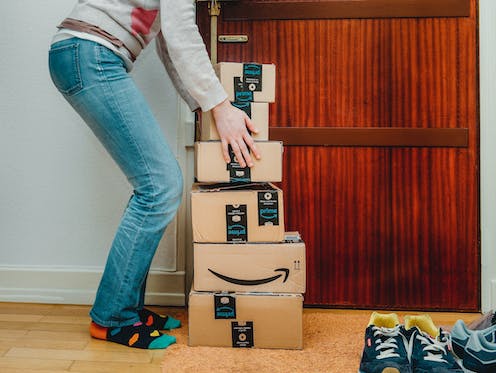 Amazon has lifted its lowest pay rate to US$15 an hour.Shutterstock

Amazon has just voluntarily raised its employees’ minimum wage to US$15 an hour. Retail giant Costco has moved to US$14. This might not sound like a lot – and it is sure not a lot to live on – but with the US federal minimum wage at US$7.25 it is a big shift.

Amazon has just voluntarily raised its employees’ minimum wage to US$15 an hour. Retail giant Costco has moved to US$14. This might not sound like a lot – and it is sure not a lot to live on – but with the US federal minimum wage at US$7.25 it is a big shift.

Why are they paying more?

The cheap answer is that Amazon in particular has buckled to external pressure.

Democrat senator Elizabeth Warren, a possible 2020 presidential contender, has suggested regulating it and other technology companies with a version of the depression-era laws used to curb the power of banks.

Senator Bernie Sanders and Representative Ro Khanna have already introduced the Stop Bad Employers by Zeroing Out Subsidies Act. Also known as the Stop BEZOS Act. Oh, the subtlety. But Amazon founder Jeff Bezos didn’t get to be the world’s richest man by pre-emptively giving into these kind of folks.

A more interesting answer is this. The US labour market is incredibly tight right now. Unemployment is running at 3.7%. Standard economic theory says that as unemployment goes down employers have to pay more to attract workers. So wages go up. People like me normally draw a nice, smooth curve in economics 101 to represent that relationship.

Trouble with the curve

But maybe the curve isn’t smooth. It could be that, especially in large companies such as Amazon, wage rises come in jumps, not smooth increments.

Imagine yourself Bezos for a day and consider what happens if you raise wages a modest amount for all your nearly 550,000 employees. That costs a ton. You could raise wages more frequently but by just a few cents an hour, which would of course cost less.

Yet we know from behavioural economics people tend to think of small raises as zero. So it costs you something but your workers don’t care. That’s a bad trade.

Read more: Is faster profit growth essential for a pick-up in wages growth?

How does this shake out? Well, it takes getting unemployment down a lot before you are willing to raise wages; and when you move, it will be a big enough move to be appreciated.

Now this is just a theory. But perhaps the explanation that sluggish wage growth can be blamed on the excessive power of big employers is incomplete.

Perhaps it is more accurate to say that power manifests itself in slow wages growth only for moderate movements in unemployment. With really big changes – like the huge decline in unemployment seen in the US – things are different.

If this is right then one unmistakable implication is that Australia also needs a big step down in unemployment to get past its sluggish wage growth. For the past five years or so wages growth has barely kept up with inflation.

Perhaps we need to get unemployment down from its current level of 5.6% to something more like 4.5% before employers will offer significant wage rises.

For the Reserve Bank of Australia, stimulating the economy to reduce the jobless rate would mean cutting, not raising, the cash rate from 1.5% now to perhaps 1% or so. With less fear about property bubbles thanks to tighter lending standards – and less fear still if Labor is elected and cuts back negative gearing perks – there is more room to cut.

I have just laid out a kind of “what if” theory. Economists test such theories with data – in this case identifying the causal effect of unemployment changes on wage bargaining outcomes – and by using some natural experiment (like an unexpected war) or clever empirical strategy (think Steve Levitt and Mark Duggan’s statistical evidence for cheating in Sumo Wrestling).

Economics research like this typically takes a couple of years. But the RBA has to set interest rates every month based on its best guess of the answer. It can’t just wait two years for the research to come in.

This is the kind of time pressure economic policy makers have had to deal with over the past decade. The world is different than it was. The old economic models of unemployment and the macroeconomy don’t work very well. Intuitions need to be rethought and instincts rewired.