A painting generated by artificial intelligence will go up for sale at auction later this month – raising again the question of whether a machine can be creative.

The auction house Christie’s says the painting is the product of a Generative Adversarial Network, in which one artificial neural network (the so-called Generator) creates an image based on its analysis of a database of 15,000 paintings by real people.

Another network (the Discriminator) then compares the new artwork to human-made paintings. If the Discriminator cannot tell the difference, the computer-generated image has passed the test.

Read more: When AI meets your shopping experience it knows what you buy – and what you ought to buy

But isn’t art the highest expression of what it means to be human? How could machines possibly emulate truly creative practices, which are often regarded as the pinnacle of human achievement?

Ultimately, the nature of creativity – and whether machines will ever be genuinely creative – is a deeply philosophical question that rests to a large degree on where we look for creativity.

If we locate creativity in the actual artwork, it is hard to deny that machines are capable of being creative.

Margaret Boden is a pioneer in the field of AI and computational creativity. In her 2016 book AI: Its nature and future she defines creativity as:

…the ability to produce ideas or artefacts that are new, surprising, and valuable.

She then distinguishes three different types of creativity: combinational, exploratory, and transformational.

Combinational creativity combines familiar ideas in new ways. A good example is the AI artist Pindar van Arman, who trained his robots to paint portraits, including self-portraits. In his view, artistic creativity:

…is little more than a complex mix of competing generative algorithms.

Exploratory creativity, argues Boden, exploits some “culturally valued way of thinking” (styles, genres, and so on) and generates new work within these parameters.

For instance, The Next Rembrandt, a campaign by the Dutch bank ING, used feature-extraction algorithms to identify all the stylistic elements that characterise Rembrandt’s work. It then used this dataset to create a new portrait in the unique style of the famous Dutch painter.

Transformational creativity does not just explore a given genre, but goes beyond it. It drops, negates or complements existing styles to such an extent that new artistic conventions might be developed in the process.

This form of creativity can be achieved by so-called evolutionary algorithms that can transform themselves and evaluate their “ideas” based upon criteria provided by the programmer.

The advertising agency M&C Saatchi used these algorithms to create an outdoor poster for a fictional coffee brand that “evolved” based on the level of “engagement” it elicited from consumers.

Equipped with facial recognition technology and connected to the internet, the algorithm determined which features of the ad – colours, typography, copy, layout – were successful and worth being replicated in further “generations”.

So it can be said that machines have successfully conquered all of the conceptual domains of creativity.

If we locate creativity not in the actual artwork but in the mind of the artist, two key objections are commonly made:

Given recent advances in the creation of deep neural networks and learning algorithms, the first objection is increasingly hard to defend.

When Google/Deep Mind’s AlphaGo beat the highest-ranked human player of the ancient Chinese board game in 2016, some of its moves had never been played before by humans and were described as “creative”.

Importantly, AlphaGo does not follow pre-programmed rules. It uses general machine learning techniques to figure out for itself how to succeed at the game. It would therefore only be fair to attribute creativity to both the human programmers and the machine.

The second objection is more difficult to dismiss. We hardly ever appreciate creative artefacts based solely on their immediate appearance and the responses they evoke.

As Ellen Winner, a professor of psychology at Boston College, argues in her upcoming book How Art Works, the notion of an unmediated experience of art is most likely a myth.

The value we ascribe to art is deeply influenced by multiple forces – an important one being what we think the artist’s intentions were when creating the work.

Just look at debate over the value of the Banksy artwork Girl With Balloon that went to auction. Some argue its value has increased after the artist deliberately part-shredded the artwork.

The artwork, now renamed Love Is in the Bin, was described by Sotheby’s Alex Branczik as:

…the first artwork in history to have been created live during an auction.

Seen from this perspective, we will accept machines as being genuinely creative only when they attain a sense of self and the capability to explain why they did what they did.

But machines don’t need to be genuinely creative to have an impact on jobs and industries. According to a large survey of machine learning experts in 2015, AI is predicted to be able to write high school essays by 2026, generate a top 40 pop song by 2027, and write a bestselling book by 2049.

These experts also expected AI to beat humans at Go in 2027 – a feat AlphaGo accomplished in 2016. Do we need to worry then? Are machines going take over both the mundane tasks and the creative jobs?

While they will definitely displace humans when it comes to routine creative activities, a study by McKinsey expects that overall jobs in the creative economy will increase.

But job profiles will most certainly change, and established value chains in the creative economy will be disrupted. For instance, machines already compose high-quality music or imagine new video games from scratch.

How exactly these advances in machine creativity will affect the creative industries – and what economic, social and ethical consequences this entails – is an issue deserving much more attention than it receives at the moment.

But none of this will matter when the portrait of Edmond De Belamy comes up for auction. What matters then is only how much appetite bidders have for AI-generated art – keeping in mind that there might be much more of it in the future. 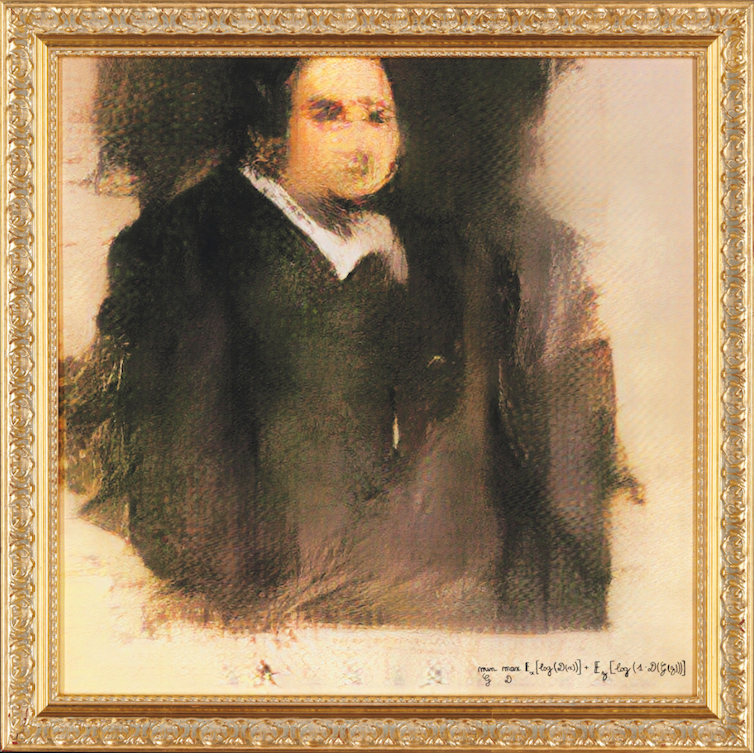