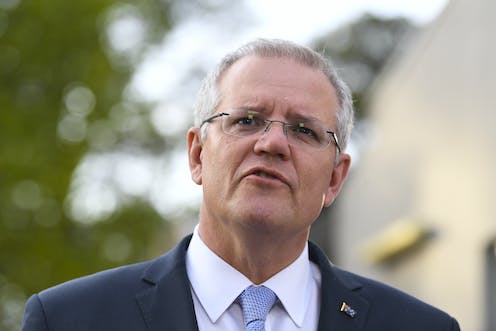 In the Gospel of Matthew 26:15, it took 30 pieces of silver for Judas Iscariot to betray Jesus. In modern Australian politics it has taken the prospect of a loss of a byelection for a political leader to opportunistically upend longstanding policy.

Prime Minister Scott Morrison’s announcement he was “open” to moving Australia’s embassy in Israel from Tel Aviv to Jerusalem as recognition of Jerusalem as Israel’s capital represents a craven response to a short-term political problem.

Whatever Morrison might say about the reasons for his strange decision to canvass a reversal of government policy, no other conclusion can be drawn than this is policymaking driven by short-term political considerations.

I can think of no other example in Australian political history where a foreign policy issue with far-reaching implications for national security has been considered because of concerns about the loss of a single seat.

I have absolutely no idea how the majority of Jewish voters – among the 13% on the roll in Wentworth – will vote. But, if I were to hazard a guess, the embassy issue is unlikely to shift many votes.

Wentworth voters, the 13% Jews and 87% non-Jews, are among the best-educated, best-informed and most discerning in the country. They will see the Morrison ploy for what it is: a cynical exercise in vote buying.

This is the sort of politicking that gives transactional politicians like Morrison a bad name. It is why the political class is held in such low esteem. Many in Wentworth, Jews and non-Jews, will be insulted by this sort of political chicanery.

In this context, what pressures might be brought to bear on Australian foreign policy in the future in a byelection, say, in a seat where ethnic Chinese predominate, or other ethnic minorities?

Will a government seek to curry favour with Beijing by yielding policy ground to China in order to secure the support of those who might feel some affinity for a foreign country?

We are putting ourselves on a slippery slope.

Let’s examine the arguments for and against shifting Australia’s embassy from Tel Aviv to Jerusalem, starting with Morrison’s own rationale for considering such a move. He said:

We’re committed to a two-state solution, but frankly it hasn’t been going that well, not a lot of progress has been made, and you don’t keep doing the same thing and expect different results.

Note he is teasing Wentworth voters by saying Australia would consider such a move without actually committing his government to doing so.

In some ways this is worse than actually carrying through on his policy impulsiveness because it invites the conclusion that in his attempts to woo Wentworth voters he is trying to have it both ways.

This is a version of a political striptease. Wentworth voters should be affronted.

In Morrison’s words, his government would consider abandoning Australian policy in place since Israel seized the Sinai Peninsula, the Gaza Strip and the West Bank of the River Jordan from the Arabs in 1967.

Israel’s victory in the Six-Day War gave it control of Arab East Jerusalem, including the Old City. Settled Australian policy has been not to recognise Israel’s control of territory seized in war under various United Nations resolutions, notably Security Council Resolutions 242 and 338.

That is why virtually all countries, including Australia, have kept their embassies in Tel Aviv. That is, until the US under Donald Trump moved its embassy to Jerusalem this year.

If Australia shifted its diplomatic mission, it would find itself in the lonely position of joining the US and Guatemala in Jerusalem. Paraguay moved its embassy back to Tel Aviv after a change of government in Asuncion.

Such a shift under Morrison’s aegis would mean Canberra had detached itself from the positions of all its friends and allies with the exception of the United States.

The question then becomes what advantage would be derived from this, given it will antagonise the Muslim world, including Australia’s close neighbours, Indonesia and Malaysia.

These are majority Muslim countries. Muslims regard Jerusalem as their third-holiest shrine after Mecca and Medina.

There is no advantage for Australia in turning Middle East policy on its head beyond domestic considerations.

As to Morrison’s claim that by joining Washington in a move to Jerusalem this would be “consistent” with pursuing a two-state solution, he does not explain how, or why, this might be the case.

Apart from anything else, Canberra is far from a significant player in the search for Middle East peace. Under almost any conceivable circumstances, its role would be insignificant.

Morrison has also ensured that, in present circumstances, Australia could not be considered an “honest broker”.

Middle East peace has stalled for various reasons, not least due to an antagonistic nationalist government in Israel and a leaderless Palestinian movement.

Morrison talks about a “two-state solution”, but it is not clear he grasps what might be involved in bringing about such a desirable outcome. Middle East peace seems more distant than at any time since 1993 when Israel and the Palestine Liberation Organisation acknowledged each other.

What is required – apart from finding leaders of goodwill on all sides – is a return to basics where compromise is struck over final status issues such as territory, refugees, security and shared sovereignty over Jerusalem.

Australia should be supporting this process instead of auctioning its foreign policy to the highest bidder – in this case, the voters of Wentworth.