Surveillance evokes fear of a “big brother” state watching our every move. The proliferation of closed-circuit television (CCTV) cameras in our cities and the emergence of big data have only deepened this fear. Marginalised groups such as people sleeping rough feel the impact most acutely, as their lack of shelter exposes them to constant surveillance.

Our recent research investigated the role of surveillance in coordinating responses to homelessness in Cairns. Homelessness occurs here at twice the national rate.

For rough sleepers, being surveilled can result in unwanted questioning by police, being moved on, or even being arrested. We found, however, that surveillance was also used to coordinate genuinely supportive responses by local social services.

Researchers have linked surveillance of the homeless to efforts by public and other agencies to ensure city centres are attractive spaces for consumers, tourists and private investors. We found surveillance in Cairns is largely directed at reducing the impact of homelessness on the city’s image. This can result in people who are homeless being excluded from safe and familiar areas where they have ready access to support.

However, other researchers point out that responses to homelessness are diverse and multifaceted. Genuine attempts to help the homeless often exist alongside exclusionary practices. Despite this, little research has been done on how surveillance practices may interface with these more supportive initiatives.

We argue that the exclusionary effects of surveillance on the homeless are not a fait accompli. It is important to challenge these negative effects and to harness the potential for surveillance to contribute to social justice.

A tool to manage ‘antisocial behaviour’

Driven by concerns about the fragility of Cairns’ tourism-dependent economy, surveillance is indeed used to manage and clear public spaces of people seen as disrupting the city’s image as safe and inviting. People who are homeless are disproportionately surveilled.

Public debate on homelessness in Cairns often centres on “antisocial behaviour” by so-called “itinerant” Indigenous people from remote communities who sleep rough in the city. Local media, politicians and business owners publicly lament the impact on local commerce and efforts to promote Cairns as a welcoming place for visitors.

Acting on these concerns, local police, council and social service personnel work together to manage the behaviour of people sleeping rough. They do this either through enforcement – move-ons, seizing alcohol, arrest, and so one – or through efforts to remove the homeless from public view, such as taking them to the police watch house or local sobering-up facility.

Surveillance plays a key role in coordinating these activities. Information on the location and behaviour of homeless people is gleaned from council-operated CCTV cameras and foot patrols and passed on to police and other agencies.

Yet homelessness in Cairns is not only seen as a problem of antisocial behaviour. Community activists and social services highlight the social and economic forces driving homelessness. These range from unaffordable housing and barriers to accessing mainstream health and welfare services, to racism and the ongoing legacy of colonisation.

Indeed, even local politicians and council staff acknowledge that responses that move people on do not resolve the issues underlying their homelessness, which call for different approaches.

Reflecting these alternative views, Cairns has some important programs that help people overcome the practical, institutional and socio-economic barriers to exiting homelessness. For instance, the Cairns Street to Home program helps rough sleepers get into permanent housing. It also provides them with health care and (re)connects them to mainstream health and welfare institutions.

Importantly, these initiatives are supported by the same surveillance practices that coordinate the more disciplinary and exclusionary responses.

CCTV camera operators provide the location of rough sleepers to outreach workers seeking to engage new clients and support existing ones. The council also uses its surveillance capacities to help service providers locate rough sleepers who have no fixed address and often no phone in urgent situations, such as when they have a limited time to accept a social housing offer or are overdue for psychiatric medications. 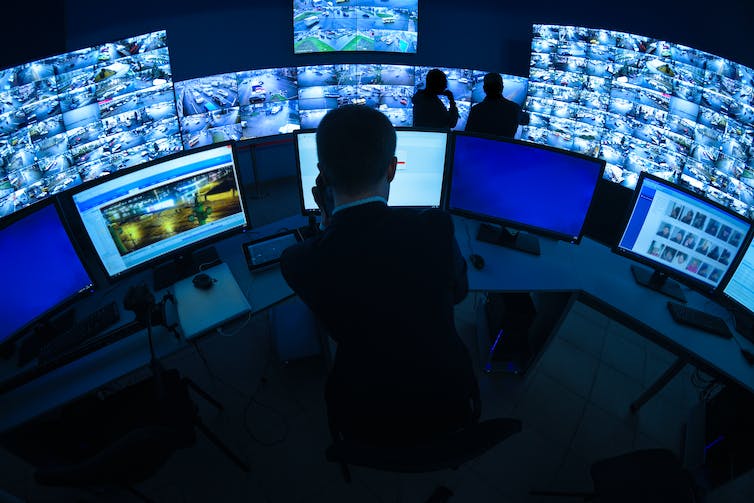 Surveillance is typically used to monitor ‘antisocial’ behaviour in public places but could just as easily be used to identify people in need of help. tsyklon/Shutterstock

Our research shows that, as well as contributing to the policing and displacement of homelessness, surveillance can help overcome barriers that people face to accessing the resources they need to end their homelessness. This suggests that while surveillance comes with inherent dangers, such as the exclusion of marginalised groups, these are not necessary or essential functions.

Australian cities have invested extensive public resources in surveillance infrastructure. Greater effort should be made to harness these public assets to achieve positive social outcomes, such as enabling people who are homeless to find housing.