More than half the world’s plant-derived energy intake comes from just three crops: rice, wheat and maize. These crops, like most land plants, live in an evolutionarily ancient partnership with a certain type of fungus, called arbuscular mycorrhizal fungi.

These fungi penetrate plants’ roots, even entering the root cells themselves. In a win-win relationship, the fungi provide the plants with crucial nutrients and the plant provides the fungi with sugar. 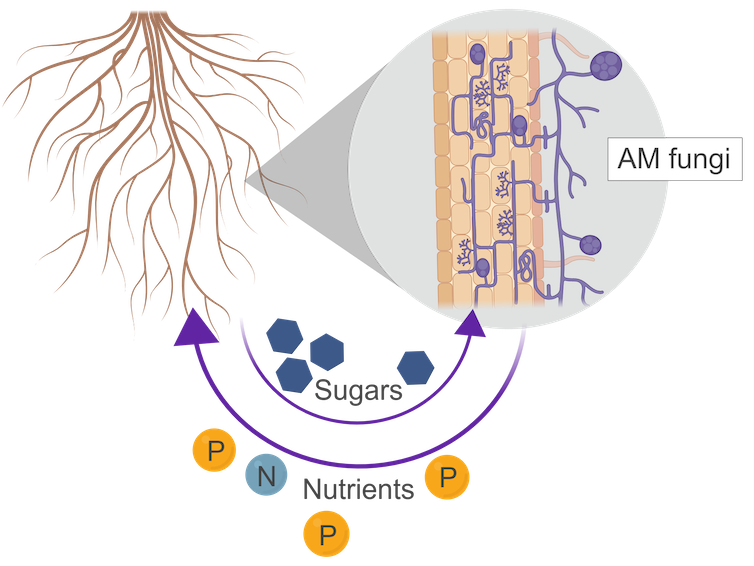 By helping plants take up nutrients from the soil, these fungi can enhance crop yields, increase pest resistance, and reduce the need for fertiliser. So it’s hardly surprising that there has been a long-held interest in harnessing these soil-dwelling fungi for agriculture.

But our research shows that in some cases these fungi can harm crops instead of helping them. This means we need to proceed with caution in pursuing the benefits of using these fungi as fertilisers.

The idea of using arbuscular mycorrhizal fungi as “biofertilisers” is not new. Many companies already sell fungal products that boost crop growth and mineral uptake.

Yet the effects of these biofertilisers on crops are actually highly variable. And despite the growing market interest, there is little proof they are necessarily beneficial in every situation.

Biofertilisers can boost plant growth and pest resistance, but this effect often depends on the context. Different species of arbuscular mycorrhizal fungi can provide different benefits, or sometimes no benefit at all.

Results can vary between crops too. One cultivar might get a significant boost from biofertiliser, whereas another one may not. Differences in soil type, nutrient availability, and even season can also affect the outcome. 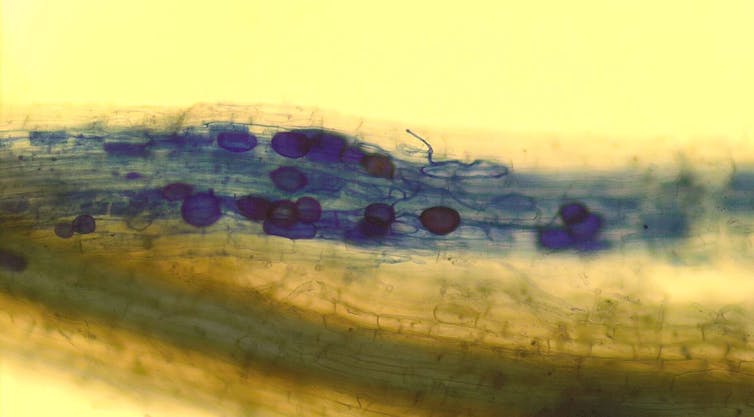 Arbuscular mycorrhizal fungi associate with plants by colonising their roots.

To work properly, fungal biofertilisers also need to be compatible with local conditions, including the microbes that are already present in the soil. A crucial question is whether the inoculant fungi are superior competitors to the “native” fungi already established? What’s more, little is known of the long-term effects of introducing these fungi to the soil and surrounding ecosystem.

Mycorrhizal fungi can also have negative effects on crops. In our research, my colleagues and I explored the effects of an arbuscular mycorrhizal fungal community on the growth of wheat and its resistance to tiny worms that attack the roots. These pests, called plant-parasitic nematodes, cause an estimated US$80 billion per year in crop damage. 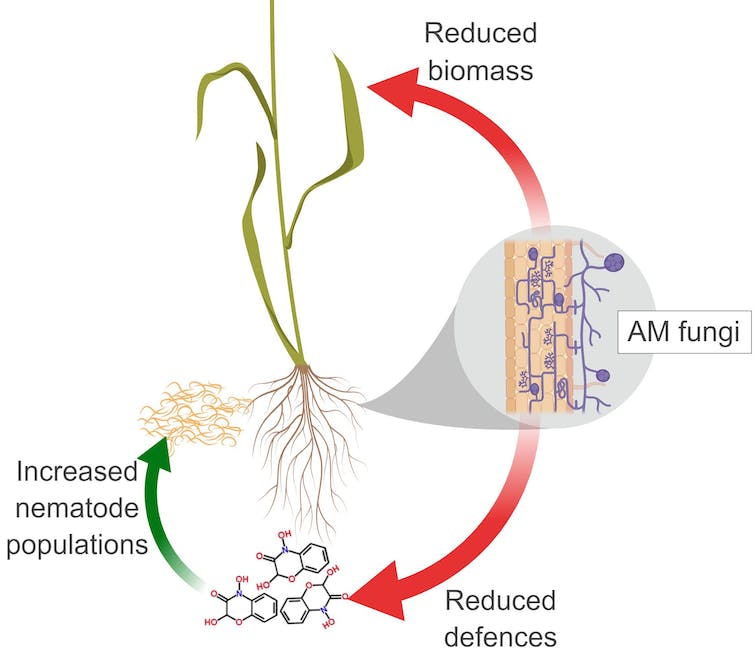 Arbuscular mycorrhizal fungi reduced crop growth and suppressed important defence-related compounds which may have caused an increase in nematode populations in the soil. Created with 'Biorender'

We found that fungal inoculation actually reduced plant growth and suppressed important defence-related compounds in the roots. We also observed an increase in nematode populations in the soil, potentially due to lowered plant defences.

Of course this is only one example. And this experiment was not done in the field. Yet it is not the only study to have identified potentially negative consequences of biofertilisers.

Read more: We need more carbon in our soil to help Australian farmers through the drought

Biofertilisers are similar to gut probiotics, in that both approaches aim to inject “good” microbes into places where they will prove beneficial. But just as the widely touted health benefits of gut probiotics don’t work for everyone, our results paint a similar picture for soil fungi.

Put simply, there isn’t a one-size-fits-all fungal biofertiliser that will boost every crop in every environment. But that doesn’t mean we shouldn’t work towards improving our ability to use these fungi. In fact, this should be a priority – biofertilisers can be a powerful tool to help tackle the challenges posed by population growth and climate change.

In the right situation, biofertilisers can dramatically increase crop yields and pest resistance, potentially helping us grow more food, more sustainably. But we need to learn more before we can turn this ancient symbiosis between plants and fungi to our advantage.