Curious Kids is a series for children, where we ask experts to answer questions from kids. All questions are welcome: find out how to enter at the bottom. You might also like the podcast Imagine This, a co-production between ABC KIDS listen and The Conversation, based on Curious Kids.

This is a very good question.

In humans and all mammals there are two exits for all the things the body does not need or cannot digest. We have a bladder (for the liquid) and an anus to get rid of solids. The fluid we call urine. It is fluid because we drink a good deal but the part that has to be expelled is called urea. It is toxic and that’s why it has to leave the body. Urea dissolves in water and it is in our urine.

The body has a clever way of separating out what is not good for us. All that work is done in the kidneys, which capture the toxins and then send these bad parts on their way out of the body.

In birds, it’s slightly different. Like reptiles, they do not have two separate exits from the body. They have one, and it is called the cloaca. It is quite similar to the human anus but expels both indigestible bits and toxins. 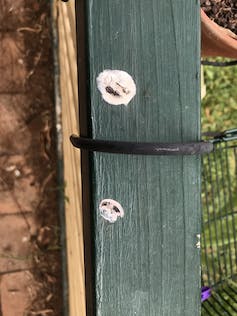 The solids (the indigestible and non-usable parts of what they eat) in birds are the black part of their poo. The toxins they expel, also filtered out in the kidneys, are white (called uric acids). Birds do not drink as much as humans so the toxins are also in solid form, not liquid as in human urine. Hence, the white solid uric acid gets expelled together with the indigestible solids (the black part).

As you can see, their bodies therefore do not need two separate channels to get the waste products expelled because both are solid. The composition of black and white differs between species. Some splatter more of the uric acid (white), some have more black (indigestible solids). It depends on their diet.

There is a third exit path for indigestibles, and quite a few bird species have this capacity. It is the ability to regurgitate “roughage” before it gets into the digestive system- in birds of prey this roughage may be feathers, bones, or hair from small animals they have eaten. 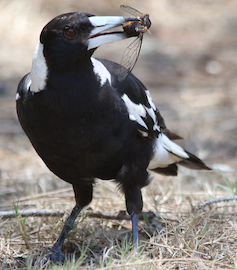 In birds, including magpies and currawongs, bits of hard wings of beetles for instance, also get expelled via the beak. Wikimedia, Pratyeka - Own work, CC BY-SA 4.0, CC BY-SA

In birds, including magpies and currawongs, bits of hard wings of beetles for instance, also get expelled via the beak. These pellets look like small olive stones. Some seeds are also too hard to digest so they can get embedded in these pellets. 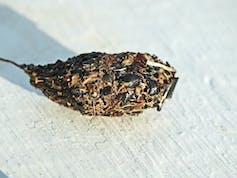 A regurgitated pellet from an Australian Magpie, consisting of beetle legs and hard-shelled outer parts of a beetle (called exoskeleton). Such pellets are usually quite small, the maximum length is about 3cm. Shutterstock

Nature has a clever trick here. Currawongs are very important for many native plants. As fruit eaters, they ingest quite a few seeds. These seeds end up in the pellets which get expelled via the beak and are therefore unharmed by the process of digestion. The seeds get their own little seeding environment in these pellets and they can then develop and grow, often a long way away from the parent tree on which the fruit originally grew. So it is a good way for the tree to spread its offspring around.

To come back to poo: As in humans, one can often judge the state of health of an individual just by looking at the poo.

In birds, when the white part turns a slightly green or yellow colour, one knows immediately that something is very wrong: perhaps the bird has had too little in fluids, perhaps it is ill.

If the black solids turn very fluid, the bird may be suffering from diarrhoea. That is often a clear sign that the bird is very, very sick and needs to go to a vet immediately.

Read more: Magpies can form friendships with people – here's how