US actress Selma Blair announced on the weekend she has been diagnosed with multiple sclerosis. “I have probably had this incurable disease for 15 years at least,” she wrote. “And I am relieved to at least know.” 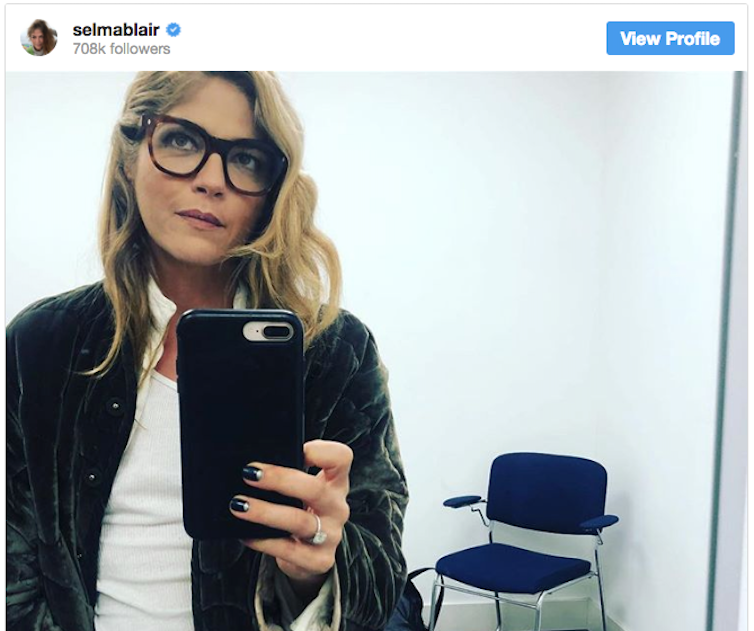 The resulting symptoms include extreme tiredness, loss of concentration and memory, numbness, sensitivity to heat and cold, difficulties walking and balancing, spasms, dizziness and low mood.

Blair, aged 46, is one of 400,000 people in the United States with MS. The prevalence is similar to that in Australia, where around 25,000 people live with the disease. The average age of onset for MS is 30, and around three-quarters of those affected are women.

There’s still a lot we don’t know about the causes, but so far the research indicates our genes and environment each have a role in driving susceptibility to MS.

Genetics plays an important role in the development of MS, with more than 200 genetic markers implicated in the disease. Collectively, the identified genes may account for up to 25% of the genetic component of MS risk, but each gene in isolation carries only a small risk.

Because of this, it’s not possible to generate a “genetic risk score” that accurately conveys the risk any given person has of developing MS. So we cannot single out the individuals who are at greater risk, even if we know how many of them might exist in the community. 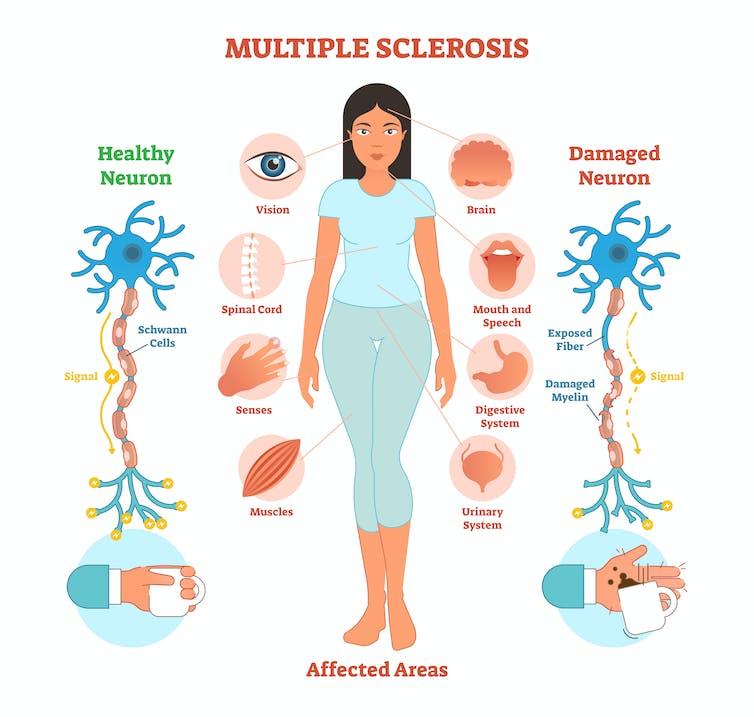 When myelin is damaged, messages can no longer be clearly transmitted from the brain and spinal cord to other parts of the body. from shutterstock.com

Researchers are now trying to adopt a more sophisticated genetic approach to help identify individuals at risk by focusing on families who have more than one relative with the disease. We know, in some instances, family members who don’t have symptoms could still harbour asymptomatic disease. This could mean the MS is either at an earlier stage, less severe or “blocked” before it has become clinically overt.

Identifying mutations common to affected family members could help understand the genes likely to be directly relevant to the cause of MS. The unanswered question is whether findings in families can be extrapolated to the general population.

There is a strong association between the Epstein-Barr virus, which often results in glandular fever in young adults, and development of MS. If you have not been exposed to the virus, you will likely not get the disease.

There are many theories for how the virus may be implicated in MS. The virus infects a type of white blood cell important for the immune system. Infection of the cell could then cause corruption of the immune response, which could lead to the autoimmunity of MS.

But the Epstein-Barr virus is not sufficient on its own to trigger MS, as more than 90% of people who aren’t affected by MS have been exposed to the virus.

Read more: Humans are to blame for the rise in dangerous viral infections

Sunlight, or more specifically exposure to ultraviolet (UV) radiation, decreases with increasing distance from the equator.

The further away from the equator you live the greater your risk of developing MS. In Australia, those living in northern Queensland are seven times less likely to develop MS than those in Tasmania.

Ultraviolet light is known to have many effects on the immune system and our synthesis of vitamin D. In particular, UV appears to have an impact on immune activity, making immune cells more tolerant and in some instances suppressing immune activity. 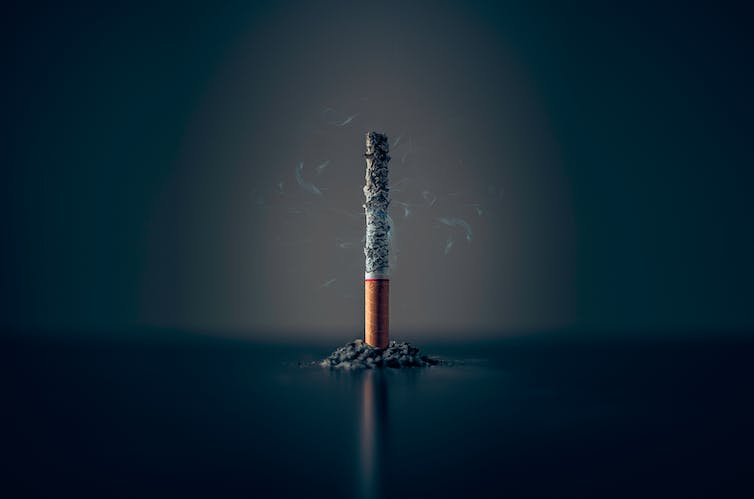 The fact women are more likely to develop MS than men may be related to hormonal changes.

We know disease activity drops during pregnancy. We also know women who have multiple children are on average less likely to get the disease and, if they do, it is likely to be less severe.

Smoking significantly increases a person’s chances of developing MS. Smokers, and people exposed to second-hand smoke, are almost twice as likely to develop MS. In particular, they are more likely to develop progressive forms of MS.

For people who already have MS, there is good evidence that stopping smoking reduces the severity of disease progression.

Although the subject of ongoing research, it would appear smoking influences the production of certain proteins in the lungs that may trigger immune cells to become more alert. At the extreme, this could set off the immune response.

There is a great deal of interest in the role nutrition and diet could play in the development and management of MS. These studies are complex due to the many potential nutritional components found in our diets.

It is possible that keeping cholesterol and fats in a healthy range could help MS symptoms, such as reducing levels of fatigue. However, this is an ongoing area of research.

There is stronger evidence when it comes to body weight and obesity and the risk of MS. Studies have shown that being overweight or obese, particularly during adolescence, is associated with an increased risk of developing MS. It is also associated with worse outcomes in people who have MS. Not much is known about the mechanisms that may be responsible for this.

The results of physical therapy for people with MS are varied but have been associated, at least in the short term, with some benefit, such as improved balance and coordination.