Spinifex grass: it’s spiky, dominates a quarter of the continent, and has no recognised grazing value. To top it all off, people have reportedly experienced anaphylactic shock from being pricked by its sharp leaf tips.

Given this less-than-stellar rap sheet, you may wonder why this plant is the subject of my research attention.

Well, it turns out that these less desirable traits are also its virtue. A plethora of birds, mammals and reptiles rely on the unique plant for their survival – to such an extent that it’s considered a keystone of its environment.

For animals small enough to navigate its sharp spines, spinifex offers a fortress of safety. Everything from mallee emu wrens, to hopping mice, to the near-mythical night parrot hide out from predators in spinifex (and snack on tasty termites and ants within).

For me, as an immigrant from the grey and drizzly lands of the UK, the bone-dry arid outback of Australia – where even the grass can harm you – was the perfect antidote to the dull, predictable safety of home.

This weird-looking plant, which always seemed to be associated with huge numbers of equally exotic animals, was so intoxicatingly new to me that I fell in love instantly. This lead to my current research: trying to stop the decline of spinifex. 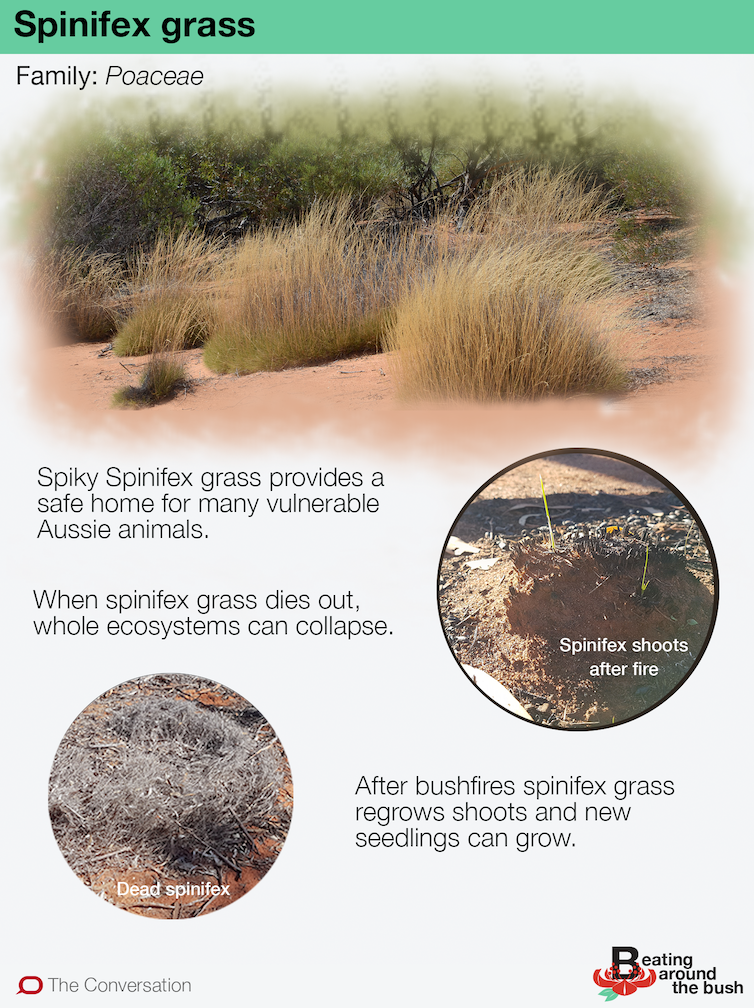 The Conversation, CC BY To back up a little, the common name “spinifex” is a bit misleading. There’s a genus called Spinifex (mostly made up of coastal grasses), but spinifex grass doesn’t belong to it. Spinifex grass is actually part of the genus Triodia. There are two main kinds of spinifex: an older, harder form suited to arid environments which generally grows in the south of Australia; and a “soft” form, which tends to perform better in more tropical, northerly regions. Regardless of species, spinifex is well adapted to thrive in some of the harshest environments in Australia, growing in well-drained, infertile, sandy soils. It can cope with extremes of long-term drought and responds well to fire. 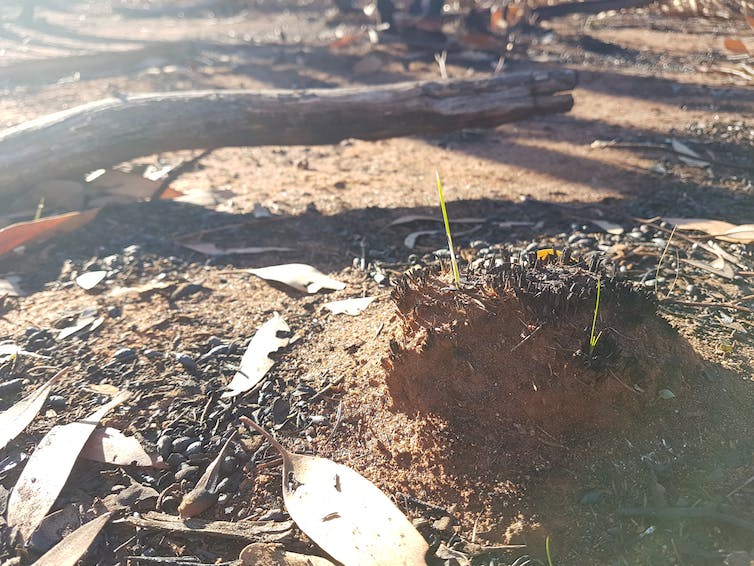 Spinifex emerging after a fire. Author provided You might think, given the near-ubiquity of spinifex across the arid wildernesses of Australia, and its ability to withstand poor soils, infrequent rain, extreme temperatures and fire, that this hardy plant is free from the almost inevitable stories of doom and gloom associated with many native species. However, all is not well for some spinifex communities. Spinifex in mallee woodland, such as can be found in south-central New South Wales, has suffered from heavy clearing (mostly for agriculture), with only about 3% remaining from pre-European settlement levels. Counterintuitively, firefighting efforts in these areas may have also hurt spinifex. Bushfires clear the land and help new spinifex plants grow; in their absence, old and decaying plants dominate. This means the habitat degrades, which could spell disaster for the many animals that rely on abundant, healthy spinifex. Read more: Aboriginal fire management – part of the solution to destructive bushfires Spinifex is such an important species that its disappearance could even precipitate an extinction cascade. Indeed, studies suggest that some reptiles rely on spinifex habitat to survive in remnant bush in farming landscapes. Despite these issues, there is plenty to be hopeful about. Spinifex has recently attracted more attention from industry as an abundant and under-used resource, building on what many Indigenous people have known for centuries. Spinifex has traditionally been used by some Indigenous people to craft waterproof thatching for shelters, or as a source of adhesive resin.

Spinifex covers vast swathes of Australia. Thomas Jundt/Flickr, CC BY-NC Recent technological advances may make the plant’s nanocellulose easier to extract. That means spinifex could be a component of everything from cardboard to carbon fibre, fire hose liner, cattle tags, and even condoms. Researchers in the field – like me – are also starting to gain a better understanding of the factors that affect spinifex. We’re creating maps of grass distribution, and reintroducing fire to areas with significant amounts of spinifex. Read more: Leek orchids are beautiful, endangered and we have no idea how to grow them Returning from time in the field with hands covered in more spinifex splinters than I can count has done nothing to dampen my ardour for this overlooked group of grasses. After all, what’s not to love about a unique plant found nowhere else in the world, that provides a refuge for some of Australia’s most iconic animals, and may also lead to safer sex in the future? No matter how many times it pricks me, I’m still coming back for more.