Fast radio bursts (FRBs) are just that – enormous blasts of radio waves from space that only last for a fraction of a second. This makes pinpointing their source a huge challenge.

In follow-up research, published today in The Astrophysical Journal Letters, we have taken one of these new detections – known as FRB 171020 (the day the radio waves arrived at Earth: October 20, 2017) – and narrowed down the location to a galaxy close to our own.

Read more: More 'bright' fast radio bursts revealed, but where do they all come from?

This is the closest FRB detected (so far) but we still don’t know what causes these mysterious radio bursts that can contain more energy than our Sun produces in decades.

As radio waves travel through the universe they pass through other galaxies and our own Milky Way before arriving at our telescopes.

The longer radio wavelengths are slowed down more than the shorter wavelengths, meaning that there is a slight delay in the arrival time of longer wavelengths.

This difference in arrival times is called the dispersion measure and indicates the amount of matter the radio emission has travelled through.

An FRB’s journey to Earth.

FRB 171020 has the lowest dispersion measure of any FRB detected to date, meaning that it hasn’t travelled from half way across the universe like most of the other FRBs detected so far. That means it originated from relatively nearby (by astronomical standards).

By using models of the distribution of matter in the universe we can put a hard limit on how far the radio signal has travelled. For this particular FRB, we estimate that it could not have originated from further than a billion light years away, and likely occurred much closer. (Our Milky Way galaxy is about 100,000 light years across.)

This distance limit, combined with the sky area we know the FRB came from (an area half a square degree - or roughly two full Moons across) enormously narrows down the search volume to look for the host galaxy.

A region of the sky this size typically contains hundreds of galaxies. We used giant optical telescopes in Chile – including the appropriately named Very Large Telescope and Gemini South – to derive distances to these galaxies by either measuring their redshifts directly, or by using their optical colours to estimate their distance.

This allowed us to drastically reduce the number of possible galaxies within the distance limit to just 16.

By far the closest, and we believe most likely to host the FRB, is a nearby spiral galaxy called ESO 601-G036. This is 120 million light years away – making this FRB host almost our next door neighbour. 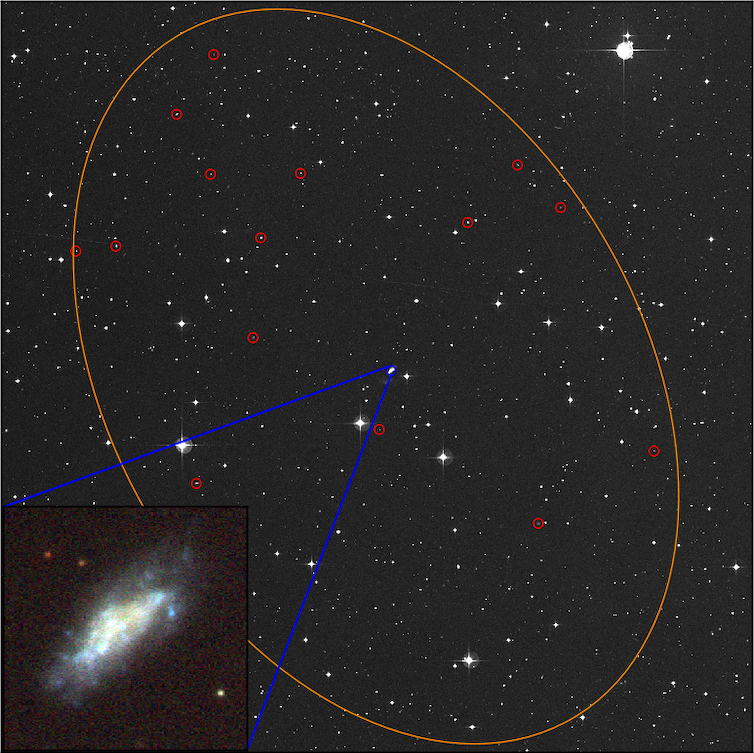 Optical image of the search area from the Digitized Sky Survey (DSS). The circles mark possible host galaxies for FRB 171020, but these are all much further away than the most likely galaxy ESO 601-G036, shown in the lower left as a three-colour image from the VLT Survey Telescope (VST) ATLAS survey. ESO, Digitized Sky Survey and VST-ATLAS, Author provided

What is particularly striking about this galaxy is that it shares many similar features to the only galaxy known to produce FRBs: FRB 121102.

This FRB is also known as the repeating FRB due to its – so far unique – property of producing multiple bursts. This helped astronomers locate it to a small galaxy about more than 3 billion light years away.

ESO 601-G036 is similar in size, and forming new stars at about the same rate, as the host galaxy of the repeating FRB.

But there is one intriguing feature of the repeating FRB that we don’t see in ESO 601-G036.

Using CSIRO’s Australia Telescope Compact Array (ATCA) in Narrabri, NSW, we have searched for this persistent radio emission in ESO 601-G036. If it was anything like the repeater’s galaxy, it should have a boomingly bright radio source in it. We saw nothing. 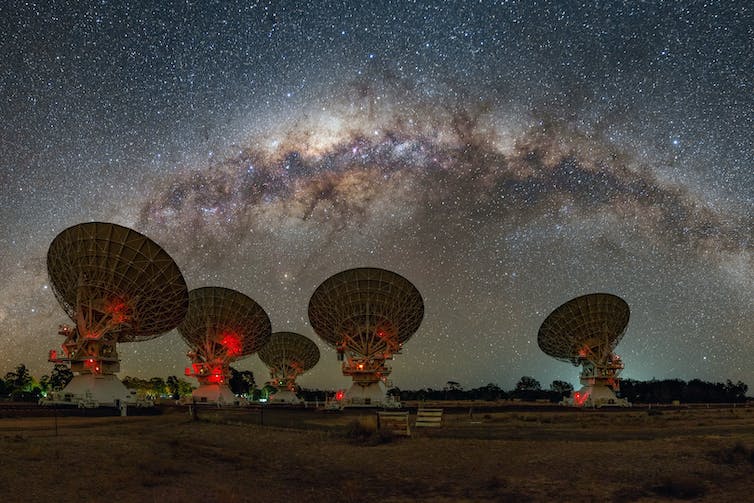 Not only did we find that ESO 601-G036 doesn’t have any persistent radio emission, but there are no other galaxies in our search volume that show similar properties to that seen in the repeating FRB.

This points to the possibility that there are different types of fast radio bursts that may even have different origins.

Finding the galaxies that FRBs originate from is a big step towards solving the mystery of what produces these extreme bursts. Most FRBs travel much further distances so finding one so close to Earth allows us to study the environments of FRBs in unprecedented detail.

The hunt for more

Unfortunately, we can’t say with absolute certainty that ESO 601-G036 is the galaxy that FRB 171020 came from.

Read more: A Goblin could guide us to a mystery planet thought to exist in the Solar system

The next big hurdle in understanding what causes FRBs is to pinpoint more of them. If we can do that we’ll be able to work out not only exactly which galaxy an FRB occurred in, but even where within the galaxy it occurred.

If FRBs occur within the central nuclei of galaxies, this could perhaps point to black holes as their source. Or do they prefer the outskirts of galaxies? Or regions where a lot of new stars have recently formed? There are still so many unknowns about FRBs.

Several radio telescopes around the world are commissioning systems to pinpoint bursts. Our study has shown that by combining observations from radio and optical telescopes we’ll be able to paint a complete picture of FRB host galaxies, and be able to finally determine what causes these FRBs.