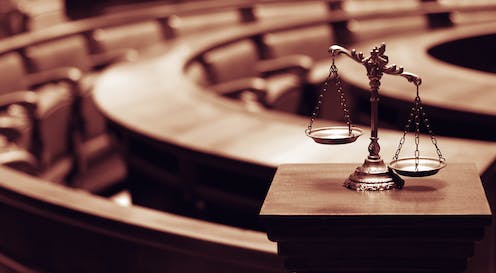 In a trial involving a jury, the judge gives the jury instructions on various issues including the relevant laws, trial process and evidence. In Victoria, these instructions are know as jury directions.

Jury directions are necessary to ensure a fair trial. Juries need to understand the directions to reduce the likelihood of a miscarriage of justice, which may result in an innocent person going to prison, or even dying in systems where there is a death penalty. Equally, it could lead to a guilty person being released to commit more offences. Miscarriage of justice is by definition unjust, damaging for the participants, and reflects poorly on the justice system.

However, jury directions can be complex and difficult to understand, and can therefore may not fulfil their main purpose of instructing the jury. To avoid miscarriages of justice, we need a jury direction process that leads to maximum juror understanding.

Read more: Eight cases from across history which still shape the law today

What are the issues with jury directions?

The main purpose of jury directions is to communicate with the jury about the issues mentioned above. But judges have a second hidden audience – appeal court judges – and a secondary motive, which is to avoid retrials on the grounds that the directions were not given correctly.

In order to ensure their jury directions are legally watertight and avoid successful appeals, judges will use language and procedures that a court or jurisdiction has previously approved. This has led to judges using legalistic processes and wordy, complex language that may be poorly understood by jurors. In practice, this second motive has come to dominate the process and undermine the primary purpose of communicating with the jury.

Some factors on the jury’s part may also impede communication. Jurors may have limited understanding of the legal system and legal language. They may be overwhelmed by the complexity of jury directions, making it difficult to process and retain the information. Limits on jurors’ attention spans can also be an issue, as jury directions often take several hours, during which jurors can be affected by stress, fatigue and boredom. Judges have said that jurors’ attention is often lost during this.

The archaic dress, strange procedures, extreme formality, and hierarchy of the courtroom can confuse and intimidate jurors.

Then there is the method of communication between judge and jurors, which is overwhelmingly spoken and one-way: from the judge to the jury. The process for the jury to communicate to the judge can be onerous. In Victoria, the jury communicates with the judge by writing down their message and pass it to the tipstaff, the judge’s assistant, who then passes it to the judge. This places a barrier on verbal interaction and decreases communication.

What can be done to improve jury directions?

To judge whether jury directions have been successfully communicated, we need to ask whether the demands made by the procedures and language of the jury directions matched the capacity of the target audience.

Advocates for clearer legal language, known as the plain legal language movement, believe that communication is enhanced if it is brief, orderly and clear (particularly not unnecessarily complex).

For example, take a relatively standard jury direction, given at the start of a trial, which is instructing them to make their decision solely on the evidence presented in the trial. The direction is 202 words long, plus an additional example, and most of the sentences are long and complex. Furthermore, it is disorganised and redundant.

Here is a suggested revision, made with the lawyerly help of Matthew Weatherson of the Judicial College of Victoria:

There are two kinds of evidence.

First - what the witnesses say or agree to. It is not what the lawyers suggest.

Second - exhibits. These are things that we will show you. I will tell you when there is an exhibit, and we will give it a reference letter or number.

It is around one quarter the length of the original. The complexity of the language has been considerably reduced. The information has been logically re-organised. It is more orderly, briefer and clearer, and therefore more likely to be understood.

Read more: If small print ‘terms and conditions’ require a PhD to read, should they be legally binding?

Some other possible procedural changes are:

Currently, jury directions inadequately instruct jurors because the need to address a secondary audience, the appeal court, has overridden the needs of the primary audience, juries.