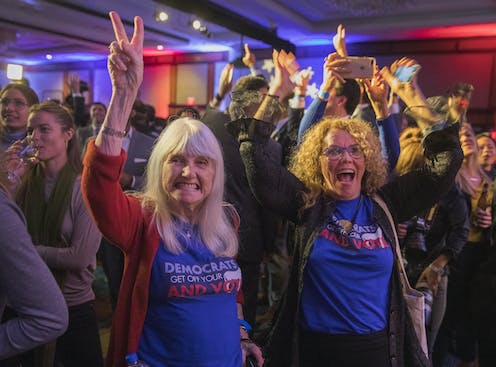 US midterm elections were held today. All 435 House seats and 35 of the 100 Senators were up for election. Democrats were defending 26 Senators, including some states that Trump won by big margins in 2016, and Republicans just nine.

US midterm elections were held today. All 435 House seats and 35 of the 100 Senators were up for election. Democrats were defending 26 Senators, including some states that Trump won by big margins in 2016, and Republicans just nine.

Democrats won the House, regaining control of a chamber they lost at the 2010 midterms. They currently have a 218-192 seat lead over the Republicans, with 25 races uncalled, and have gained a net 26 seats. Democrats lead the House popular vote by 50.7-47.6, but this gap will widen as more Californian votes are counted over the coming weeks.

The New York Times House forecast currently gives Democrats a predicted final majority of 229-206 and a popular vote margin over the Republicans of 7.1%. Expectations were that Democrats needed to win the House popular vote by six to seven points to win control, owing to Republican gerrymandering and the concentration of Democratic votes in urban areas.

In the Senate, Republicans hold a 51-45 lead over Democrats, with four races uncalled. They gained Missouri, Indiana and North Dakota. Indiana and Missouri voted for Trump by 18-19 points in 2016, and North Dakota by 37 points. However, Republicans missed out in West Virginia, which voted for Trump by 42 points. West Virginia’s Senator, Joe Manchin, is a more conservative Democrat. The Democrats gained Nevada, somewhat compensating for losses.

The most disappointing Senate result for Democrats is likely to be Florida, which voted for Trump by just 1.2 points. But Republican Rick Scott, the current Florida governor, currently leads incumbent Democrat Bill Nelson by 50.2-49.8, with few votes outstanding. Strong rural turnout for the Republicans, and lack of turnout from Democratic-favouring Hispanics, was probably responsible for this result.

A Senate byelection in Mississippi used a “jungle primary” format, where all candidates, regardless of party, run on the same ballot paper. If nobody wins a majority, the top two proceed to a runoff. The Republicans will almost certainly win this seat after the runoff on November 25.

In the Senate, Democrats paid the price for a very strong performance when these seats were last up for election in 2012. Republicans will be defending 22 seats in 2020, and Democrats just 12. As the whole House is up for election, it is a better gauge of popular opinion than the Senate.

I wrote for The Poll Bludger on Saturday that the vitriolic anti-immigrant rhetoric, with which Trump closed the campaign, was likely to be counterproductive in the House, where battleground districts had higher levels of educational attainment. However, the more rural battleground Senate states were easier to win. In my opinion, it would have been better for Trump to focus on the strong US economy in the final stretch.

These results will give Democrats a veto over any legislation proposed by Trump and the Republicans, and they will be able to set up House investigations into Trump. However, the Senate has the sole power to confirm presidential Cabinet-level and judicial appointments. The Supreme Court currently has a 5-4 conservative majority, so Democrats will hope that none of the left-wing judges dies in the next two years.

With four contests uncalled, Republicans led Democrats by 25-21 in state governors, a six seat gain for the Democrats. Governors and state legislatures are important as, in many states, politicians can draw federal boundaries.

The Victorian election will be held on November 24. A Newspoll conducted October 24-28 from a sample of 1,092 gave Labor a 54-46 lead, a three-point gain for Labor since April. Primary votes were 41% Labor (up three), 39% Coalition (down two) and 11% Greens (steady). One Nation will not contest the state election.

45% (up two) were satisfied with Premier Daniel Andrews, and 40% (down seven) were dissatisfied, for a net approval of +5, up nine points. Opposition Leader Matthew Guy’s net approval was -15, down two points. Andrews led Guy by 45-29 as better Premier (41-34 in April).

Labor led the Liberals by 45-37 on managing Victoria’s economy, a bad result for the Liberals as economic management tends to favour conservatives. Labor also led by 43-32 on maintaining energy supply and keeping power prices lower (42-40 in April). On law and order, a Liberal lead of 46-37 shrunk to just 39-38. Labor led by 33-30 on having the best plan for population growth.

We have had a recent Galaxy poll for the bus association that gave Labor a 53-47 lead. This Newspoll adds to the impression that Labor is pulling away, and should win the election easily.