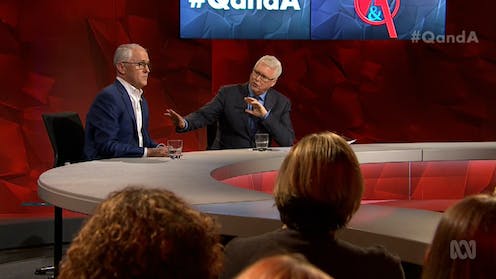 Malcolm Turnbull has delivered a hefty blow to the struggling Morrison government by refocusing attention on the one question it has desperately tried to smother.

That is: why was he sacked?

When he appeared on Thursday’s Q&A special, Turnbull was on a dual mission. His neat blue jacket told the story. There would be no reversion to the pre-prime ministerial free-wheeler dressed in leather.

He was there to hold his executioners to account, to ensure they have no escape, from him or from the public. And he was primed to defend his record, to write the history of his three years in office as a story of accomplishment and success. He wants to be defined by what he did, rather than by how badly things ended.

Essentially he presented himself simultaneously as the victim and the victor.

The opening question was predictable but central: “Why aren’t you still prime minister?”

Turnbull’s reply was rehearsed and targeted personally as well as generally.

This was “the question I can’t answer,” he said. “The only people that can answer that are the people that engineered the coup - people like Peter Dutton and Tony Abbott and Greg Hunt and Mathias Cormann - the people who voted for the spill.

He rammed home the message. People had to be “adults and be accountable”. Members of parliament “have to stand up and be prepared to say why they do things”.

So those who chose “to blow up the government, to bring my prime ministership to an end … they need to really explain why they did it. And none of them have.”

Read more: Grattan on Friday: Now Malcolm Turnbull is the sniper at the window

So much for Scott Morrison arguing the public have gone beyond the “Muppet show”, or defence industry minister Steve Ciobo claiming Australians didn’t care about what had happened.

Labor has kept pressing on the “why” question, even when commentators doubted the tactic, and now Turnbull has given the opposition a load of fresh ammunition.

This makes it harder for ministers to shrug off Labor’s harking back to the coup. To do so drags them into criticism of Turnbull, which is counterproductive.

Once again Bill Shorten is the beneficiary of his opponents’ self-destruction.

Turnbull saw a “fair prospect” of the issue resonating in next year’s election campaign because “Australians are entitled to know the answer”.

In wishing Morrison “all the best in the election”, Turnbull emphasised that he personally was out of parliament and he’d had little to say since he’d left - he’d wanted to give his successor “clear air”.

But there’s an ambivalence in Turnbull’s behaviour towards Morrison. When his own leadership was doomed he helped Morrison beat Dutton. But his intervention is now hurting his successor.

Of course Turnbull’s assertion he’s “out of politics” is disingenuous, or at least premature. What could be more political than Thursday night’s performance?

Apart from injecting new vigor into the issue of his sacking, his critique of the Liberal party’s move to the right was powerful and damaging, encapsulated in his observation about Liberal-minded voters installing like-minded crossbenchers.

He pointed to Mayo, Indi and Wentworth, seats previously solid Liberal. “They are now occupied by three Independents who are all women, who are all small-l liberals, and all of whom, in one way or another, have been involved in the Liberal Party in the past,” he said.

By electing these independents the voters were saying “we are concerned that the Liberal Party is not speaking for small-l liberal values”, he said.

This brings to mind the speculation about a possible high-profile independent emerging in Warringah who could give Tony Abbott a run for his money.

There was much else in the Turnbull hour that was challenging for the government, including his belief the Liberals would have held Wentworth but for the campaign’s “messy” final week, and his criticism of the “blokey” culture of parliament.

Turnbull talked up an extensive legacy for himself, highlighting the achievement of same-sex marriage (though some would give the praise to certain pesky backbenchers). Typically, he wouldn’t cede ground over standing back from the battle in his old seat.

As always with Turnbull, Thursday’s appearance will polarise Liberals, making it uncertain whether it will help or harm his reputation. Enemies will see it as being all about Malcolm. His comments will start another round of divisive debate in the ranks.

But his arguments were potent reminders of the stupidity of what happened in August and the present poor state and situation of the Liberal party.

Morrison this week had to deal with an early manifestation of the hung parliament he now must manage.

Crossbencher Bob Katter saw the opportunity to make some gains for his north Queensland electorate of Kennedy during Morrison’s tour of the state, so the maverick MP suggested he might consider supporting the referral of Liberal MP Chris Crewther to the High Court over a possible section 44 problem.

By Thursday Morrison had met Katter, and extracted a pledge of “ongoing support of the government”. Katter had extracted dollops of money for water projects.

Their respective performances this week emphasised the chalk-and-cheese contrast between the former and current prime ministers, a difference being accentuated by Morrison as he seeks to portray himself as a man of the people.

Turnbull was critical of the hard right wing media; Morrison in the past few days has done an interview with Alan Jones and a Sky people’s forum in Townsville hosted by Paul Murray.

Turnbull might have had a penchant for trams and trains with selfies but not the faux bus tour with cheesy videos.

But as Turnbull said of the man who’s inherited the fallout of the August “madness”: “He has dealt himself a very tough hand of cards, and now he has to play them … he has to get on with it.”