If you’re travelling to Asia, you’re probably mindful of the risks of malaria, dengue, or Zika. But authorities are warning Australians to take care to avoid another mosquito-borne disease, Japanese encephalitis, when holidaying in the region, after a spike in cases in Indonesia.

Japanese encephalitic virus is part of the flavivirus family, which is also responsible for Zika, dengue and yellow fever.

Japanese encephalitis occurs in Asia and parts of the western Pacific, from Pakistan through to Papua New Guinea and north to Japan and parts of Russia. Almost 200,000 cases are estimated to occur each year.

Most people infected don’t suffer any symptoms. But around 1% of cases will result in severe illness. Symptoms include fever, headache and vomiting, which can progress to neurological complications, such as disorientation, seizures, and paralysis.

Of those who do suffer severe illness, almost one-third will die; while up to half of those who survive are left with long-term neurological impairment.

There is no specific treatment for the disease, but it can be prevented with a vaccine.

The virus is maintained in nature between mosquitoes and waterbirds, mainly herons and egrets. Pigs are also an important host, especially when they’re kept close to both people and sources of mosquitoes, such as rice paddies or other agricultural areas that use flood irrigation. Outbreaks are also more likely to occur during the monsoon season.

The mosquitoes that transmit Japanese encephalitis virus, especially those belonging to the genus Culex, are usually found in wetlands and drainage ditches, and will be out biting mostly at dawn and dusk. 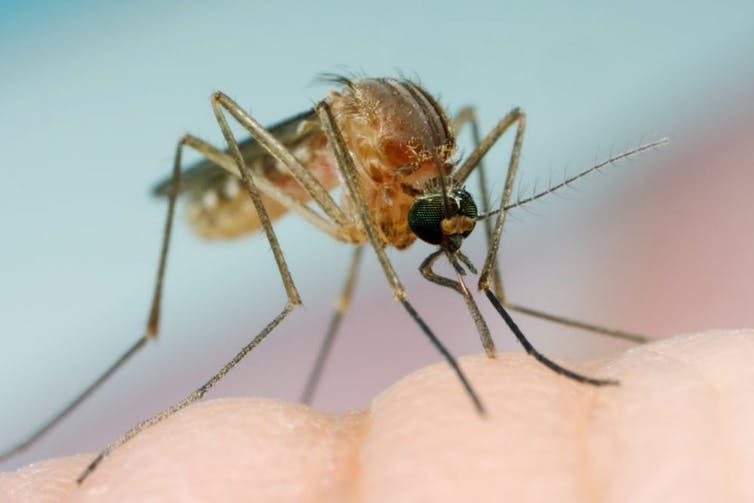 Is Australia at risk?

Given outbreaks of Japanese encephalitis virus have occurred in Torres Strait and neighbouring Papua New Guinea, concern has been raised about the potential introduction and spread of the virus in Australia.

The virus has been detected in sentinel pigs and local mosquitoes from the Cape York Peninsula. These local mosquitoes have the potential to spread a number of closely related viruses. Both wild pigs and waterbirds are also common in northern Australia.

Fortunately, conditions don’t quite seem right for a local outbreak.

Read more: Will the arrival of El Niño mean fewer mosquitoes this summer?

Perhaps our local flaviviruses provide some immunity in local wildlife to infection with Japanese encephalitis virus. Research has shown that local mosquitoes may be more likely to bite local native wildlife (such as wallabies) than pigs, providing some protection for Australia from local outbreaks.

Genetic studies also suggest that local mosquitoes are not as efficient at spreading the virus compared to those in countries to our north.

While the risk of a local outbreak is low, Australian travellers should not be complacent.

How can Australian travellers stay safe?

There is a vaccine for Japanese encephalitis, but few travellers choose to have it, as they’re often told the risks are low unless they’re spending extensive time in rural or high-risk areas.

There is less than a one in a million chance you may be infected during travel to a country that experiences regular outbreaks of the disease. But short trips aren’t entirely risk-free; travellers to Asia still need to take suitable precautions.

A study investigating 55 cases of international travellers becoming infected with Japanese encephalitis virus indicated that most spent over a month at their destination but very few were vaccinated against the virus.

Given some uncertainty around the true levels of activity of Japanese encephalitis virus in some regions, there has been a recent call to re-evaluate the recommendations, which could result in more travellers getting vaccinated. 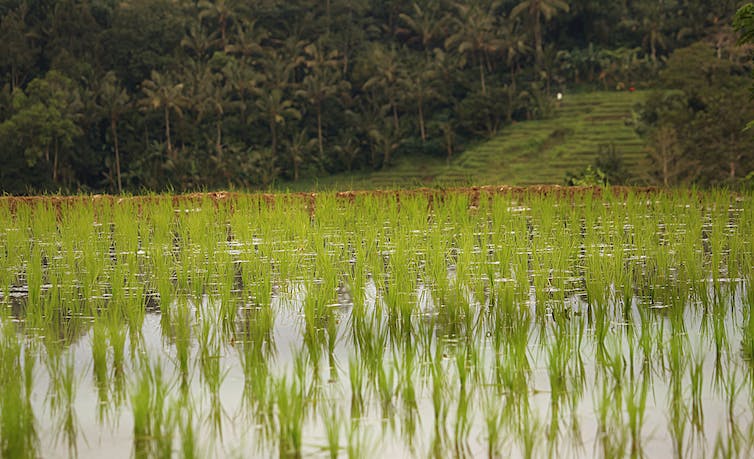 Rice paddies can be a breeding ground for mosquitoes that spread Japanese encephalitis virus throughout Asia. From Flickr user sinta1

Australian travellers heading to Indonesia are being reminded that, although the risk remains low, precautions should be taken to avoid mosquito bites, by:

If you’re venturing out of holiday resorts to rural areas, consider vaccination as well. Even if you’re not, you can still get vaccinated before you go, but discuss this with you local doctor as part of your pre-travel health checks.

It only takes a single bite from an infected mosquito to transmit Japanese encephalitis virus and sometimes you can be in the wrong place at the wrong time.