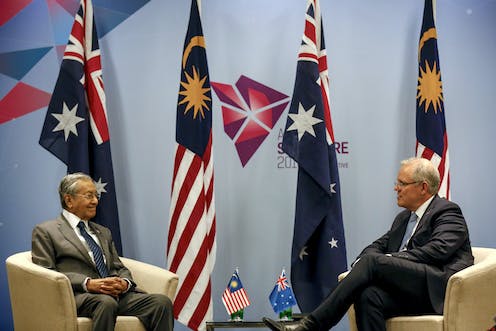 Treasurer Josh Frydenberg has launched a strong attack on Malaysian Prime Minister Mahathir Mohamad, declaring he has “form” in being anti-Semitic.

Frydenberg, who is Jewish, was responding to Mahathir’s criticism of the Morrison government for considering whether to move the Australian embassy in Israel from Tel Aviv to Jerusalem.

Mahathir said on Thursday he had pointed out to Prime Minister Scott Morrison during their meeting at the East Asia Summit in Singapore that “adding to the cause for terrorism is not going to be helpful”.

Frydenberg told a news conference that Mahathir “has called Jews hook-nosed people. He has questioned the number of people that have been killed in the Holocaust.

"He banned Schindler’s List as a movie being shown (in Malaysia), though it showed the amazing story of a righteous gentile who saved many people from persecution.”

Frydenberg made similar comments earlier in the day to ABC, saying Mahathir had “form” on making derogatory comments about Jews.

Frydenberg said Morrison was “absolutely right” to begin a process of considering where the embassy should be.

Indonesia is also highly critical of any embassy change, which was reiterated in the talks Morrison had with Indonesian President Joko Widodo this week. The Indonesians have delayed the signing of the free-trade agreement until Australia makes a decision on the embassy.

Taking a decision on the embassy will be difficult and potentially divisive for the government. Members of the right in the Liberal Party and in the commentariat have been urging the move, but the pragmatists and many in the foreign policy establishment believe the government should stick with the status quo.

While saying that “no one is pre-empting the outcome” of the consideration, Frydenberg in effect made a case for moving from Tel Aviv.

“Australia already recognises Israel’s sovereignty over West Jerusalem. It’s where the Israeli Parliament is. It’s where the Australian ambassador presents his or her credentials. It will be the capital of Israel under any two-state solution,” he said.

“People who say ‘do not put the embassy in Jerusalem’ are making the point that we need to maintain more leverage over the negotiations between Israel and the Palestinians. The reality is that those negotiations have frozen. ”

Frydenberg said Israel was the only country in the world where Australia did not put its embassy in the nation’s capital.

He also criticised what he saw as “a double standard within parts of the United Nations and the Human Rights Council when it comes to Israel, compared with the treatment of other countries.

"The UN General Assembly has passed more anti-Israel resolutions than nearly all resolutions against other individual countries combined.”

Frydenberg said it was inevitable Australia and Indonesia would have different views on the relationship with Israel.

Morrison, now in Darwin to meet Japanese Prime Minister Shinzō Abe, said of Frydenberg’s remarks that he was “filling in the history of (Mahathir’s) record on various issues over time”.

Morrison repeated that Australia decided its own foreign policy, not other countries.

The 93-year-old Mahathir, recently re-installed as Malaysia’s prime minister, was the object of criticism by then-Prime Minister Paul Keating a quarter of a century ago. When Mahathir refused to attend an APEC summit, Keating condemned him as a “recalcitrant”. Mahathir demanded an apology. The incident embittered relations between the two countries.