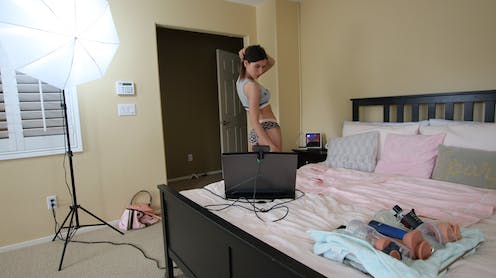 The daily life of a cam performer

“Camming” can be likened to an online strip show where the cam performer uses the webcam on their computer to put on a show for anyone in their chat room. The performer usually sets tipping goals and the more people tip by pledging tokens, the more happens on screen.

Typically, it involves numerous sex toys and ultimately orgasm, but many of the shows get very creative. They can feature anything from fortune wheels and costumes, to “couple shows” with partners and guest appearances from other cam performers.

During the show, viewers get to chat with the cam performer, often requesting sexual acts and sometimes simply asking them questions about their life. There are no fixed rules on length and format of a cam show, but it usually takes anywhere from one to four hours. Many of my informants in Las Vegas cam anywhere between two to six hours a day, multiple times a week.

Cam performers usually run sessions in intervals, timing them to coincide with office hours in big cities on the east coast such as New York and Chicago: one cam show in the morning just before offices open, one during lunch break, and one just before people head home to their families.

Read more: Explainer: what does it mean to be 'cisgender'?

“After they’ve shot you a bunch of times, there usually is a month or two where you don’t get any shoots”, one research participant told me. As a consequence, performers may go several months without a single shoot, which makes budgeting extremely difficult.

Camming is booming and here to stay

At the same time however, camming can be very tough work. One informant told me: “some days I end up crying because people either don’t tip you for hours at a time or tip you just to say nasty things”. Further, cam companies, which host web cam performers, take incredibly high commissions of anywhere between 50 – 70% on every dollar earned by the cam performer.