This is the fourth article in our series, Australian Cities in the Asian Century. These articles draw on newly published research, in a special issue of Geographical Research, into how Australian cities are being influenced by the rise of China and associated flows of people, ideas and capital between China and Australia.

When it comes to access to housing in Australia, the playing field is far from even.

Our recent research has found that “race” matters. Many Australians experience racism and discrimination based on their cultural background.

This is particularly the case for Asian Australians. They experience much higher rates of racism across a variety of everyday settings, but particularly when renting or buying a house.

Read more: A white face can be a big help in a discriminatory housing market

An online national survey of 6,001 Australians measured the extent and variation of racist attitudes and experiences. We examined the impacts of where Australians are born and what language they speak at home on their experiences of racism.

Our research revealed that if you were born overseas, or if your parents were born overseas and you speak a language other than English at home, you are likely to have many more experiences of racism than other Australians. Racism is experienced in a variety of settings –workplaces, educational institutions, shopping centres, public spaces and online.

Survey participants born in Asia were twice as likely as other Australians to experience everyday racism. In fact, 84% of these Asian Australians experienced racism.

For those born in Australia to parents who were both born in an Asian country, rates of racism were just as high (86%). 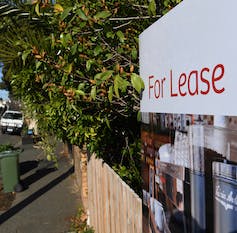 As with the broader pattern of everyday racism, Asian Australians are feeling the brunt of housing discrimination. Almost six in ten (59%) Asia-born participants in our study experienced racism in accessing housing. This compares to only 19% of non-Asian-born participants.

Asia-born respondents were also more likely to report frequent experiences of housing discrimination. Some 13% reported these experiences occurred “often” or “very often”. This is more than three times the average exposure of non-Asian-born Australians.

In particular, participants born in Northeast and South/Central Asia are more frequently exposed to racism in housing. And 15% and 16% respectively reported housing discrimination occurred “often” or “very often”. This compares to only 9% of those born in Southeast Asia.

The survey also found that if you have two Asia-born parents you are highly likely to experience such racism (44%). Similarly, if you speak a language other than English at home (especially an Asian language), you are more likely to experience housing discrimination (45%).

These findings suggest that the owning and occupying of space by Asian Australians is seen as a threat to Anglo-Australian hegemony. Alternatively, or perhaps relatedly, many real estate agents and owners assume Asians are somehow suspect, or will be a lesser quality tenant or owner. This would be an echo of colonial racist thinking in which Asians were seen as biologically inferior and a potential source of racial impurity.

The repression of Chinatowns and more recent moral panics about Indo-Chinese settlement areas in Sydney and Melbourne – such as Cabramatta and Richmond – point to these stereotypes of vice, uncleanliness and chaos. Perhaps this 20th-century troubling of the white spatial order is continuing today.

Sinophobia in Australia is also emerging in debates about housing investment, donations to political parties, university campus politics, the purchase of agricultural land for mining, as well as general concerns about Chinese government influence, geopolitics and human rights issues in China. Public debate is appropriate, but emerging hysteria and sensationalism are shifting into animosity towards people with Chinese heritage in Australia.

Exclusion from an important urban resource like housing can generate profound levels of substantive inequality. This in turn is associated with health issues and poorer access to other elements of life chances like employment, transport and education. It can also generate society-wide issues like segregation and intergenerational inequality.

Australia has laws against racist discrimination in access to goods and services like housing. Our findings, among others, indicate that housing discrimination is more acute for some groups than others, particularly Asian Australians. So where is the coordinated response to this clear injustice?

You can find other articles in the series here.