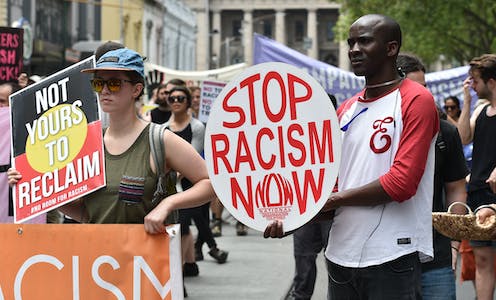 Today, what can be defined as racism and what cannot has become a matter for debate. Every racist caught in the act, whether it be wrongly accusing a black child of sexual assault or running over and killing a mosque-goer, claims not to be racist.

Eric Kaufmann, a prominent professor at a London university, has claimed that “racial self-interest is not racism”. He is joined by others who see talking about race as “unhelpful”, be that from a left-wing perspective that privileges class, or from a conservative one that ridicules “identity politics”.

Black people, Indigenous people, people of colour, Muslims and Jews regularly report being lectured to on racism – and what constitutes racism – by people who have never experienced it.

As Cheryl Harris explained in her landmark 1993 article, “Whiteness as Property”, white people in settler colonial countries such as the US and Australia have benefited directly from being white. This has endowed them with the birthright of neither being owned (as in the case of enslaved people) nor “in the way” (as in the case of Indigenous peoples whose lands were coveted).

Many denials of racism come from feelings of discomfort over this fact, a state referred to as “white fragility”. When attention is drawn to white people’s racial privilege, or the assumptions and structures that prop up racist beliefs are challenged, white people tend to respond with anger and a refusal to engage in the discussion.

LeRon Barton has written that viral videos of police shootings of black people are the “new lynching postcard” – a reference to postcards that were handed out to white people who attended a lynching – and that white people in the US choose not to know the depth of America’s problem of institutionalised racist violence.

Likewise, many Australians are only now becoming aware of the plight of detainees in Australia’s offshore detention camps, after more than five years.

Not seeing racism is integral to what the philosopher Charles Mills has called “white ignorance.” This is not real ignorance, but a wilful one that allows those unaffected by racism to maintain their “innocence” and ultimately protects their privilege, as the academic Gloria Wekker has powerfully argued.

This refusal to acknowledge or engage in discussions about racism creates a dangerous situation of racial illiteracy. Not only does it mean that racialised people are expected to bear the belittling of their experiences, but ultimately that we are all worse off in the face of open white supremacy in Australia and across the Global North.

Neither our schooling nor our media equip us to understand what race and racism are. We have only been told that racism is wrong. And when people feel accused of wrongdoing, they go into denial mode.

But this is unproductive. We need to move away from a moral understanding of racism, which sees it as a problem of “bad” individuals, and towards a systemic one, which grounds our understanding in the history of European colonialism. And to do that, we need to examine what race is.

Or rather, what race does.

So what does race do?

Charles Mills describes how race continues to exist today in a social-political context.

As the late academic Jose Munoz argues, because it is impossible to adequately theorise race as any one thing, we are better served by looking at what race does. What functions does race perform? How does it continue to reproduce the idea of a natural social hierarchy?

The main problem we face in understanding race is the fixation on the biological. In fact, as Stuart Hall explains, race – a modern phenomenon that developed within the context of European colonial domination – unfurls in three stages: the religious, the cultural and the biological.

Ideas of inherent racial difference between human beings took shape during the Spanish inquisition when the notion of limpieza de sangre (purity of blood) was used to justify the mass expulsion or forced conversion of Jews and Muslims to Catholicism.

This idea then influenced Spanish invaders’ attitudes to the Indigenous peoples of the Americas, whose very humanity they questioned on the basis of their different spiritual beliefs.

It was mainly religious men such as Sepulveda and De Las Casas who were concerned with the question of Indigenous peoples’ humanity. However, race became tethered to culture in the context of European anti-Semitism in the 19th and 20th centuries and the “civilising mission” enacted by colonisers to bring “progress” to Indigenous peoples in Africa, the Americas and Asia.

The biological understanding of race, or the idea that, as Hall puts it, a people’s intellectual abilities, character or temperament is linked to their “genetic code”, came last.

The inference of race in human biology solidified the taxonomical systems devised and used by European anthropologists since the early 18th century. If race was indeed written into the body, the organisation of the world’s people, which previously had used geography as its primary means of hierarchical demarcation, could no longer be denied.

This idea enabled such policies as the forced assimilation of Aboriginal peoples through “breeding” and sterilisation - practices that, as Dorothy Roberts notes, are still used in the US against poor black, Latina and First Nations women.

Read more: How do you talk to kids about racism?

In contemporary times, the focus has turned to debunking the idea of race as a biological category. However, this narrow focus has led us to ignore the myriad other ways race takes effect.

It is important to note that biological ideas of race continue to frame the work of many geneticists and medical practitioners, and that assumptions of links between intelligence and race have not faded away and have an impact on policy-making. However, we do not need to believe in biological differences between human groups for race to still have an impact.

Indeed, the notion that race is purely about biology is at the core of the strident claim that Islamophobia cannot be racism because, as it is said, “Islam is not a race”.

At the same time, commentators such as the British journalist David Aaronovitch, have claimed that anti-Semitism is racism because Jews can be qualified as a racial group. This demonstrates the confusion and ideological grandstanding at play when discussing race.

In fact, though distinct, anti-Semitism and Islamophobia take very similar forms. Each is based on associating all members of the religion and often the religion itself with negative assumptions about the degree of control they have in society. Clearly, then, both are forms of racism.

What does this mean for racism?

Race is not singular. Rather, it weaves together ideas from biology, culture, nationalism and religion to make inferences about whole populations. It is first and foremost a technique for the management of human difference that has been used by states, governments and institutions, such as the police, education, healthcare and welfare, to organise and demarcate between people.

Race can be in play even when it is disavowed because, over the course of modernity, it came to structure the relationship between Europeanness and non-Europeanness, which is often, but not always, equatable to whiteness and non-whiteness.

Racism cannot be “anti-white” because it is does not describe feelings of animosity or hostility; it is not a synonym for prejudice. Ideas of race gave rise to racist ideologies, such as the idea that Europe is the pinnacle of progress and civilisation. This legitimated the invasion and domination of the majority of the world’s peoples, the enslavement of Africans, the theft of land, the assimilation and appropriation of Indigenous cultures and the erasure of local knowledges.

Racism is systemic. While it manifests in individual attitudes and behaviours, it is not produced by them. That is the primary reason it is so difficult to eradicate. The other is its ability to constantly adapt to changing circumstances.

For example, the removal of Aboriginal children from their families at unprecedented rates today does not require the openly racist language of blood quantum and improvement. Nevertheless, both the motivations for their removal – a systemic belief in the inherent inferiority of Aboriginal family structures - and the effects on children and families are the same.

Race is mobile and ever-changing. But ultimately, it serves to maintain white supremacy, at both a local and global level.