It’s been an extraordinary four years since wages grew by anything like the 3-5% per year they used to.

Ever since 2015, wage growth has been closer to 2% per year, moving only in a narrow band between 2.3% to 1.9% and back again. It’s the slowest sustained rate of wage growth since the 1930s great depression.

Opinion polls suggest it will be one of the hottest issues in the lead-up to next year’s election.

It concerns the government directly, because its budget forecasts are based on much higher wage growth, climbing to 2.75% by June next year and 3.25% by June 2020.

Given this, it is not surprising that the stagnation of Australian wages has elicited concern from the Governor of the Reserve Bank, leading business executives, and traditionally conservative international organisations such as the International Monetary Fund.

Some, like Prime Minister Scott Morrison, counsel Australians to be patient, and wait for the forces of supply and demand in the labour market to solve the problem.

As this somewhat ugly graph prepared by the Commonwealth Bank demonstrates, wage growth has fallen instead of increased as forecast in nearly every budget this decade. 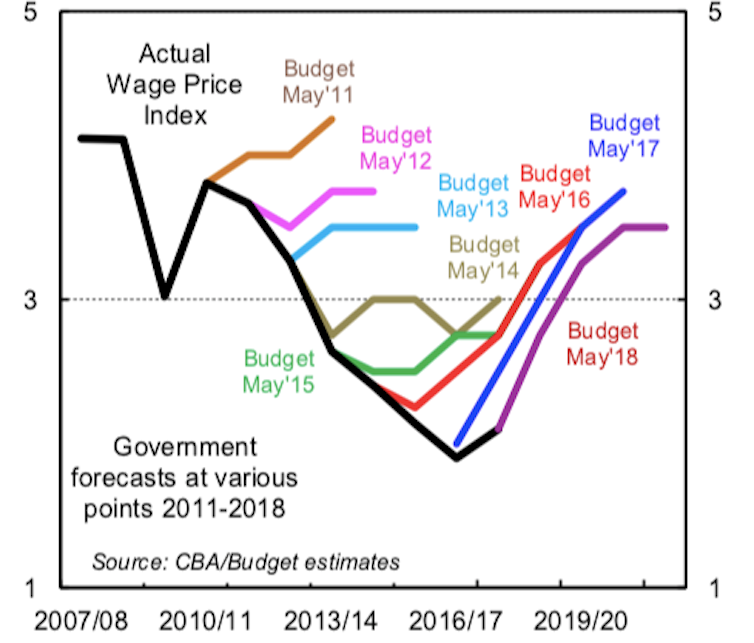 There’s no particular reason to think that wage growth will meet the budget forecast this time either.

In good news, the Australian Bureau of Statistics Wage Price Index rebounded slightly in the September quarter, climbing 2.3 percent year over year (up from 2.1 percent).

But the rebound was almost entirely due to two things that have nothing whatever to do with “market forces”.

Wages are better, but no thanks to market forces

One cause was the unusually large 3.5% increase in minimum wages for award-reliant workers delivered by the Fair Work Commission.

The other was an apparent acceleration of wage settlements in the more highly unionised public sector.

The lesson seems to be that if we want wages to grow, we may have to push them up.

Read more: Why are unions so unhappy? An economic explanation of the Change the Rules campaign

Out of that event has come an edited collection of essays, The Wages Crisis in Australia, published today by the University of Adelaide Press and freely available online.

As it acknowledges, many things have been depressing wages, including the widespread underemployment, technological change, and global competition.

But there has also been a significant weakening of employee power, reflected in the continuing drop in union density and a marked recent dip in collective bargaining coverage.

The institutional framework established by the Fair Work Act has proved to be largely ineffective in countering these trends, and in some instances has perpetuated them.

Among other factors, growth in precarious forms of employment, migrant labour and “indirect” or ‘"fissured" work arrangements (such as sub-contracting, labour hire and franchising) have made workers less likely to join a union or take collective action.

Many of these workers are under pressure to accept sub-standard wages or even unlawful working arrangements.

Governments themselves have deliberately held down wage growth for their own workers and encouraged companies that sell to them to do the same.

There is no one solution. But in our book, we advance a five-point plan that we think might work:

Not everyone will agree with these proposals.

But as the research compiled in our book illustrates, something has to be done. Australia’s once-vaunted reputation as a fair and inclusive society depends on it.

Free digital copies of The Wages Crisis in Australia: What it is and what to do about it, published by can be downloaded from the publisher.