Carbon dioxide (CO₂) emissions from fossil fuels and industry are projected to rise more than 2% (range 1.8% to 3.7%) in 2018, taking global fossil CO₂ emissions to a new record high of 37.1 billion tonnes.

The strong growth is the second consecutive year of increasing emissions since the 2014-16 period when emissions stabilised, further slowing progress towards the goals of the Paris Agreement that require a peak in greenhouse gas emissions as soon as possible. Strong growth in emissions from the use of coal, oil and natural gas suggests CO₂ emissions are likely to increase further in 2019.

Read more: What is a pre-industrial climate and why does it matter?

Strong energy demand is behind the rise in emissions growth, which is outpacing the speed at which decarbonisation of the energy system is taking place. Total energy consumption around the world increased by one sixth over the past decade, the result of a growing global middle class and the need to provide electricity to hundreds of millions of people living in poverty. The challenge, then, is for all nations to decarbonise their economies while also satisfying the need for energy, particularly in developing countries where continued growth in energy supply is needed.

These analyses are part of the new annual assessment of the Global Carbon Project (GCP), published today in three separate papers. The GCP brings together scientists who use climate and industrial data from around the world to develop the most comprehensive picture of the Earth’s sources and sinks of greenhouse gases. 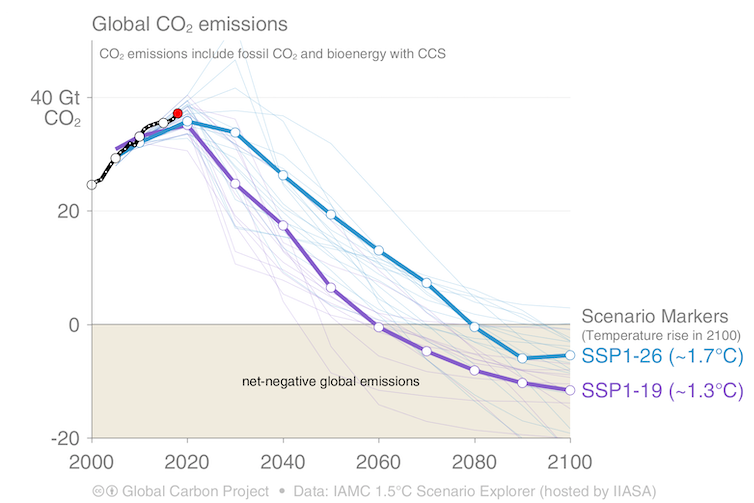 Historical CO₂ fossil fuel emissions (black, red dot is our projection for 2018) and the Shared Socioeconomic Pathways (SSPs) from the IPCC 1.5℃ special report (2018) to stabilise the climate below 1.5℃ and 2℃ warming above pre-industrial levels. Global Carbon Project/Jackson et al. 2018

A surprise in 2018 (and 2017) was the return to growth in CO₂ emissions from coal use after an apparent peak in 2013, although coal emissions in 2017 were still 3% below the 2013 record high. This change was one primary reason for the higher increase in emissions growth in 2018, on top of long-term growth in oil and natural gas emissions. The largest national contributions to the growth in coal emissions came from China and India, while the single largest decline in coal emissions was in the United States, where more than 250 coal-fired power plants have closed since 2010 and more are expected to close down over the next five years.

The growth of emissions from cement production has slowed significantly. 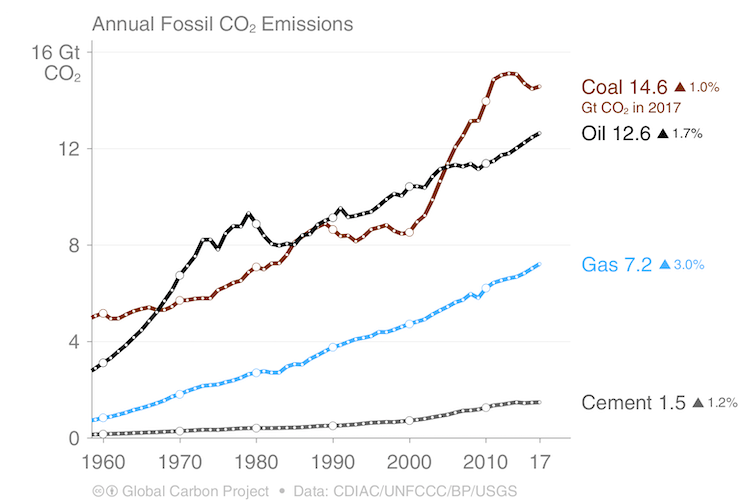 Most countries are contributing to the increase in global fossil CO₂ emissions. However, 19 countries representing 20% of the global emissions, showed declining trends in emissions in the past decade (2008-17) while their economies continued to grow. These countries are: Aruba, Barbados, Czech Republic, Denmark, France, Greenland, Iceland, Ireland, Malta, the Netherlands, Romania, Slovakia, Slovenia, Sweden, Switzerland, Trinidad and Tobago, the UK, the US, and Uzbekistan.

Turning to changes in CO₂ emissions in 2018, unexpectedly, China, which accounts for 27% of global emissions, is set to grow 4.7%, up from 1.7% growth in 2017. Likewise, and despite the long-term trend of emissions declines, the US is set to increase its emissions by 2.5% this year, due to increased heating and cooling demands and oil use. The European Union is set to reduce its emissions by 0.7%, compared with 1.4% growth in 2017, potentially the first reduction since 2014. Indian emissions are expected to grow 6.3% on the back of strong growth in coal use. Greenhouse gas emissions in Australia have increased for the last four years to June 2018. 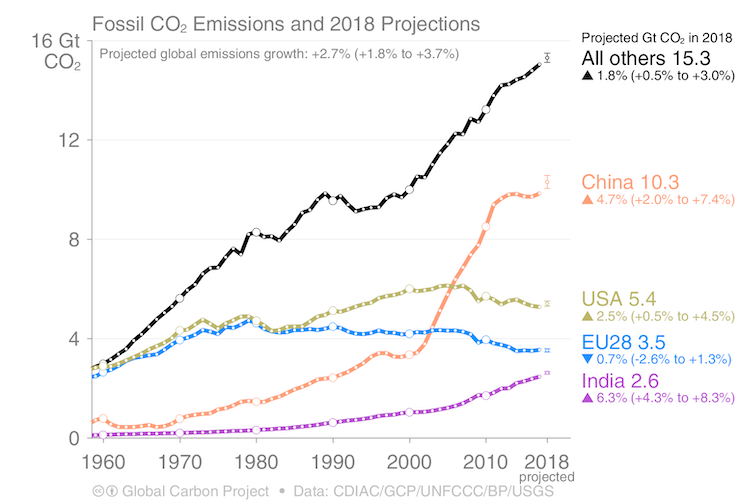 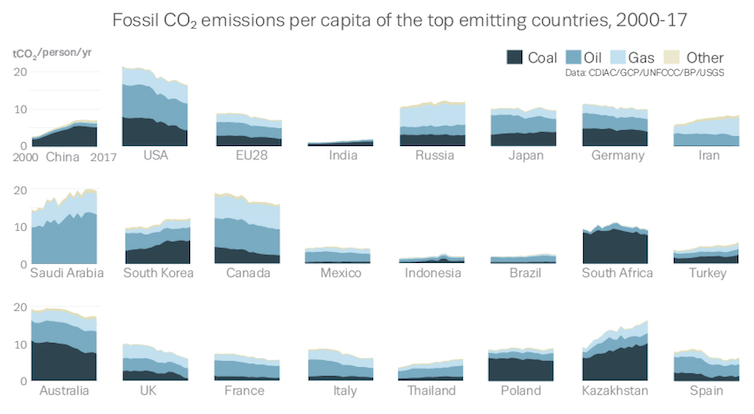 An unprecedented energy revolution is already underway towards cleaner sources of energy. Globally, renewable energy (solar, wind, and biofuels) is growing at an extraordinary rate, with a doubling of the global capacity every four years, albeit starting from a very low base compared with energy generated from fossil fuels. A continuation and acceleration of this trend is consistent with the requirements of the Paris Agreement. However, the same scenarios also call for the equally rapid decline in emissions from fossil fuels, something we do not see in our latest data presented here. The stronger growth in emissions projected for 2018, which is likely to extend into 2019, is inconsistent with agreed-upon climate targets. 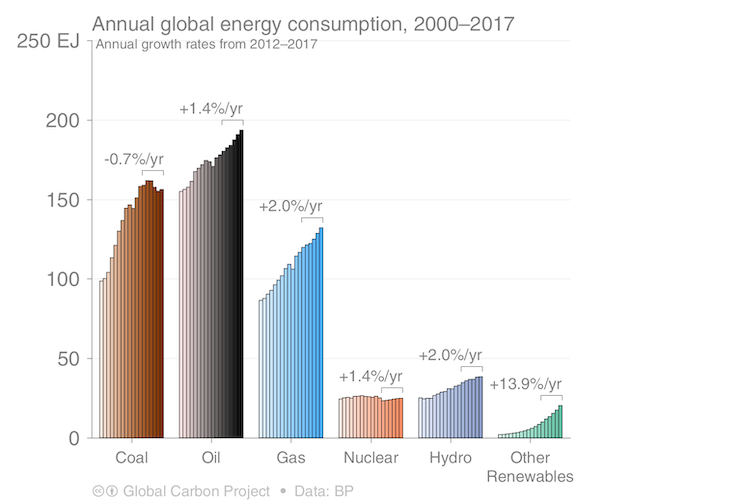 Global Carbon Project The recent Emissions Gap Report 2018 shows large and growing discrepancies among 1) current emissions trends, 2) national emissions reduction committed by countries, and 3) the declining trends required to meet the targets of the Paris agreement. All countries need to increase their mitigation efforts and levels of ambition to reverse the tide of emissions growth, if decarbonisation pathways consistent with the climate targets of 1.5℃ and well-below 2℃ are to be met. Read more: We've got a climate goal of 1.5 degrees – so how do we get there?