As the drought drags on, small communities in eastern Australia are turning to emergency water supplies. Often, this means bore water, which has prompted health fears over its high salt content.

As alarming as this is, drinking water right around Australia can have surprisingly high levels of salt. All capital cities have water salinity levels that are within the Australian Drinking Water Guidelines of 500 milligrams per litre (mg/L) – however the guidelines do not regard salinity as a health consideration, but rather as an “aesthetic” guideline, based on taste.

Read more: Why does some tap water taste weird?

But Australians consume too much salt, and many need to reduce salt in their diet, so the sodium component of salt has key health implications. For people following low-sodium diets for health reasons, the salt in their drinking water may be important. It is generally recommended that people on low-sodium diets drink water with less than 20mg of sodium per litre, but Brisbane, Adelaide and most of Perth have saltier water than this.

Water salinity is commonly reported as “total dissolved solids,” which includes all organic and inorganic substances. “Salts” are soluble compounds of sodium, calcium, potassium, magnesium, chloride, sulfate and bicarbonate. Salts enter our waters from everywhere: the ground, the ocean, the air and living creatures.

We investigated drinking water in Australian capital cities, and some regional locations to compare salt content. When data was not publicly available for capitals, we approached water authorities for data on water salinity.

We found four major groupings for the capital cities:

Water can start tasting noticably salty at 180 mg/L. The figure below shows which districts have less than or more than 180 mg/L. 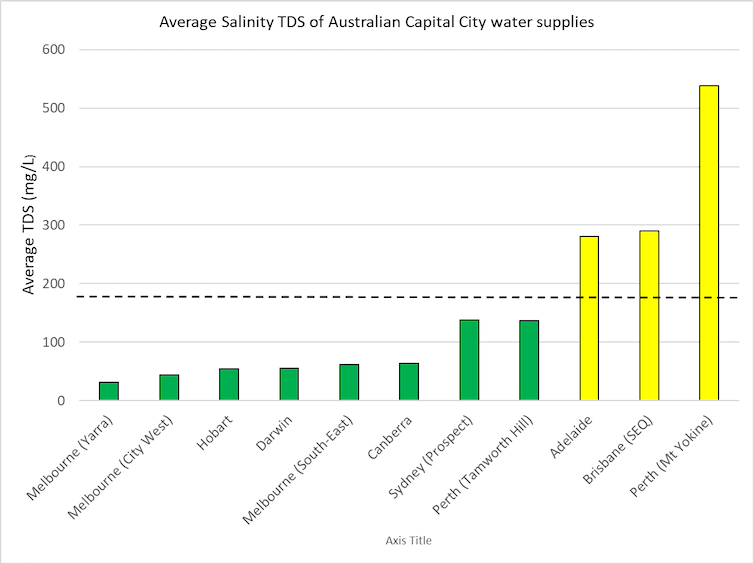 Generally, we all love salt in our food. But one element of salt has potentially serious consequences for many Australians: sodium. It is recommended we consume less than 2,300mg per day. People with high blood pressure should consume less than 1,600mg per day, but the average Australian consumes twice that.

High levels of sodium in the diet are associated with elevated blood pressure (hypertension), for which a sodium-reduced diet is sometimes recommended. Health care professionals may also recommend low sodium diets for patients with kidney disease and cardiovascular disease.

If you’re following a low sodium diet, you may not have considered water as a potential source. It is generally recommended that people on low sodium diets drink water with less than 20 mg/L of sodium.

We obtained sodium data that showed water from Darwin, Canberra, Sydney, Melbourne and Hobart have less than 20 mg/L. However, Perth (most areas), Adelaide and Brisbane have more than 20mg/L of sodium in their water supplies.

However, water supplies can be complex. One district in Perth, Tamworth Hill, has 20mg of sodium per litre, which conforms with the requirements for a low-sodium diet. Another Perth district around 50km away, Mt Yokine, has sodium levels more that six times higher, at 125mg/L. 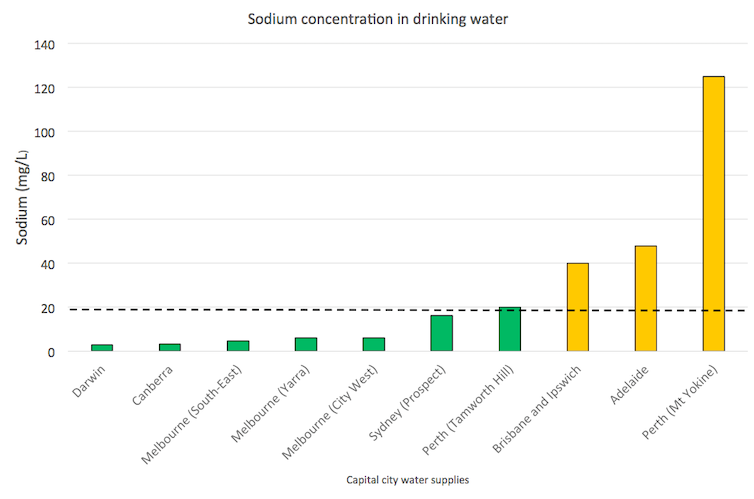 Average sodium concentration for Capital city water supplies. At more than 20 mg/L people on low-sodium diets need to consider sodium in their drinking water – they should discuss with their doctor/dietician. CREDIT, Author provided

Regional and remote regions of Australia often have water with elevated salinity. Tennant Creek and Alice Springs in Northern Territory and Geraldton in WA are three regional Australian cities with sodium content higher than generally found in Australian capitals.

Horrocks in WA has the highest, based on our review of available public data. It is a very small coastal settlement 500km north of Perth. At 408 mg/L it is more than 130 times higher than Darwin’s average sodium concentration.

What can you do about it?

Where medical health professionals recommend a low sodium diet consumption of sodium through drinking water should be considered. If unsure of the sodium content of your water, and if you are on a low sodium diet, then contact your local water supplier. This could also be a topic to discuss with your doctor or other health care providers.

There are a number of small household water treatment systems that use reverse-osmosis to remove minerals. They can provide treated water with much lower sodium content.

Low-salt bottled water could be an option, but caution is needed. Apart from the expense, some commercial bottled waters also have elevated sodium levels. Check the mineral contents on the bottle label, and if you are on a low-sodium diet make sure that sodium is low.

Hard to find this data

One reason for the over-representation of the Northern Territory and Western Australia is simply that the information is available (we applaud them both). We have not been able to find sodium results for many regional and remote water supplies across Australia.

In many cases, water authorities report compliance with Australia’s Drinking Water Guidelines – as is proper – but currently sodium is not measured as a potential health issue.

We suggest sodium should be treated as a health-related attribute of drinking water. It would therefore be monitored in every water supply, and could be usefully advertised. Most people have too much salt in their diet, and it is true that much of this comes from processed food. But in some locations a surprisingly large amount can be from our drinking water.