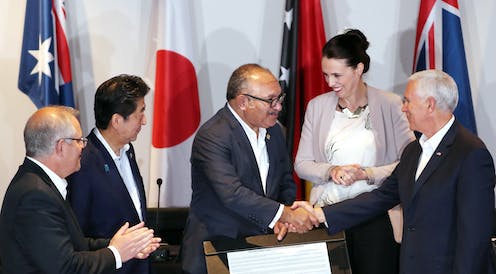 New Zealand Prime Minister Jacinda Ardern stands out on the international stage. In an era of poisonous xenophobia and mean-spirited rhetoric, she has called for more compassion and kindness in politics and has stressed the importance of cooperation.

Ardern is operating in a challenging environment – with tensions between China and the United States being characterised by some as a new Cold War. This was most evident at the recent APEC summit where leaders failed to reach an agreement even on a final non-binding communique.

Ardern has attracted attention because she talks - and does - politics differently. Yet there has been little debate domestically about what exactly New Zealand should prioritise on the international stage. This is highlighted in the current discussions about whether New Zealand should sign up to the UN Global Compact on Migration.

It will take substantial and thoughtful work – by civil society actors, activists, academics, and Ardern’s own government – to spell out a foreign policy platform that would give effect to the aspirations Ardern clearly has for New Zealand on the international scene.

The suite of pressing global problems is well known, from climate change to migration, from global inequality to conflict prevention. There are particular dilemmas for parties on the left. What does it mean to be progressive in this era of widespread dissatisfaction with neo-liberal capitalism? Should progressive parties seek to rebuild the state as an economic actor and accept that this will privilege their own country’s citizens?

Some, such as the new German movement #aufstehen, have argued for more restrictive migration policies. Others, including the [German Green party], are advocating for more open borders. There are strategic choices to be made, and New Zealand’s relatively thin civil society has not as yet provided much guidance about what direction the government should take.

So what could a progressive foreign policy look like today? We have interviewed a wide range of New Zealanders to explore what a values-driven foreign policy would mean for the country.

Official information inquiries revealed internal government documents showing that both the Labour-led Helen Clark and National-led John Key governments expressed an interest in expanding New Zealand’s role in this area. However, neither government translated this into an institutionalised conflict prevention or peace mediation capacity.

In our report, we suggest New Zealand could set up a conflict prevention unit based on our past experiences, both good and bad. This includes Parihaka’s strategic non-violence movement, experiences from the Waitangi Tribunal, our nuclear-free movement and the Bougainville peace talks that New Zealand successfully hosted and facilitated in the 1990s.

We also note the need for decolonisation at home, including a better understanding of the negative effects of colonisation. Māori views need to be part of foreign policy. Without that effort, New Zealand’s advocacy for peace internationally would lack credibility, given the government has not fully addressed the institutionalised racism and economic inequality that are the legacy of historical, colonial injustices.

International trade, people and the environment

New Zealand is well positioned to rethink international trade agreements, given its domestic work on the Living Standards Framework, an emerging alternative to GDP. If New Zealand’s foreign policy flowed out of (and was not disconnected from) the government’s domestic agenda, trade agreements might be reassessed as vehicles to consolidate and support progressive agendas. For example, they might be used to tackle transnational tax avoidance or to cement protections of indigenous rights’ across borders.

Fresh thinking from scholars and public intellectuals can help flesh out the details of this. English economist Kate Raworth has argued we should measure our economy based on whether we are living within the Earth’s environmental limits and delivering the basic resources we need to live (health care, education, energy, democracy). Her work challenges the obsession with growth in GDP and outlines an alternative doughnut economics.

Read more: Is it possible for everyone to live a good life within our planet’s limits?

Todd Tucker, a scholar and fellow at the Roosevelt Institute, has highlighted the need for trade agreements to go forward only if they have substantial union support. Unions are vital stakeholders in international trade negotiations. Not only do they represent the interests of workers, but are critical for addressing domestic inequality.

International Monetary Fund researchers have found a correlation between lower union density and a significant increase in the income share of the top 10%. Genuinely progressive trade agreements should also do more to address global inequalities, and advance global sustainability, rather than just including an environment clause.

Foreign policy debates should include a diverse range of views. Too often – in New Zealand and elsewhere – foreign policy is discussed by a narrow group of predominantly white middle-class experts who speak the technical language of global governance. This alienates many people from foreign policy discussions.

Foreign policy in New Zealand should be made in partnership with Māori. It should draw on the ideas of young people, unions, academics and the private sector.

There are many other areas a progressive New Zealand foreign policy could tackle, including human rights, environmental justice, and feminist foreign policies. Our aim is widen the Overton window and ignite debate at home, and abroad, about what progressive foreign policy looks like. The debate needs to happen if we are to build an international order capable of responding to challenges such as global inequality and climate change. New Zealand might just be able to set an example - in an emergent ethical, participatory foreign policy - for other progressive countries seeking to rebuild their relationships in that changing international order.