2018 has been a big year for video games – and not just because of the games that were released.

We’ve seen broken revenue records, burgeoning discussions about the labour that goes into producing games, and a crack-down on predatory practices that squeeze more dollars out of players.

In the games themselves, we got a heavy dose of nostalgia with new twists on the classics.

The “battle royale” game Fortnite was the most outstanding and unexpected success of the year, hitting 78.3 million players in August 2018 and bumping developer Epic Games to a US$15 billion dollar valuation.

Cementing the economic scale of video-games, Rockstar Games’s Red Dead Redemption 2 had the second highest opening weekend for any media release ever, grossing US$725 million – and outstripping any of the latest Marvel movies . 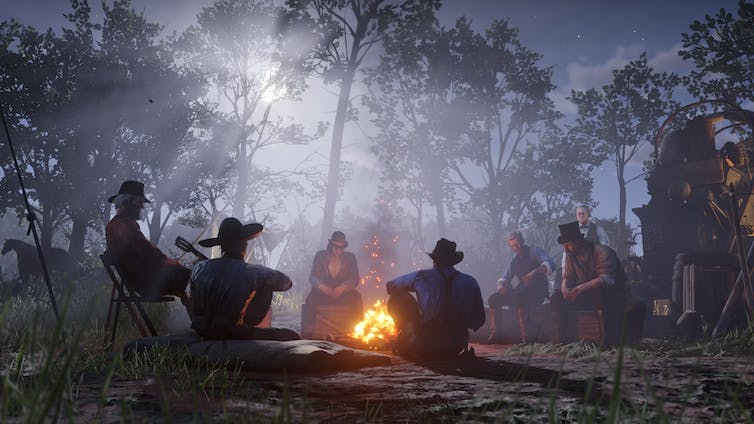 Accompanying these dizzying numbers were reports of “crunch” – excessive and extensive periods of overtime – to get games released on time.

This has led to louder conversations about the labour that goes into making games, and a growing unionisation movement.

Attention also focused on the gambling-like transactions that now pervade “freemium” games. These games are free to play, but include many premium features that can be accessed with an unlimited number of small, in-game purchases (or “microtransactions”).

In June, the Australian Senate referred some of these practices to a senate inquiry, which concluded with a recommendation for a more comprehensive review.

Many of 2018’s most anticipated and celebrated games drew heavily from the past. Games like Enhance Games’s acclaimed Tetris Effect, and Nintendo’s Pokémon: Let’s Go are both re-imaginings of classic games from well-established franchises.

It may be that the biggest MMOG (massively multiplayer online game) lauch for 2019 will be the re-release of the 2004 “classic” version of World of Warcraft.

Gaming hardware manufacturers are tapping into this too, with devices like Nintendo Classic Mini selling out at launch.

Read more: Facebook punts on gaming to lure millennials back to the platform

Digital games are incredibly time-consuming and costly to produce. As such, games are taking on longer life cycles, with increased focus on online multiplayer game modes.

A good example is 2013’s Grand Theft Auto V, which had an initial development budget over US$250 million. Thanks to the enduring popularity of its online mode, the game is now the most profitable media product of all time.

Bethesda has followed this with a (so far poorly received) foray into the online space with Fallout 76, an online version of its popular singleplayer Fallout series.

With the life cycle of game development stretching across multiple years, it’s likely that future game releases will focus on longer life cycles for games and to support online play, where players can continually make regular microtransactions while they play (as is the case of Grand Theft Auto V).

eSports and livestreaming have continued to prove immensely popular in 2018.

Valve’s Dota 2 amassed its largest prize-pool to date, over US$25 million. And new eSports promise to emerge, with Valve releasing Artifact this month – its take on the popular digital card game genre (competing with Blizzard’s Hearthstone).

Further blowing up this space, Epic Games announced over US$100 million in prize money for Fortnite’s eSport in 2019.

Much of the success of games like Fornite can be attributed to the recent and rapid growth of video game livestreaming on platforms like Twitch, where you can watch other people play games.

Fortnite streamer Tyler “Ninja” Blevins exemplifies this as a now global phenomenon transcending Twitch; he even played with TV host Ellen. Ninja amassed a viewership of over 600,000 concurrent viewers when he broadcast his gameplay session with popular celebrities like Drake.

Given the immense popularity of watching games, it is likely we will continue to see games designed to be watched, and not just played.

It’s no coincidence that many of the games mentioned so far didn’t actually launch this year, with various trends changing what it means to talk about a “year in videogames”.

Games like Hello Games’s No Mans Sky have been updated significantly in 2018, following the game’s rocky 2016 launch. These updates have been very positively received – but because it is an online game, the 2016 version people paid for no longer exists.

Another persistent model is to release unfinished games in “early access” mode while development is ongoing. Digital distribution platforms like Steam are a popular venue for early access games. The digital storefront dedicates an entire section to early access games, inviting gamers to:

Discover, play, and get involved with games as they evolve.

Some games have now been in early access for more than five years.

So when is a game really released? The Australian space-trading game Objects in Space was nominated for a 2018 Australian Game Award, but subsequently removed (at the request of the developer) as it is still in early access.

As we see it, iteratively updated games and the “early access” trend represent a mixed blessing. This business model has allowed the invention of entirely new genres of games that can succeed when supported by early access and improved via player feedback.

Coupled with this there is also an increasing trend of “abandonware”, or unfinished games abandoned by their developer despite being sold to players with the promise of future updates and improvements.

In any case, forecasting what games will have the biggest impact in the next 12 months has become close to impossible. Perhaps it is a case for the Frog Detective?