On his 2012 honeymoon to Rome, Facebook founder Mark Zuckerberg took so many photos of the Roman Emperor Augustus’s sculptures that his wife joked it was like there were three people on the honeymoon. The couple even named their second daughter August.

basically, through a really harsh approach, he established two hundred years of world peace (…) What are the trade-offs in that? On the one hand, world peace is a long-term goal that people talk about today (but) that didn’t come for free, and he had to do certain things.

Augustus (27 BCE to 14 CE) was Rome’s first Emperor, who established an enduring monarchy following some 20 years of civil war in the aftermath of the assassination of his adoptive father, Julius Caesar, on the Ides of March 44 BCE.

Augustus has a long line of high-profile admirers. They see him as a great statesman who brought peace to a Roman Republic long afflicted by civil wars. But what “certain things” did he do and how admirable were they?

A prominent contemporary admirer of Augustus is Dr David Engels, a distinguished Belgian Professor of Roman history. He makes a chilling case for an authoritarian, conservative and imperial European New Order, inspired by Augustus, who effectively converted the Roman Republic to an autocracy.

Dr Engels argues Augustan-style authoritarianism would be the best practicable solution to Europe’s current woes as he sees them – mass immigration, low national fertility rates, the decline of the family and traditional values, materialism, egoism, globalisation, insecurity, and a growing democratic deficit caused by spiralling inequality and technocratic tendencies.

This modern day appeal of Augustus is perhaps being echoed in the increasing attractiveness of strongman politics in countries like the US, Russia, Turkey, Italy, Hungary, the Philippines, and Brazil.

But the idea of Augustus as one of history’s greatest statesmen warrants a closer look at his statecraft, particularly how he handled truth and the often bloody and cynical methods he used to establish an autocracy that would endure for centuries. 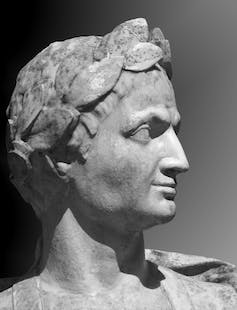 Augustus’s own autobiography is a towering example of “alternative truth”. It’s a boastful retrospective, but other evidence suggests this masterly piece of propaganda closely reproduces the artful politics he adopted after his grand uncle, the dictator Julius Caesar, was stabbed to death in the Senate in 44 BCE.

In the first chapter, Augustus boldly claims that, roughly one year after Caesar’s assassination, he raised a private army at the age of 19 “to restore liberty to the Republic when it was oppressed by the tyranny of a faction”.

Hammering home his point, Augustus goes on to assert that:

when I had extinguished the flames of civil war, being in absolute control of affairs by universal consent, I transferred the Republic from my own control to the will of the Senate and the Roman people.

However, the reality, couldn’t have been more different.

Apart from the fact that it was a criminal offence under Roman law to raise private militias for factional subversion of the state, he didn’t come out of the blue as a selfless saviour in that fateful spring of 44 BCE.

Augustus, or Octavius as he was then known, was already poised to be second-in-command in Caesar’s New Order. Styling himself as the Young Caesar, he made a brazen bid to reclaim rank and stature by ruthlessly rekindling the flames of civil war. This shattered the compromise peace made between Mark Antony, Caesar’s foremost lieutenant, and Caesar’s leading assassins, Brutus and Cassius.

His claims he took control by universal consent and subsequently restored the traditional republican polity after his military victory over Antony and Cleopatra 30 BCE are equally mendacious.

Augustus repeatedly conducted murderous as well as bloodless purges of the aristocracy from November 43 through to 29 BCE, repressing all political opposition. Late in 43, he and his then allies Mark Antony and Lepidus ruthlessly proscribed over 300 senators and 2,000 equestrians (the lower aristocracy and business elite). Many were hunted down and butchered in plain view, including the great orator and republican Marcus Cicero.

In 28 BCE, after his final civil war victories and shortly before his much vaunted “restoration” of the Republic, he removed another 40% of the Senate, reducing their numbers to 600.

In 27 BCE, when he finally laid down his official emergency powers – powers he had alleged were needed to confront real or imaginary crises he and his henchmen had engineered – a compliant Senate promptly reinvested him with a vast, 10-year military command. This command was the cornerstone of his autocracy, and was suitably renewed every 10 years, invariably justified on the grounds of ongoing military exigencies in the provinces.

One major consequence of this charade was unprecedented imperialist expansion and warfare. At enormous human and material cost, Augustus would more than double the size of the Empire and add more territory to Rome’s provincial dominion than any Roman before or after him – so much for his much-vaunted peace, the Pax Augusta.

At the same time as he consolidated his power, Augustus was careful to ensure that Rome’s ancestral republican institutions and political bodies were scrupulously upheld. This created a powerful, if hollow, semblance of normality and traditionalism. He studiously avoiding the odious title of dictator, no doubt mindful of the fate of Julius Caesar.

Read more: Mythbusting Ancient Rome – the truth about the vomitorium

By his ruthless and cynical actions, Augustus arguably wrote the script for some of the most notorious tyrants of the 20th century – Stalin and Hitler.

The Soviet Constitution of 1936, duly adopted by popular vote and put into effect by Stalin, demonstrably enshrined a number of democratic and liberal rights. For example, Article 125 declared:

In conformity with the interests of the working people, and in order to strengthen the socialist system, the citizens of the USSR are guaranteed by law: freedom of speech; freedom of the press; freedom of assembly, including the holding of mass meetings; freedom of street processions and demonstrations.

But in true Augustan style, Stalin’s Constitution was marked by a staggering divide between theory and practice. 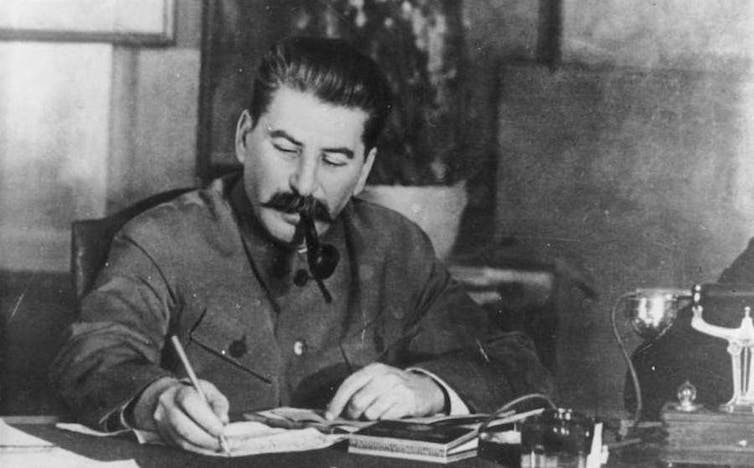 Did Stalin draw on Augustus’s example in drafting the Soviet Constitution of 1936? Wikimedia commons

Similarly, Hitler’s power grab in Germany in 1933 was right out of the Augustan playbook. Blaming an arson attack on the German Reichstag (parliament) on the Communist opposition, Hitler was able to pressure an ailing President Hindenburg to decree him emergency powers. This nullified many civil liberties and transferred key state powers to his Nazi-led government.

Hitler then ruthlessly exploited these powers to repress and imprison anyone deemed inimical to the Nazi regime. A month later, with his opponents purged, he passed a law allowing him to directly enact laws, bypassing the Reichstag.

By virtue of these laws, Hitler secured a legal dictatorship in the best Augustan tradition, allowing him to rule by decree while the democratic Weimar Constitution technically remained in force until the Allied Occupation.

Given the actual history of Rome’s first emperor and his subsequent imitators, anyone looking to Augustus and his methods as a source of inspiration and a role model for crisis management should be very careful what they wish for.