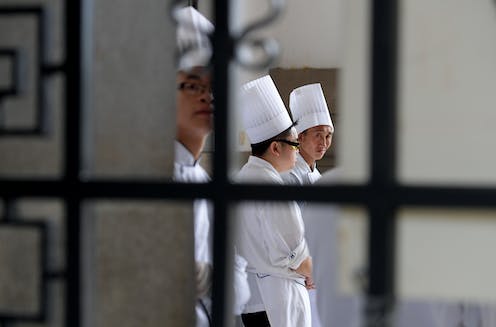 This article is part of a series focusing on the politics of food – what we eat, how our views of food are changing and why it matters from a cultural and political standpoint.

Another year, another list of the World’s 50 Best Restaurants. And another round of Michelin stars, Good Food Guide hats, and Gourmet Traveller Top 100 Restaurants in Australia.

These days, there are more restaurant awards than you can poke a stick at. The World’s 50 Best list has long been a target for criticism for its gender imbalance and heavily Eurocentric perspective. (There is now an Asia’s 50 Best and a Latin America’s 50 Best list, because presumably “Asia” and “Latin America” are not included in “World”.)

Though it is well known the process behind choosing the restaurants for this list is pretty arbitrary, it still carries weight in the restaurant world, with rankings used as a selling point, including here in Australia. Judging by the fanfare that heralds another night of awards, and the rush of increased interest that follows the enthusiastic media coverage, restaurant awards and lists are here to stay.

Recently, an ABC article ruffled some feathers by providing an audit of which chefs and restaurants win awards in Australia. The perhaps not-so-surprising finding: European (namely, Italian) restaurants outnumber Asian restaurants in the number of accolades, year after year.

There are multiple factors that play into this. The framework of “professional” cooking is French and has long been acknowledged as an “art” or “skill”, while “ethnic” food continues to be othered as a reflection of “culture”. The chefs representing most top-end restaurants and writers at most major food publications also remain predominantly white.

This is part of the reason why restaurants that offer dining experiences that hew toward the European notion of high quality - tablecloths, quiet rooms, attentive service - are regarded as “better”, or more worthy, than the Chinese or Thai place that may emphasise feeding you quickly and efficiently. It follows that the people winning the awards are, by and large, also white.

Dig a little deeper and another trend emerges: the few “ethnic” restaurants in Australia that are routinely feted and held up as high-end are largely owned or run by white men.

Chin Chin, for example, is run by Chris Lucas’ restaurant group, while Spice Temple is owned by Rockpool Dining Group, with Neil Perry at the helm. Supernormal is part of the Andrew McConnell empire, while Cho Cho San is owned by Jonathan Barthelmess and Sam Christie.

As the authors of the ABC article point out, plenty of cooks in restaurant kitchens are from diverse backgrounds, while the people in leadership positions are mostly white (sometimes capitalising on the food of different cultures). It should be noted, however, that one of the most prominent and respected chefs in Australia is Tetsuya Wakuda, who is Japanese. Dan Hong has headed up Mr Wong and Ms G’s, and Victor Liong is making waves in Melbourne, but they are comparatively rare examples of high-profile Asian chefs outside Asia.

The question of “ethnic” food prepared by “non-ethnic” chefs or served at restaurants with “non-ethnic” owners has recently become a sensitive issue in the United States, in particular. Given the fraught relationship all colonised countries have with race, however, this debate should also be happening elsewhere – including here in Australia.

Power dynamics and the influence of the media

While it can feel discomfiting for a person of colour to see a white person profit from the food of marginalised cultures, if done respectfully, with a deep, well-researched understanding of the culture that informs the food, it can also be seen as someone exploring a different culture and translating it to a wider audience. Maybe.

But there are broader dynamics at play beyond race – who has access to power, and what kind of power, and why. These are issues that tend to be glossed over. Understanding these dynamics will go some way to explaining why things are, and remain, the way they are.

Duck your head into any kitchen, anywhere in the world, and you will typically see workers from a diverse range of backgrounds. Often in Western countries, they are predominantly immigrants, doing what they can to make a living. They are the dishwashers and line cooks, performing the manual labour, while the head chef inspects everything at the pass before it goes out to the dining room.

Read more: Recipes for racism? Kitchen Cabinet and the politics of food

Of course, these are also the chefs who have the budget to travel widely and extensively for “research”, gleaning the knowledge to replicate the traditional foods found in exotic countries. Chefs I spoke with in my research commented that it’s hard to know which comes first - great food that attracts media attention, or great PR that attracts media attention pushing you to be a better chef.

The quintessential “celebrity chefs” (like Neil Perry, Peter Gilmore, or Matt Moran) are, by and large, articulate and passionate about their work, their produce and their industry. They have generally, over time, been trained to be comfortable in front of a camera, or a roomful of media. Many now have PR firms fielding requests for their time; there are even PR firms that specialise in food content and working with restaurants.

Read more: Jamie Oliver's 'jerk rice' is a recipe for disaster – here's why

The positive media attention of restaurant lists and awards relies on a positive media image of cooking as an artistic pursuit. Thanks to shows like MasterChef and Chef’s Table, we have been presented with a specific (and mostly false) cultural narrative: being a chef is glamorous and fun.

But as Australian restaurant legend Gay Bilson lamented at the most recent Symposium of Australian Gastronomy, in many ways, heightened media attention erases the labour that goes into cooking and hospitality - hours of working over a hot stove, of being on your feet all day, of constantly meeting the demands of other people, day in and day out.

The immigrants who run the local Chinese place in your neighbourhood are far less likely to get this kind of attention, and therefore less likely to enjoy the mobility that being a chef spotlighted in the media affords.

Some argue that more people of colour and diverse cultural perspectives in food media will help expand the way we understand the food world.

But it is also not the sole responsibility of people of colour to convince others that food from their cultural background is as worthy of acclaim as European food.

So what’s the answer? It’s always going to be complicated. But as consumers, it’s up to us to think a little more critically about restaurant awards. It’s on us to chat to the people cooking for us and get to know what happens in kitchens, to read more widely and understand what we’re eating.

It is not enough to get excited about the diversity of food in our multicultural cities. We need to engage with and understand the work and power structures that exist in the kitchens that make our food, and the media culture that tells us about what we’re eating, and who cooks for us.

Read other articles in the politics of food series here.