Australia aims to “virtually eliminate” HIV transmission by 2022, according to the health minister’s new national HIV strategy. This ambitious goal has been made possible by biomedical HIV prevention, a new and highly effective way of preventing HIV using medications.

But new inequalities are emerging between those who can and can’t access these medications because of their Medicare eligibility. These inequalities may undermine the success of HIV elimination in Australia and threaten Australia’s international reputation as a safe place to study, work and live.

PrEP and U=U have revolutionised HIV prevention. PrEP (or pre-exposure prophylaxis) is where someone who is HIV negative takes medication every day to prevent them becoming HIV positive and is close to 100% effective when taken regularly.

U=U (undetectable equals untransmissible) is where someone who is already HIV positive takes medication every day to keep them healthy and reduce the risk of spreading HIV to another person to zero. (The U refers to “undetectable viral load” which means the virus can no longer be detected in the blood.)

Despite high levels of condom use in Australia, the number of people diagnosed with HIV every year, mostly gay and bisexual men, had been gradually increasing. From a low of 722 in 1999, it had crept up to more than 1,000 per year by 2012.

PrEP has been available under Australia’s subsidised Pharmaceutical Benefits Scheme since April 2018 and all people living with HIV have been recommended to take treatment since 2015. This has resulted in rapid drops in new HIV diagnoses in 2017 and 2018, particularly new infections in gay men in inner cities. This is great news.

The bad news is that while condoms where cheap and available everywhere, to access these medications cheaply in Australia you need a Medicare card. You also need to see a doctor and have regular blood tests.

Australia is inviting more and more people to study, work and live here on temporary visas. Most of these temporary visa holders are not eligible for Medicare. To take PrEP without a Medicare card, you need to import the medication from overseas. To take HIV treatment without a Medicare card, you need to find one of the limited number of public sexual health clinics who have informal arrangements with private pharmaceutical companies to provide medication.

To access the sort of health care Australians take for granted, such as public hospitals and clinics, Medicare ineligible patients are required to pay up-front frees and on occasions even to give contact details in their home country. A young person being asked for their parent’s address and phone number would clearly discourage someone for seeking care for HIV.

My research shows newly arrived Asian-born gay and bisexual men, most of whom are overseas students and are not Medicare eligible, are four times more likely to become HIV positive in the four years after arriving in Australia compared to their local peers. This is despite overall fewer sexual partners and more condom use. Other research shows once they become HIV positive, this group have delayed HIV diagnosis.

Australia grants more than 1.5 million temporary visas every year, including more than 750,000 student visas. These visitors are vital to our economy: overseas students bring in A$30 billion per year; temporary workers provide valuable agricultural labour. While we encourage and benefit from these short-term arrivals, we don’t provide for their health. Although we do require they take out private insurance, as I understand it, it rarely covers the medication for PrEP or HIV treatment. 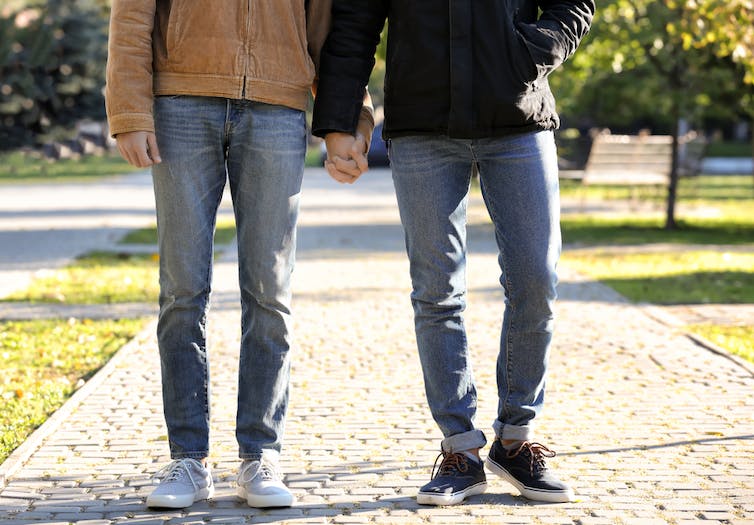 It’s in both of our best interests

Why should Australia care if temporary visa holders in Australia could be at increased risk of HIV infection? Compassion alone ought to be enough for us to want to protect vulnerable young people who come to our country full of excitement and hope and to our mutual benefit.

Many will return home to countries where people living with HIV experience bad health outcomes, stigma and discrimination. Some might have wished to eventually immigrate to Australia, a process that becomes more difficult for people with chronic diseases.

But there are other reasons. Just like vaccinations, in a phenomenon called herd immunity, new infections plummet and everybody is protected when there is a high proportion of people taking PrEP and HIV treatment. Like with vaccinations, if parts of the community are not covered, the risk is higher for everyone.

In public health terms, everybody has the same potential to be exposed to and transmit HIV infection, based on their intimate relationships. It makes no public health sense to only protect those who are eligible for Medicare. The result is that the tens of millions of dollars being spent on biomedical HIV prevention will be less effective.

Read more: Fewer men who have sex with men are using condoms when taking PrEP, and that's OK

Australia has successfully eliminated tuberculosis. All government funded hospitals and clinics are specifically required to provide free of charge any clinical service, test or medication related to TB, irrespective of Medicare eligibility or visa status.

The reasons for this are obvious, as are the benefits to our nation. This could easily be extended to HIV at a moderate cost which would be more than outweighed by the cost savings of fewer HIV infections in Australian citizens and permanent residents.