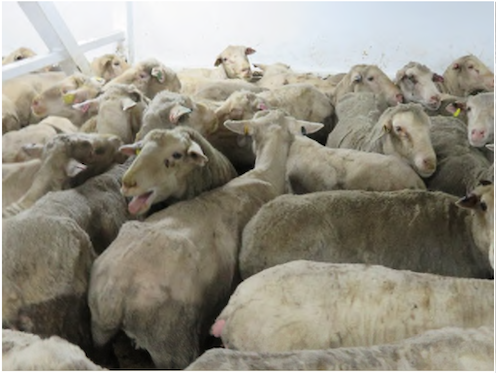 Official reports and photos from observers appointed by the government covering eight live export voyages from April to June last year have documented further evidence of the suffering experienced by many animals.

The notes and images – obtained by the RSPCA under freedom of information – reveal sheep showing symptoms of “moderate to severe heat stress”, the animal welfare organisation says.

Much of the 800 pages of material was heavily redacted and access to video has been refused. Among the reasons given for the extensive “whiting out” was that publication could cause damage to Australia’s international relations. Other reasons were that release would be against the public interest or breach confidentiality.

The Agriculture Department has on its website summaries only of observers’ reports. The reports started to go up in November but they include earlier voyages.

Asked about the FOI material, the department told The Conversation that the independent observer report process had been overhauled since the period covered by the FOI, and gave “unprecedented transparency”. It said the release of the entire early versions and video footage “would require confidentiality wavers from the entire vessel crew which is extremely difficult to obtain”.

The FOI material comes as the future of the trade hangs in the balance. The government has its report on heat stress out for public consultation – and this report’s conclusions could end the trade during the northern summer.

Meanwhile the industry has been pushing back against the pressure to drastically reduce or end the industry.

Recently it has been alleged Animals Australia paid for the footage, showing sheep in appalling conditions, obtained by a whistle blower on the Awassi Express in 2017. When it appeared in April 2018, this footage prompted a massive public backlash and a government overhaul of the industry.

A recent email exchange was also leaked in which a potential whistle blower offered to turn off the ventilation on a ship for a time to worsen conditions and get footage. In a strong response from Animals Australia he was told not to do so.

Animals Australia has stood by the evidence it provided of cruelty on the Awassi, stating that its veracity has been confirmed by department investigators and expert veterinarians. It has accused industry sources of trying to set it up in the email exchange and has welcomed a government enquiry into industry allegations.

It has not responded publicly to the claim it provided money to the whistle blower, although it says it has directly briefed senior department investigators on the facts.

The government last year put the inspectors on voyages as a result of the outcry triggered by the Awassi images.

RSPCA Australia senior policy officer Jed Goodfellow said the conditions described and photographed in the FOI material “represent the industry on its very best behaviour after the multiple disastrous journeys of the Awassi in 2017.

"And yet, once again, we see conditions that would absolutely horrify the average Australian, and the average sheep farmer”.

Internal temperature readings of sheep were recorded at over 40 degrees – indicative of severe heat stress.

The RSPCA describes many of the photos of sheep on these voyages as “reminiscent of the Awassi Express evidence”.

Goodfellow said that “perhaps even more alarming than the evidence of continuing suffering on board these ships are the pages and pages of redacted information, consistently where management of animals and heat stress on board are discussed.

"The department has also flat out refused to release the video footage taken on board the vessels, which is the only real means of truly appreciating the animals’ behaviour and condition during the high heat stress periods,” he said.

Labor is committed to phasing out the trade if it wins the election.