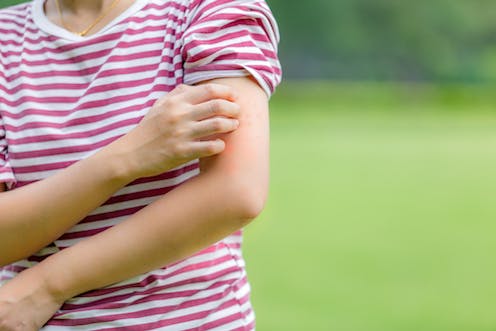 We’ve all experienced the unpleasant sensation of being itchy. For many years, scientists suspected that pain and itch were the same thing, only differentiated by their intensity: itch was just light pain, and pain was strong itch.

But we now know these two sensations are perceived very differently. Recent research found itch is sensed through its own dedicated nerves, independent of the pain pathway.

How do we feel itch?

Acute itch (medically known as pruritus) is usually caused by something harmful, such as biting insects or allergic chemicals on the skin, as a warning signal to protect us from potential threat.

After detecting this stimuli, cells in the skin (called keratinocytes) communicate with immune cells between the layers of the skin. In order to clear away any potential invading pathogens, the immune cells release chemicals such as histamine, serotonin, and proteases. These then activate sensory fibers which initiate the transmission of a warning message.

Several different molecules and cells in the nerves and brain of animal models have been shown to mediate the transmission of the itch signal from skin to brain through the spinal cord.

Traditionally, itch is separated into two pathways, depending on whether they respond to anti-histamine medicine or not (this is the medicine you take to prevent hay fever). Histamine activates its own sensors, while the other type (non-histaminergic pruritogens) use other receptors to fire the itch-detecting cells.

Read more: Health Check: how do I tell if I'm dehydrated?

The interaction between itch and pain/touch

Pain and itch are clearly distinct sensations that provoke different responses. When your hand senses a fire, you will definitely withdraw your hand immediately; by contrast, when you get bitten by a mosquito, you’ll scratch to get rid of the irritation without hesitation. This tells us something about the threat level involved with each sensation.

Although itch has its own messengers, the sensation does also share some sensors with the sensations of pain and touch. This is why pain can counterbalance the sensation of itch – like when you apply frozen peas to an itchy skin condition such as eczema. And why a light touch can provoke itch (tickling).

Why scratching both quenches and enhances itch

Usually when we feel an itch, we scratch it. But sometimes the more we scratch, the itchier we feel. This vicious itch-scratch cycle becomes a serious problem for patients with dry skin and dermatological conditions such as atopic dermatitis and psoriasis.

This is because excessive scratching damages your skin or causes a secondary infection (such as a fungal infection), which worsen the itching.

Scratching might be the most convenient and effective way to remove irritants when you feel itchy from an insect bite or poisonous plant. But for strong itch stemming from other factors such as dry skin (xerosis), eczema, liver disease or kidney failure, you may have to seek medical treatment.

Your doctor will prescribe a medicated cream to apply to the site of the itch. This might be an anti-fungal cream to kill the fungus that has developed.

For the chronic itch associated with skin conditions, internal diseases, neurological diseases or other emotional problems, unfortunately, there is currently no effective treatment for itch as we’re not entirely sure what’s happening in the brain to cause itch in these circumstances. If itching persists or worsens, stop scratching and go see a doctor.