This is the first of two articles looking at the increasing reliance of Australian cities on desalination to supply drinking water, with less emphasis on alternatives such as recycling and demand management. So what is the best way forward to achieve urban water security?

Removing salts and other impurities from water is really difficult. For thousands of years people, including Aristotle, tried to make fresh water from sea water. In the 21st century, advances in desalination technology mean water authorities in Australia and worldwide can supply bountiful fresh water at the flick of a switch.

Achieving water security using desalination is now a priority for the majority of Australia’s capital cities, all but one of which are on the coast. Using the abundance of sea water as a source, this approach seeks to “climate proof” our cities’ water supplies.

Read more: Cape Town is almost out of water. Could Australian cities suffer the same fate?

Perth and Adelaide have relied most on desalination to date. Canberra, Hobart and Darwin are the only capitals without desalination.

The drought that changed everything

From the late 1990s to 2009 southeastern Australia suffered through the Millennium Drought. This was a time of widespread water stress. It changed the Australian water industry for ever.

All major water authorities saw their water storages plummet. Melbourne storages fell to as low as 25% in 2009. The Gosford-Wyong water storage, supplying a fast-growing area of more than 300,000 people on the New South Wales Central Coast, dropped to 10% capacity in 2007.

These were familiar issues in locations such as Perth, where the big dry is epic. For more than four decades, the city’s residents have been watching their supply of surface water dwindle. Remarkably, only about 10% of Perth’s water now comes from this source.

Perth’s two desalination plants have a combined output of up to 145 billion litres (gigalitres, GL) a year. That’s nearly half the city’s water needs. Both have remained in operation since they were built.

Read more: Is Perth really running out of water? Well, yes and no 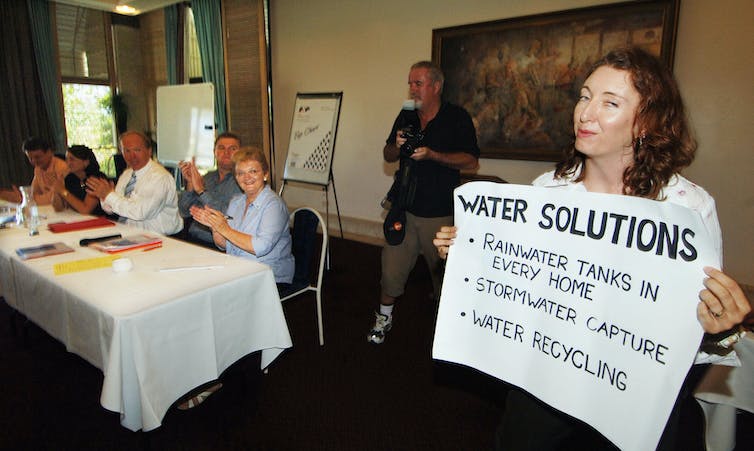 The Queensland Labor caucus applauded a protester advocating the alternatives in 2007, but by 2009 the Gold Coast desalination plant was ready to supply up to a quarter of southeast Queensland’s needs. Dave Hunt/AAP

Design, construction and maintenance costs of these industrial plants are high. They also use massive amounts of electricity, which increases greenhouse gas emissions unless renewable energy sources are used.

Another concern is the return of the excess salt to the environment. Australian studies have shown minimal impact.

Just as many of the massive new desalination factories were completed, and proudly opened by smiling politicians, it started raining. The desalination plants were switched off as storages filled. However, water consumers still had to pay for the dormant plants to be maintained – hundreds of millions of dollars a year in the case of the Melbourne and Sydney plants.

Bringing plants out of mothballs

Now drought has returned to southeast Australia. Once again, many capital city water storages are in steep decline. So what is the response of water authorities in the desal age? Not surprisingly, more desalination is their answer.

One by one the desalination plants are being switched back on. Sydney has just begun the process of restarting its plant, which was commissioned in 2010. Adelaide has plans to greatly increase the modest output from its plant this year. The Gold Coast plant, which can also supply Brisbane, is operating at a low level in “hot standby” mode. 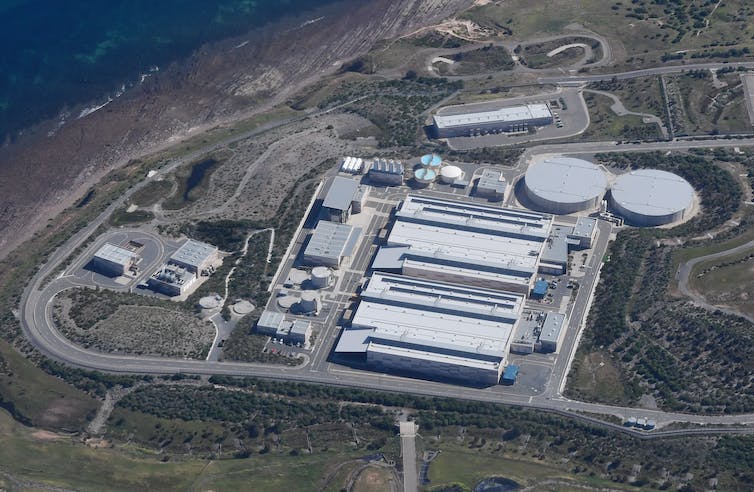 The Adelaide desalination plant can produce up to 100 gigalitres a year – about half of Adelaide’s annual water needs. Sam Mooy/AAP

After a dry winter, Melbourne Water has advised the Victorian government to make the largest orders for desalinated water since its plant, able to produce 150GL a year, was completed in December 2012. Mothballed for more than four years, it supplied its first water to reservoirs in March 2017. The recommended annual order of 100GL from April this year is almost one-quarter of Melbourne’s annual demand. Plant capacity is capable of being expanded to 200GL a year.

When bushfires recently threatened Victoria’s largest water storage, the Thomson dam, the government said desalinated water could be used to replace the 150GL a year taken from the dam.

Sydney’s plan for future droughts is to double the output of its desalination plant from 250 million litres (megalitres, ML) a day to 500ML a day. This would take its contribution from 15% to 30% of Sydney’s water demand. 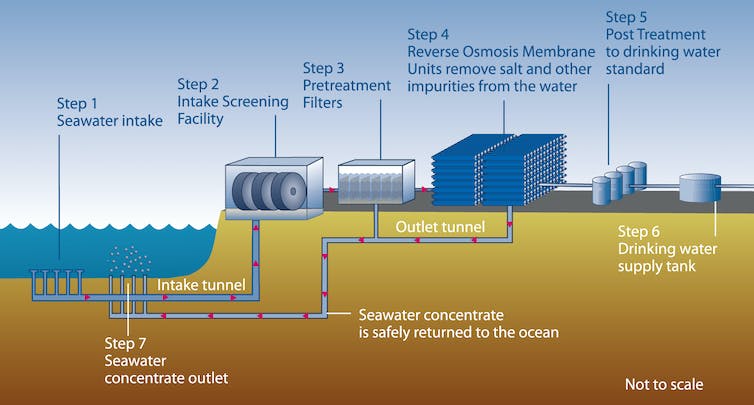 Being close to the sea is essential for a desalination plant the size of Sydney’s, which can supply 91GL a year – around 15% of the city’s needs – and is designed to double that in future. Sydney Water/AAP

Perth, Adelaide, Melbourne, Brisbane and the Gold Coast already have the capacity to supply larger proportions of their populations with desalinised water as required.

What about inland and regional settlements across Australia? Large-scale desalination plants may not viable for Canberra and other inland centres. These regions would require sufficient groundwater resources and extraction may not be environmentally sound.

How much, then, do we pay for the water we use?

The plants supplying our biggest cities cost billions to construct and maintain, even when they sit idle for years.

The Australian Water Association estimates the cost of supplying desalinated water varies widely, from $1 to $4 per kL.

In fact, water costs in general vary enormously, depending on location and how much is used. The pricing structures are about as complex as mobile phone plans or health insurance policies.

The highest price is in Canberra where residents pay $4.88/kL for each kL they use over 50kL per quarter. The cheapest rate is Hobart’s $1.06/kL.

The issue of water pricing leads on to the question of what happened to the alternative strategies – recycling and demand management – that cities pursued before desalination became the favoured approach? And how do these compare to the expensive, energy-hungry process of desalination? We will consider these questions in our second article.