On a humid night with strong easterlies blowing across the river, the opening night audience for dance-theatre performance Sunset was ushered towards the Sunset Heritage Precinct, on the banks of the Swan River in Dalkeith.

The precinct is currently undergoing refurbishment as a community space and arts centre after many years of disuse. It seems fitting that a piece invoking, in the director’s words, “loss, memory, space and silence”, should be chosen as the initial performance for the venue. It was constructed as a home for destitute men and later became a hospital, with resonances of an asylum (the men’s home had two padded cells). 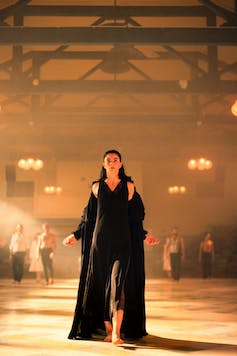 Once inside the precinct, the Sunset audience moved past rooms with piles of dirt and spindly plants, evocative of a deserted building in the outback where “nature” overcomes civilisation. But, this was also a reference to the myth of Demeter, the Goddess of Grain, seeking her daughter Persephone. As the director indicates in the program, the myth had a significant influence on Sunset’s narrative.

More time spent in these rooms to reflect on the institutional architecture and ablution blocks reminiscent of a prison, or asylum, would have helped set the tone for what followed. However, perhaps the number of patrons precluded that, even though 100 is the maximum allowable for any one performance.

From there patrons moved into the “cinema”, a cavernous hall with peeling-paint walls, a small stage at one end, and a servery at the other. Chairs were scattered throughout, allowing spectators the opportunity to stand or sit, or wander at will – though few took up this opportunity.

Thematically, the performance focused on those “universal” themes of love, loss and memory, tied in with the myth of Demeter and Persephone. That spectators may infer something different from what is intended is very much part of the “dreamlike” experience.

While the former home housed, among others, Great War veterans and Depression era homeless, what was evoked for me was the displacement of diaspora. This was in part expressed in the character of Alfred Ganz, a fictional poet performed by Humphrey Bower, complete with an Eastern European accent and with a nod to T.S. Eliot in his poetry titles. 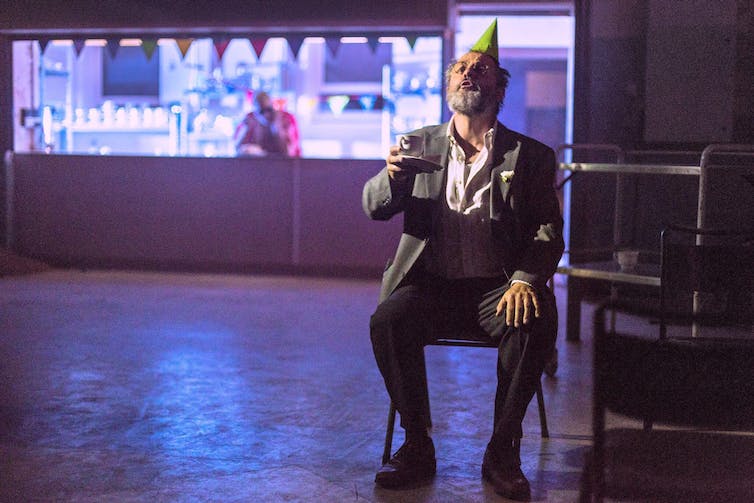 This European influence was evident when the stage was used early in the performance in a conventional manner, inviting the audience to be unidirectional in their focus. This was to witness the performance of a quasi-Expressionist playlet “The Lost Girl”, complete with Ernst Toller-like skeletons wooing the girl.

The stage was not used again in a major way until the long closing dance sequences, where the Tura New Music quartet played so wonderfully as accompaniment to the dancers.

In what no doubt signified a celebration of rebirth, in tune with the Demeter and Persephone myth, the performers danced a mixture of folk-style dances with touches of the tarantella and a Scottish cèilidh. Earlier, performers had moved individually among the audience, either hugging the walls or breaking into brief intermittent dances. When dancing as a group, the varying levels of experience and expertise of the performers were made more obvious. 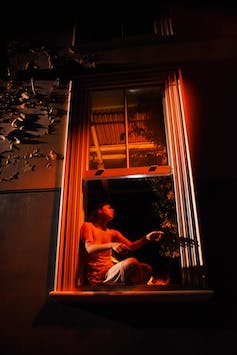 Sunset is performed in a former men’s home and hospital. Toni Wilkinson

Some of the dancers were excellent, particularly Natalie Allen as Demeter. But it is difficult to identify who in the performance were dancers and who were actors. The program is devoted to words and pictures on the Sunset precinct, notes from the directors, a poem from the character Alfred Ganz and pictures and bios of the major production and technical crew. The 12 performers get just their names — four lines in total.

That said, there are many fine things about this performance, such as evidence of some hard thinking on the best use of the space and how best to incorporate certain stories and omit others.

Many spectators appeared to have enjoyed it, notwithstanding the sauna-like conditions. And although there are workers in the world who must undergo far more blistering and extended working hours in extreme conditions, congratulations should be extended to the performers for their energy and commitment in spite of the oppressive heat.

Sunset is playing as part of the Perth Festival until February 17.