Australia is one of the world’s most highly urbanised nations – 90% of Australians live in cities and towns, with development concentrated along the coast. This poses a major threat to native wildlife such as the koala, which can easily fall victim to urban development as our cities grow. Huge infrastructure projects are planned for Australian cities in the coming few years.

The need to house more people – the Australian population is projected to increase to as much as 49.2 million by 2066 – is driving ever more urban development, much of it concentrated in our biggest cities on the east coast. This is bad news for the koala population, unless the species’ needs are considered as part of planning approvals and the creation of urban green spaces. The good news is that koalas can learn to live the “green city life” as long as they are provided with enough suitable gum trees in urban green spaces.

Indeed, our newly published research, which analysed stress levels in wild koalas according to their habitat, reveals that koalas are the most stressed in rural and rural-urban fringe zones. This appears to be due to factors such as large bushfires, heatwave events, dog attacks, vehicle collision and human-led reduction of prime eucalyptus habitats. Koalas living in urban landscapes are less stressed as long as the city includes suitable green habitats. 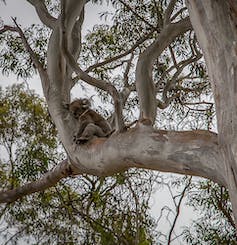 If there are suitable trees, koalas can learn to live among us – this one is next to a school in South Australia. Vince Brophy/Shutterstock

In other words, wild animals including the koala can adapt to co-exist with human populations. Their ability to do so depends on us giving them the space, time and freedom to make that adaptation. This means ensuring they can carry out, without undue pressures, the biological and physiological functions on which their survival depends.

Wildlife species that lack access to suitable green habitats in cities are at higher risk of death and local extinction. Having to move between fragmented patches of habitat increases the risks. Land clearing and habitat destruction for infrastructure projects and other urban development are compounding the major threats to koalas, such as being hit by vehicles or attacked by dogs.

Read more: Koalas are feeling the heat, and we need to make some tough choices to save our furry friends

How does human pressure cause stress in wildlife?

Animals cope with stressful situations in their lives through very basic life-history adjustments and ecological mechanisms. These include changes in physiology and behaviour in response to stresses in their environment.

We can help make the environment more suitable for wildlife species by ensuring their basic needs for food, water and shelter are met. If animals are deprived of any of these necessities, they will show signs of stress.

So by subjecting wildlife to extrinsic stressors such as habitat clearance, climate change and pollution we are making it even more difficult for these animals to manage stress in their daily lives.

Basically any unwanted change to an animal’s environment that prevents it from performing its basic life-history functions, such as foraging and social behaviour, will cause stress.

So what can be done?

The koalas are telling us it’s a major problem when urban design is not green enough. Innovative solutions are needed!

Cities can do much more for wildlife conservation. Creating safe green spaces for wildlife is critical. Not just koalas but other wildlife such as birds, small mammals, reptiles and frogs can benefit immensely from urban green spaces.

Even in suburbs with plenty of green space, problems still arise because urban planning typically designs this space around access for human recreation and not for the wildlife that was living there before the housing development moved in.

Urban planning should always incorporate the planning of green spaces that are safe for wildlife. Providing wildlife crossings is part of the solution. Another important element is educational programs to alert drivers to the need to look out for koalas.

Measures like this can minimise impacts on wildlife that faces the many challenges of adjusting to city life.