Kangaroos are the most visible of Australia’s unique animals, but despite their charm and national icon status, Australian writers perpetually kill them off.

A kangaroo appears struggling in a rabbit trap, doomed and dying in Charlotte Wood’s The Natural Way of Things, while Tim Winton has one killed on the road, dissected and fed to dogs in Breath. These are just two of many Australian authors who have represented the kangaroo as a victim.

Kangaroos were a creature of wonder for early European explorers such as Dampier and Banks, but it didn’t take long for their public image to descend to that of a pest. Early settlers considered them competition, nibbling all the best pasture quicker than their sheep and cows, and they soon took up arms against the bounding menace.

The wild kangaroo population of Australia is still commercially slaughtered for dog food. In New South Wales, landholders and volunteers can be simply licensed to kill them for reasons of damage control, and some parts of Western Australia have an open permit system for non-commercial shooting. On any given day, there are usually several being mashed into the blue metal of highways, surrounded by crows and in various states of decomposition.

The expendable nature of the kangaroo may be a widely held view in Australia, but it’s a bitter irony that the creature which defines us to the rest of the world is perpetually under siege, in life and in literature. 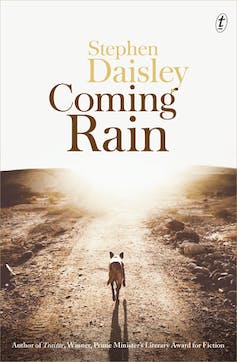 In Stephen Daisley’s 2016 novel Coming Rain, the author kills off a kangaroo with “a great thump” against the side of a truck, giving a gruesome description of the sweetening of the tail for stew.

The live joey almost has its head smashed against a tree but, owing to its “cuteness” it becomes a pet, wearing a straw hat. The stereotype of the cute joey is alive and well in children’s fiction too, but in adult fiction the kangaroo is dead.

In Tim Winton’s Breath, narrator Pikelet comes across surf guru, Sando, who has hit a kangaroo with his Kombi ute. Sando finishes it off with the jack handle from the car, pounded a couple of times into its head. His response to this act is very matter-of-fact: “This is what happens. And it isn’t lovely.”

Sando drags the “roadkill” into the tray of his ute and takes it home to butcher it. He is prepared for this, with a meat hook hanging from a tree, and he skins and guts the kangaroo. Pikelet observes this with some emotional discomfort, “shrinking from him a little” but accepts the flourbag of meat to take home to his parents who “wouldn’t eat roo meat in a million years”. He “hoiks” the meat into the bushes on the ride home.

Charlotte Wood considers the horror of roadkill in The Children, where Australian animals are killed by passing traffic and compared to contaminated “cushions”. Wood also kills a kangaroo (and a lot of rabbits) in The Natural Way of Things. Central character Yolanda snares a “large grey kangaroo” in a rabbit trap and finds it still alive:

Vainly, the kangaroo shifts and scuffles again. Then it lowers its head and lengthens its mighty neck, black eyes fixed on them, and lets out three long, hoarse snarls. Its snout fattens, nostrils flared.

Fearful of the sharp claws on its “delicate forefeet” they sit beside it, wondering how to set it free and instead bring it water and leave it to die slowly. 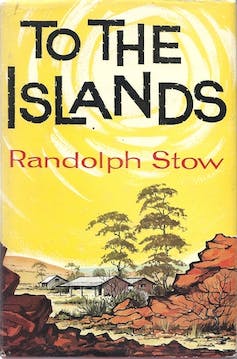 To the Islands by Randolph Stow (1958). Goodreads

The image of the kangaroo is linked to death through earlier works from Australian authors too. The iconic 1940 poem, Native-Born by Eve Langley presents a detailed account of a dead kangaroo, while Randolph Stow’s 1958 novel To the Islands features kangaroos and wallabies being shot and eaten.

Australian fiction is, so often, deeply entangled with nature. Anxiety around the bush, as described in D.H. Lawrence’s novel Kangaroo back in the 1920s, is a feature of settler Australian fiction, tied together with violence, trauma and a sense of the uncanny.

Docile and violent all at once, the watchful gaze and twitching ears of kangaroos are, perhaps, reminders of that uneasiness the settlers felt.

The fact that Australian literature seems intent on killing off this national icon is deeply disturbing – but it is also deeply ingrained.

Among these are Julia Leigh’s The Hunter, Sonya Hartnett’s Stripes of the Sidestep Wolf and Louis Nowra’s Into That Forest, as well as children’s fiction, drama, film, short fiction and poetry. These thylacines often meet with violent ends, but their aliveness in fiction is astounding compared to the kangaroo.

Contemporary Australia is sentimental about the thylacine as a strange creature lost because of “ignorance”. They are now a thing of wonder, destroyed by misguided colonial settlers who are long gone. But if they weren’t extinct, would we treat them any better? Would we protect them? Often that is the point writers are trying to make by invoking the extinct “tiger” in the first place.

Our relationship with kangaroos (and thylacines), both in fiction and in reality, is symptomatic of what Stow called our “bitter heritage”. So perhaps it is unsurprising, given the violence of colonisation, that it has had (and is still having) an impact on the way writers represent the Australian landscape and all who inhabit it.

This article is based on research published in a forthcoming article for Antipodes.