The crimson cloaks and white bonnets of Margaret Atwood’s dystopian feminist classic The Handmaid’s Tale have become a distinctive feature of Trump’s America. They’ve been worn by protestors outside state legislatures across the country, as elected officials attempt to enact laws limiting women’s reproductive rights.

Let’s face it, there are few costumes in classic or contemporary literature that will immediately tell everybody exactly why you’re there. But for the unfamiliar, the cloaks are invariably accompanied by posters with slogans like “The Handmaid’s Tale is not an instruction manual” and “Make Margaret Atwood fiction again”.

Atwood’s dystopia was undoubtedly on the minds of the hundreds of people – nearly all of them women – who filled the concert hall at the Sydney Opera House on Sunday to listen to her speak. So eager were they to hear that the tickets to the talk hosted by UNSW’s Centre for Ideas sold out in a record 45 minutes.

Read more: Why women are dressing up as Margaret Atwood's Handmaids

The Handmaid’s Tale describes a toxic world in which misogyny and environmental degradation has turned the US into a totalitarian theocracy. The fictional republic of Gilead has enforced a system of gender-based violence, enslaving the few women capable of bearing children to serve as “handmaidens” to the ruling class.

In Gilead, lesbians and “gender traitors” are hanged. Citizens are tracked, watched, and spied upon. Women are not permitted to read. Children are torn from the arms of their birth mothers. There are deadly skirmishes at the borders, as refugees attempt to flee. 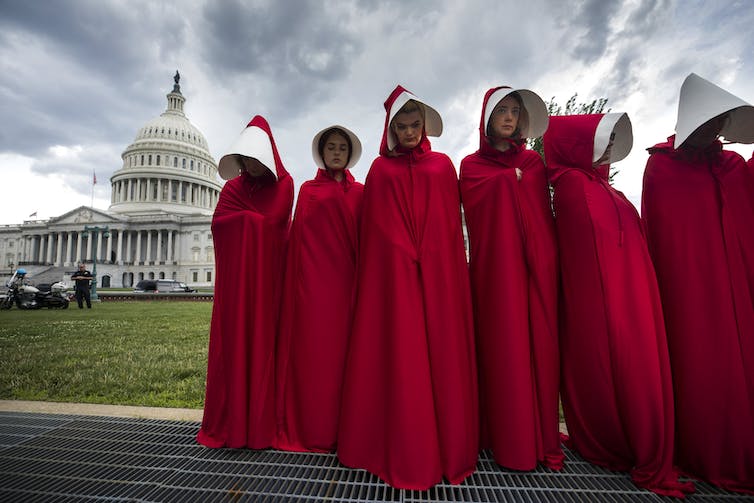 Activists in the US have donned the red cloaks imagined by Margaret Atwood in The Handmaid’s Tale. Jim Lo Scalzo/EPA/AAP

Little wonder so many critics have remarked on the unexpected parallels with the present – in a US in which a resurgence of threats to rollback women’s rights are accompanied by wider attacks on media freedom. News from the US border with Mexico – and from Australia’s detention centres – reads like something out of Atwood’s darkest imaginings.

It is tempting to stretch this looking-glass analogy to suggest the only substantive difference between The Handmaid’s Tale and our present moment is that environmental degradation is a pressing concern for the rulers of Gilead.

Atwood’s mind seldom runs in a straight line. It dances around what she wants to say – before skewering her point with a flash of dark humour. She recounted with affection some fashion advice from Dame Edna Everage about her hairstyle and – to the delight of her audience – actually sung. Then acknowledging the audience had possibly gathered to hear more about the “end of the human race”, said she would not delay them.

Control of women and children has been a feature of every repressive political regime on the planet and throughout history, Atwood told her audience. And oppression comes in many forms.

Writers write about the things that worry them. And Atwood’s work spans the major concerns of the century – climate change, species extinction, designer humans, the control and subjugation of women. Her work has been astonishingly adept at incorporating “each fresh hell” – as she calls them – as it arises.

And it was clear from the anxious laughter in the auditorium that the audience believed Gilead was already here – or at least, “there” in Trump’s America.

Atwood’s books paint a speculative or parallel reality. But she is careful to point out that they are also of their own historic moment. They contain nothing that has not already become part of what James Joyce once called the “nightmare of history” – no technology, no atrocity, “nothing goes on that has not already gone on”, she says.

She is also quick to insist that she is not a “prophet”. Atwood says – looking back on the Pollyanna decades of the 1990s – it could have gone the other way. She wished it had. We could have “all gone shopping” in Francis Fukuyama’s consumer capitalist utopia, she jokes. It would have been preferable.

Atwood is well known for her belief in the power of language to change things – something of an occupational hazard for writers. But she is also clear that words can obscure. They can damage. And they are often manipulated. “Who is going to decide how fake a piece of fake news is before it’s fake?”

One member of the audience claimed that she felt her whole life – from Ronald Reagan to Donald Trump – had been an experience of living through a series of “high literary dystopias”, lurching from atomic threat to species extinction.

Atwood had an answer for that, too. The solutions, says Atwood, will not come to you as novels.

They will also not be hers to find. She is – she claims – already an old lady who is arranging her own “environmentally friendly funeral”, without plastics.

Perhaps the reality is that in these dark times words are simply not enough. Words can be sharp instruments. They often seem to cut through a maelstrom to catch at the truth. But what we need is not just words, but also actions on a global scale. And so perhaps it’s time to don the cloaks and bonnets.