It might be blisteringly hot outside, but if you work in an office building, the chances are it’s always reassuringly cool (or cold, depending on your preference) once you walk inside.

In Australia and much of the rest of the world, it’s become standard practice for offices to be cooled or heated to a uniform 22℃. In many Australian offices, this temperature is even officially enshrined in commercial tenancy agreements.

And yet temperature is routinely one of the sore points of office politics – many office workers constantly feel too hot or cold at work. Of course, that might simply be because the air conditioning doesn’t work very well where you work. But it’s also reasonable to ask whether 22℃ is really such a magic number after all.

Our review of the available research, published recently in the journal Applied Energy, suggests not.

Read more: Shivering in summer? Sweating in winter? Your building is living a lie

The air conditioning industries certainly view 22℃ as the magic number, judging by guidelines published by the European and US industry peak bodies. Both claim that office workers’ cognitive performance at different temperatures follows an “inverted U” shaped curve, which peaks at 22℃. 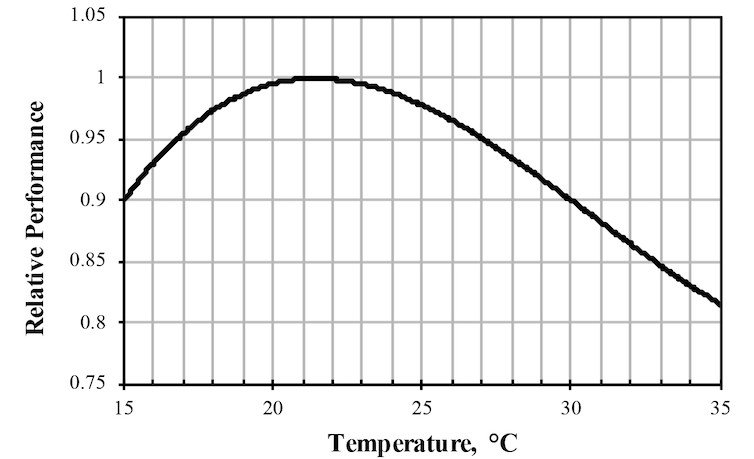 This explains why 22℃ has prevailed as the chosen figure all over the world, regardless of how much it might cost to heat or cool work spaces to that temperature in different climates. In the heat of an Australian summer this typically involves lots of cooling, but the view is that the prodigious output of comfortably cool workers more than justifies the electricity bill.

But are things really as simple as the graph above would have us believe? To answer that question, we critically reviewed almost 300 studies from a wide range of disciplines including physiology, psychology, ergonomics, neuroscience, sports science, human-technology interaction, and more.

We concluded that the relationship between temperature and performance is not an “inverted U” but rather an “extended U”. The evidence in fact suggests that human performance remains relatively stable across a broad range of acceptable temperatures, but then rapidly deteriorates once it gets any hotter or colder than this. The boundaries of the acceptable ranges depend on a lot of factors, such as the type of task you are doing, how demanding the task is, how adverse the temperature is, how skilled and motivated you are in doing your task, to name just a few. Our previous research found that workers perform just the same at 25℃, for instance. 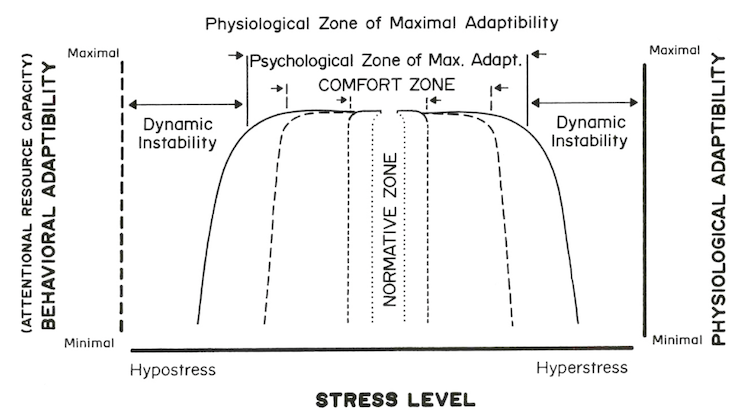 This is because humans are not just simple, passive machines. We can adapt in all sorts of ways to moderate levels of thermal stress. Common ways of adaptation include behavioural adjustment, physiological acclimatisation, psychological habituation, and probably most important of all, expectation adjustment.

So it turns out that our brains can still be at their sharpest even if it’s not exactly 22℃. But that’s not the only reason why the magic temperature is a myth. The existing rationale conflates “cognitive performance” with “office productivity”, when in reality these are two very different things.

Read more: Chill out. A slightly warmer office won't make it too hot to think

“Performance” is a person’s ability to produce “goal-directed activity”. In performance science, a job or task is often broken down into different performance components, such as memory, concentration, logical thinking, executive function and so on. “Productivity” is the extent to which an organisation is progressing towards its systemic goals, whether that be the amount of products they sell in a year, or the number of customers served within a specific period of time and how satisfied those customers are with the quality of service they received.

But there is no standard way to quantify office productivity. The common practice is to use performance measures as a proxy for overall productivity, but this is problematic for several reasons.

The first is that simulated performance tasks do not accurately represent the nature of real work carried out in actual workplaces. Standard cognitive tasks testing your memory, concentration and vigilance performance might not faithfully capture your ability to generate useful contribution towards achieving your company’s goals.

Second, productivity can also depend on many factors besides workers’ ability to perform. These might include workplace culture, organisational structure, job security and satisfaction, workload, management style, and personal factors such as injury, loss of sleep, life events, health and well-being, or financial stress. Distracted, disgruntled or worried workers aren’t going to be very productive, regardless of what the office temperature will be.

Read more: Five tips to get the most out of your workday

There are practical implications to this. Office managers might be wasting money chasing the “best” temperature for maximum productivity while ignoring other factors that have a much larger bearing on it.

An air-conditioning setpoint which is closer to the outdoor weather, aided by Personal Comfort Systems (like a desk fan, or contact cooling/heating device) may save energy bills while maintaining high levels of workplace satisfaction and mental performance.