When I heard about the new ABC TV soap The Heights (set in a fictional suburb of Perth), I was pretty excited. The promos suggested the show would include representation of working-class social housing residents. I tried to recall any Australian show (of any genre) that was set on a social housing estate and couldn’t think of one (happy to be proven wrong on this one).

I was a bit concerned – would this be a middle-class imagining of working-class life? But I was reassured by an article written by one of the show’s co-creators, Que Minh Luu. In her piece, she speaks of the need to diversify Australian television and bring the stories of minorities and marginalised communities to our screens. She mentions too that she has lived in social housing, which signalled to me that she understands the experiences of the characters.

The Heights is a soap opera – a television genre that is generally undervalued. Soaps don’t usually have the high production values of so-called “quality television”. They are made in bulk (The Heights already has 30 episodes), and have large ensemble casts. They have fast-moving storylines and require exposition and shortcuts to set the scene. But soaps also require actors to display enormous range, and the production process requires speed and agility, particularly when working with tight budgets.

There is some clunky dialogue in the first couple of episodes, as characters deliver expository lines to bring the viewer up to speed. There isn’t time for lengthy character development – we need to know pretty quickly who is who. Overall though, The Heights is a soap seeped in realism, and by the end of the first series (binge-watched on ABC iview), I was hooked.

There is a lot to love about this show, but particularly from a working-class perspective. The residents of Arcadia Heights are believable and the main thrust of the drama comes from their everyday lives, rather than ridiculous over-the top plots (no Bouncer’s Dream so far). Daily life for these characters is represented with nuance and a real understanding of the kinds of struggles and triumphs experienced by working-class people.

There are moments in the show that made me sigh with relief – at last! Yazeed Daher’s character Kam, for example, is a school student living with his older brother, his aunty, uncle and two cousins in a small apartment. Kam is keen to study, but there is no space at home. He is seen studying in the apartment block corridor.

Kam eventually finds a quiet place to study when his neighbour Iris (Carina Hoang), allows him to use the back room of her corner store. This moment demonstrates the obstacles that working-class students face.

Kam’s older brother, Ash (Phoenix Raei), is a builder’s labourer who falls in with a group of rich kids. He is initially enthralled by their excess – they can afford to party every night. They have beautiful clothes and lush homes. But Kam warns Ash that he’ll never fit in with the rich kids. And he is right. It becomes clear that Ash’s rich friends are intrigued by his cultural background (he is Iranian) and they exoticise him. They also display class fetish – he is their “bit of rough”.

Having been that “bit of rough” when I was young, I know how this works. Ash soon realises that unlike his new group, his family and his friends back in Arcadia Heights won’t treat him like a pet or a project.

The community in Arcadia Heights is tight. Everyone helps each other. People watching from a distance might find this part rather hard to believe, but those of us who grew up in social housing know that your neighbours have your back. Everyone pitches in when needed. You can rely on the community.

Iris helps Kam. Everyone helps Hazel (Fiona Press) when she takes on the full-time care of her grandchild. Uncle Max (Kelton Pell) helps his elderly and disabled neighbour Audrey (Davilia O'Connor) and the community all comes together to keep the local pub alive (the unofficial community centre).

The working-class characters are representative of social housing communities and are diverse in terms of cultural background, religion, sexuality, gender, ability. This diversity is the reality of working-class neighbourhoods – there is a tendency elsewhere to use “working class” as shorthand for “white”, but this is just not the case. 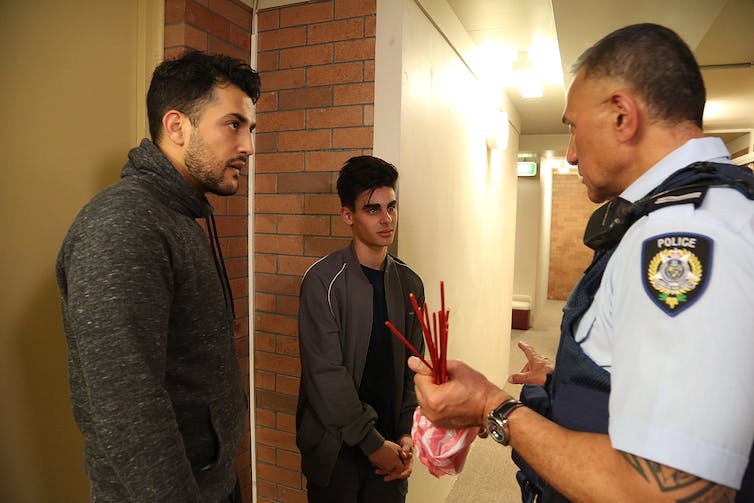 Phoenix Raei as Ash, Yazeed Daher as Kam and Eddie Stowers as Fetu in ABC’s The Heights. Bohdan Warchomij/ABC TV

This show demonstrates the intersections between class, race, gender, sexuality, ability and religion. Ash is uncomfortable when his rich friends press him to talk about his experiences as a refugee – they might be “woke” but they don’t understand his lived experience. High school student Sabine (Bridie McKim) moves into the neighbourhood with her mother Claudia (Roz Hammond), an emergency doctor. Sabine has previously lived in an affluent area and has a private school boyfriend, Dane (Nicholas Di Nardo).

Then she makes friends with Mich (Calen Tassone) who is a “class straddler”. His mother is a lawyer and his father is an ex-cop living in the social housing block. Mich is Indigenous and understands racism and discrimination and is also trying to understand his own identity as an Indigenous person. Sabine is disabled and has also experienced discrimination – they form a strong bond.

Social issues abound in the show – the storylines include gambling addiction, teenage sex, gentrification among others, but running through the writing is a great deal of humour and heart.

The Heights isn’t perfect – there is some stilted dialogue at times and some rather unbelievable sets. The house occupied by Renee (Saskia Hampele) and her tradie husband Mark (Dan Paris), is a TARDIS with an unfeasibly large interior. There are some stereotypical characters too – particularly Watto (Noel O'Neill), the drunken Irishman who lives for the pub, and Iris does sometimes border on an Asian stereotype with her “Tiger Parent” impulses.

But overall, the characters feel pretty real to me and there are some stand out performances from the younger cast members. Calen Tassone and Bridie McKim are fantastic and their banter is delivered with great timing.

The Heights has a lot to offer. I look forward to watching the next series and spending more time with the community in Arcadia Heights.