Captain Marvel flies into movie theatres from today, and apart from introducing a great new hero who combines the righteousness of Captain America and the humour of Thor: Ragnarok, it’s also a cultural reference bonanza for anyone who grew up as a child of the 1990s.

There are the obligatory references to the now-declining Blockbuster video store, a fantastic music soundtrack (Nirvana, Hole, TLC to name a few), and tech jokes galore.

Read more: Fingerprint and face scanners aren’t as secure as we think they are

We see the origin story of her character Carol Danvers/Captain Marvel, meet the Shield agents in the early days, and get set up with an interstellar conflict with some satisfying subversion of your typical expectations.

Blockbuster takes a beating, and perhaps a premonition of its future prospects. Marvel Studios.

So let’s go back to the ‘90s (like the movie’s website does) to some long-forgotten tech as well as some that has aged surprisingly well, and see how it all checks out, both scientifically and historically.

Don’t mess with this pilot.

Projecting holograms through a landline phone

Upon landing on Earth, Danvers raids a Radioshack shop and with a few deft modifications manages to set up a hologram communicator from a conventional wired phone.

The projection side of this feat would take some pretty impressive tweaking of 1990s technology (she appears to set everything up in a few minutes), but the bandwidth side of things can be analysed – that’s the amount of data needed for a hologram communication.

The bandwidth required for holograms varies widely, but figures of about 10Gbps are mentioned in the literature. There are also proposals to use 5G’s up to 10Gbps bandwidth to do holographic projections.

So if Danvers’ modifications have upped the bandwidth to modern day 5G standards, it’s feasible she could receive sufficient data to get a hologram up and running.

There are lots of nostalgic tech moments in the movie – an internet connection dropping out, and the whole crew waiting around for a computer to read data from a CD.

Although done for humorous reasons, this depiction is entirely accurate, as anyone who lived through the 1990s can attest.

CD read speeds varied from hundreds of kilobytes (kB) per second to 6 megabytes (MB) per second. Even with the fastest disc drives of the time, it could take many seconds to read even a moderate-sized file, and minutes to read an entire CD’s worth of data (about 700MB).

Compare that to today - we have USB drives with capacities up to 1 terabyte, and read speeds of more than 400 megabytes per second.

Fighters – not much has changed

In one of the secret hanger bases in the movie we get a shot of what looks remarkably like a Lockheed Martin F-22 Raptor fighter aircraft.

We get a sneak peak at an F-22 Raptor. Marvel Studios.

With the movie set in 1995, it’s somewhat plausible there could be a prototype F-22 at a secret base – the plane flew for the first time in 1997. Danvers is meanwhile seen to be flying F-16s at a normal aircraft base.

What’s also interesting is while on-board electronics and related technology have changed significantly, the core airframe tech has not advanced much over the past nearly quarter of a century – the F-22 is still considered to be one of the best aircraft around today.

To escape a fingerprint-tagged room, Nick Fury grabs a piece of plastic tape and runs it over where a staff member grabbed his ID card. He uses the fingerprint on the tape on the reader to unlock the door. 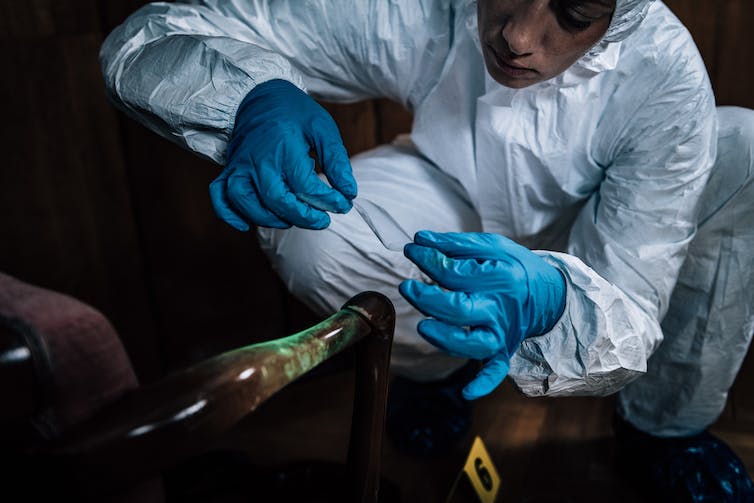 Grabbing fingerprints off a surface with tape can be done if the surface is prepared through a process called dusting. Dusting uses a fine powder to stick to the oily residue left by a fingerprint, which is then transferred to a piece of tape.

But Fury doesn’t appear to do any surface preparation, lifting the print directly off the ID card, which is pushing plausibility.

What do we know about non-carbon-based life?

All life on Earth is based on the element carbon. This is why when you burn either wood or meat, all you are left with is charcoal, which is mostly just pure carbon.

But when one of the alien Skrulls dies and the body examined, the doctor says it is definitely not carbon-based.

This is theoretically possible. We’ve known for a long time that life on other planets could also be based on other elements that are similar to carbon, for example silicon.

Even though carbon and silicon might look very different, chemically they are very similar regarding the kinds of chemical reactions that are needed to support life. This is because they are in the same column in the periodic table of elements.

But then the doctor says something strange, whatever the alien is made of, it’s not from the periodic table.

This is highly unlikely. All known matter in the universe exists on the periodic table, and the alien doesn’t seem to be made of any strange unknown substance like dark matter, just rubbery green flesh.

Verdict: Off the planet.

Nick Fury’s pager features quite prominently in this movie. Paging technology was all the rage back in the late 1980s and '90s.

With today’s mobile and smart phones, texting (SMS and MMS), a huge range of messaging apps and always-on connectivity everywhere, you might think pagers would have gone the way of dial-up internet. But that’s not quite so.

Pagers have a much longer range than phones, are harder to hack, don’t store conversation histories (important for privacy and security), and are more reliable during natural disasters.

They are still used by many emergency services and medical personnel who need to be contactable in extreme emergencies even when all other power and communications might be down.

She gets knocked down … and she gets up again. Marvel Studios.

The movie is a fun chance to be reminded of all the technology and culture of a quarter-century ago, and to think how much (and how little) has changed.

The movie’s depiction of the 1990s is generally pretty spot-on – a fun way for a younger audience to be introduced to what life was like before smartphones and ubiquitous high-speed internet. The pain of removable media, unreliable and slow internet connections, and having to go to the store to get a movie is all captured humorously on film. 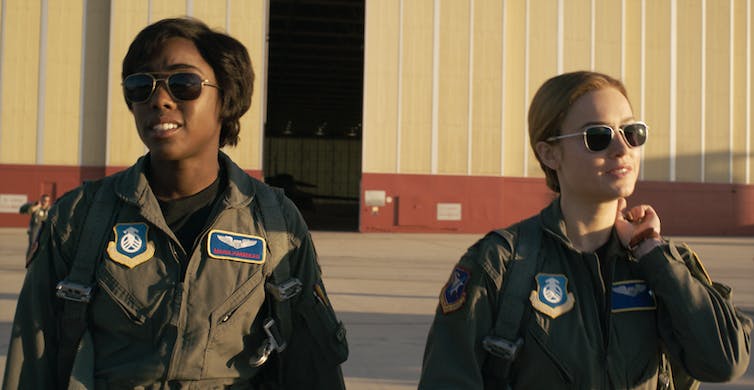