When I first came across the kauri pine (Agathis robusta), I certainly wasn’t impressed by their growth. Mixed among other species in a young rainforest plantation, they seemed destined to be left behind by the faster-growing trees (I did think they looked nice, though).

But today I know I judged the kauri unfairly. They can survive for millennia, so they don’t bother doing all their growing in their first couple of decades. But come back 20 years later, and that unassuming tree will be well on its way to being one of the giants of the forest.

Read more: Lord of the forest: New Zealand's most sacred tree is under threat from disease, but response is slow 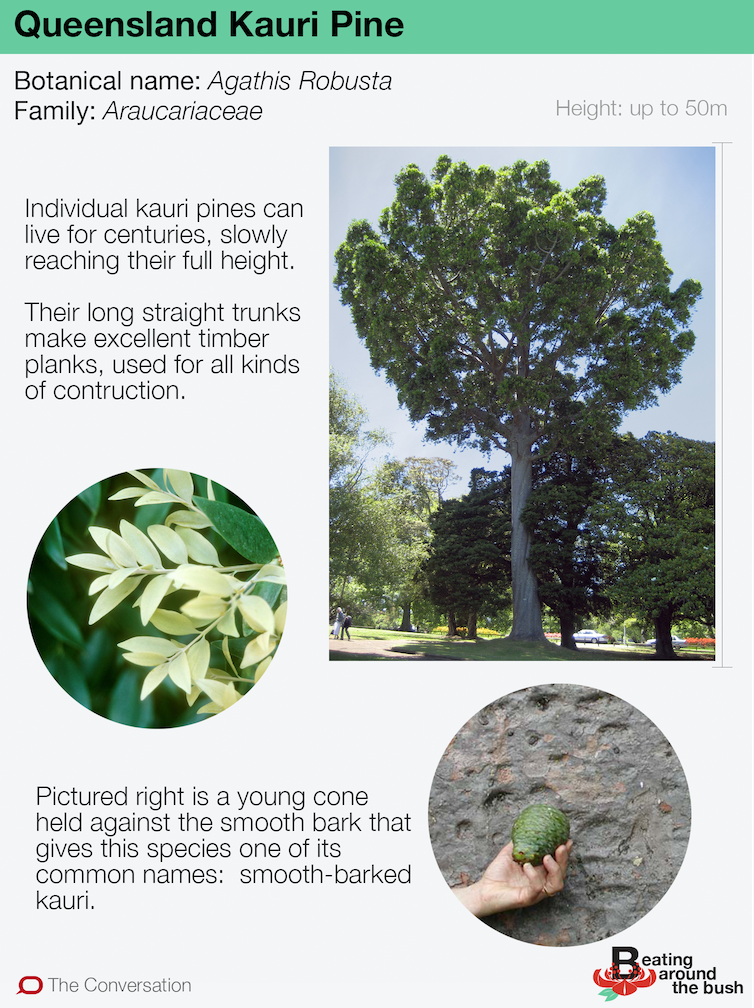 The Conversation Impressive by any measure By any yardstick, kauri pines are truly unique and impressive. If time is our measure, then the kauri family, Agathis, has endured over epochs, with fossils found in Australia from the early to mid-Jurassic period. Having withstood the rise and fall of the dinosaurs and the evolution and diversification of our flora, 17 species of living fossil trees in the Agathis family remain. Agathis is an iconic genus of large, ecologically important, and economically valuable conifers that now range over lowland to upper montane rainforests from New Zealand to Sumatra. So, if we judge a plant’s success in terms of its geographical spread or its ability to adapt to a range of conditions, the Kauri family is once again outstanding. If we measure a plant by appearances, then the tall, robust and handsome Queensland kauri pine remains an impressive – albeit little-known – plant. Reaching up to 50 metres, it emerges above rainforest margins in tropical and subtropical eastern Australia. Its straight, round trunk can grow to 3m in diameter and a combination of smooth mottled bark, coppery new growth and dark green canopy make this tree a world-class ornamental. In parks and gardens across Australia, Kauri pine cuts a fine figure, growing to enormous sizes, even in southern regions. Read more: Mountain ash has a regal presence: the tallest flowering plant in the world Our Australian kauri pine, once common in the dry rainforests of Queensland, has become a victim of its own success. A heavy reliance on the highly regarded wood during the earliest stages of the colonial timber industry has left only a few old trees standing, mostly in remote areas or forest reserves. In my role as a research scientist, I have tracked down the kauri’s cousins in the Pacific regions, where the giant pines can now only be found on tops of mountains on remote islands. In New Zealand, the giant kauri that once covered large areas are in danger from the soil-based fungus Phytophora. Germaine Greer, in her 2014 book White Beech, describes visiting a massive kauri tree on the North Island over 50m tall and 13.5m in diameter that is in danger of succumbing to the fungus after a life measured in millennia. A useful tree According to the Gymnosperm Database, Queensland kauri was first reported by Europeans in 1842 by Andrew Petrie, who found it growing in the Mary River country, and reported that the native peoples made their nets from its inner bark. A fine, even texture set this timber apart from the more common Hoop pine. In the South Pacific, the cousins of the Australian kauri have a strong cultural significance and features in the Maori creation myth. The wood from the Southern Kauri (Agathis australis) was used for water craft, and the gum used in traditional tattoos (moko). Enthusiastic attempts by the Queensland Forest Service to grow the kauri in plantations were devastated by large stick insects. As a result, kauris are now only grown at a very small scale in mixed species rainforest timber plantations, which is where I stumbled upon them. Read more: Comic explainer: forest giants house thousands of animals (so why do we keep cutting them down?) In about 2002, during my PhD study of young (8-15 years old) rainforest plantations, I first measured kauri as a small tree amongst the well-regarded cabinet timber species of mahoganies and white beech. At first glance, the appeal for me of this Jurassic fossil was merely aesthetic. They were not very impressive in terms of early growth in the plantations; so I focused my attention on the rapid, early growing species. However, having ignored the kauri for about 10 years, I was astonished (upon return to my old study sites) at how rapidly the kauris had progressed. Not only is this species one of the best performers in terms of diameter growth, but it also has excellent form. It produces straight stems free of large branches that indicates excellent quality logs, for those growers who value wood quality. My regard for the kauri is now much more than aesthetic; or even as quirky relics from deep time. These trees are showing themselves to be extremely resilient and competitive, under challenging climatic conditions, across a very wide range of sites. They have the capacity to withstand severe storms as well as longer term stresses, such as drought. I now know that, given the kauri pine can live for many centuries, it is not advisable to measure their value according to the first decade or so of growth, but rather their productivity and resilience across their whole lifespan. Read more: Where the old things are: Australia's most ancient trees