Since the illegal demolition of the historic Corkman Irish Pub in Melbourne in 2016, debate has raged about the best way forward for this historic place. The state planning minister is pursuing an order, via the Victorian Administrative Appeals Tribunal, for the two-storey pub to be rebuilt. This final legal case is set down to be heard in June 2019.

The site owners were last month fined a record A$1.325 million, plus costs, after pleading guilty to the illegal demolition. If they are also ordered to rebuild, to what extent can this restore the Corkman’s heritage? How do we achieve our collective desire for justice and the best outcome for this prominent site on the doorstep of the University of Melbourne and the CBD?

Click below for an interactive view of the Corkman site in Carlton:

Courtesy of Digital Heritage Australia (with historic photograph from State Library of Victoria).

The Corkman is not an isolated case. Local pubs have become ripe for redevelopment to the frustration of communities from Melbourne to London. After illegal demolitions in London, authorities demanded the rebuilding of Kilburn’s Carlton Tavern and The Carlton in Stepney Green.

People in the heritage field have been dealing with sites that have been unexpectedly destroyed for as long as conservation has been a social concern. Urban environments are living historic palimpsests, made up of physical remnants and collective memories, both equally important and always changing.

More than a building

The Corkman Irish Pub, or Carlton Inn, survived almost 160 years. Completed in 1856 during the gold rush, it was a two-storey brick and bluestone building covered with a white render. Successive owners have altered its interiors and exteriors many times.

For generations of students and local residents, the Corkman was a cherished gathering place. It was one of a shrinking number of live music venues in Melbourne and larger cities more generally.

Instead of waiting for planning authorities to consider their 12-storey apartment proposal, “cowboy developers” Stefce Kutlesovski and Raman Shaqiri sent the bulldozers to work on the weekend of October 15-16 2016. In addition to the A$1.325 million penalty from last month, they had previously received a fine of A$540,000, plus costs, for the illegal dumping of asbestos from the site.

Following this brazen act, politicians and the public called for the Corkman to be rebuilt. Kutlesovski and Shaqiri even agreed at first to return the Corkman to its earlier state but swiftly backtracked, hence the forthcoming hearing in June. 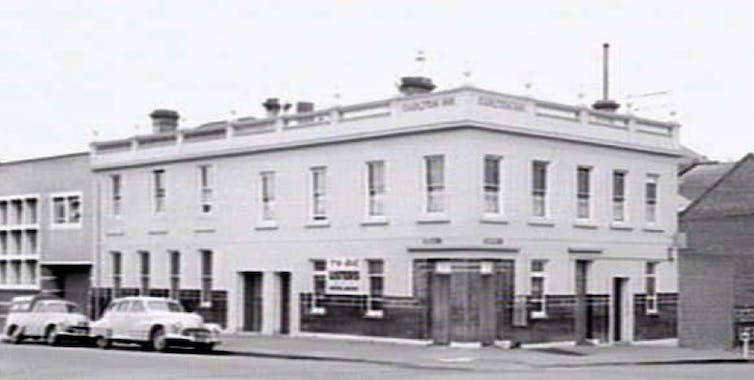 The Corkman Pub/Carlton Inn in 1957, a century after it was built. State Library of Victoria

The pub as heritage place

Pubs are imagined to be welcoming to everybody irrespective of class or identity. Of medieval origin, the pub – a public house, a meeting place, licensed to serve alcohol – is more than the building that houses it. In The Australian Pub, historians Diane Kirkby, Tanja Luckins and Chris McConville write:

From the earliest days of colonisation, pubs have reflected, absorbed and created Australia’s changing ethnic and gender population. 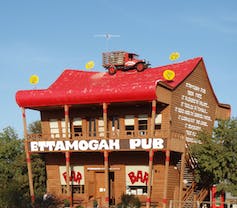 ‘The original Ettamogah Pub, based on a cartoonist’s celebration of the Australian pub, at Table Top, Albury, NSW. VirtualSteve/Wikimedia, CC BY-SA

The affective heritage value of pubs can be gleaned from the strong emotional outpouring their destruction triggers. A London newspaper headline for Stepney Green’s Carlton pub read: “Anger as 165-year-old East End pub that survived the Blitz is flattened by a developer”. Melbourne writer Jeff Sparrow noted the “widespread horror” at the “trashing [of] the [Corkman] pub”.

Irrespective of their protected status, sites that are treasured by the community can emerge as significant heritage places. Yet, despite their importance to neighbourhoods and communities as a kind of public space, pubs can struggle to gain heritage protection. This is because they tend to be architecturally unremarkable, too ordinary to surpass regulatory thresholds that tend to prioritise aesthetic over social values.

The Corkman was loosely identified in a local heritage overlay, basically because of its age. Had the developer waited for a planning permit, a likely result would have been the retention of the historic facade with a tower set back behind it.

To rebuild or not to rebuild?

The desire to have pubs rebuilt to right a wrong and return the place to the community is understandable. Debates about rebuilding destroyed buildings have occurred since antiquity. In the modern era, reconstruction resurfaced as a conservation approach in the late 17th century, but became especially prominent in the immediate postwar period.

This was the era of the “facsimile”, the technical term for reconstruction in heritage practice. Following the destruction wrought by aerial bombing during the second world war, cities such as Nuremberg and Warsaw rebuilt their historic old towns to an earlier form. The notable example outside Europe was Quebec City, which recreated its historic town in the late 1950s as an expression of Quebecois nationalism.

In each case, the construction of these physical environments was about drawing from the past to reinvigorate a sense of local and national pride. Despite some scattered cases, the field of heritage practice nowadays avoids facsimile. It’s perceived as risking the creation of an inauthentic Disneyfied version of what once existed.

At the Corkman, it is unlikely that sufficient documentation exists to build an accurate facsimile. The slightly lower threshold for reconstruction stipulated by the Australian Burra Charter, for the management of places of cultural heritage significance, is also unlikely to be achieved here.

And to what moment in time should the place be rebuilt? The 1856 version of the Corkman was not what stood on the site in 2016. Sticky carpets, hoppy smells and lingering echoes of conversation are what makes pubs special.

Physically recreating a demolished heritage place might give us comfort but will never undo the damage done nor bring the place back to life. That rebuilding is not currently the heritage norm, however, does not mean it should be entirely ruled out. And to authorise developer profit at this site would be to reward the illegal act and could motivate copycats.

If the local community wants their pub rebuilt, a reconstruction may well be an appropriate response. A possible solution is to implement heritage-inspired planning controls based on the demolished building. Then residents and students could be empowered to direct the future direction, design and use of the Corkman site.