How to review a play whose relationship with matters of fact is so serious and politically culpable it overwhelms the critical distinctions that might normally be used to judge it?

Where is Stanislavski’s “magic if” (if I were a refugee locked up for six years by the Australian government …)? What are the “given circumstances” (near-drowning at sea, a sun-beaten island at the end of the earth)? Or the “inciting incident” (political oppression, military destruction, despair on an epic scale)?

We might ask is the narrative balanced? Does the piece make appropriate use of contemporary staging techniques in portraying, say, how a 23-year old refugee set himself on fire, or a group of teenage youths sewed their lips together?

Is it well-shaped dramaturgically? Is the flow of events satisfying to an audience expecting a good night out at the theatre? Or is it too much for those affronted by the horror, the inhumanity, the endless hell of it all? How will Australians in particular cope, given that we are the ones responsible for building that hell and setting its cycle of torment in motion? 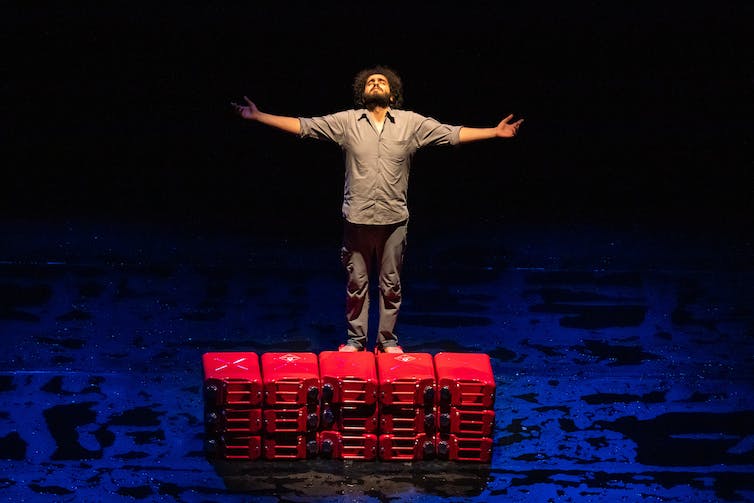 Manus, as the title will suggest to most, but especially Australian audiences, is a drama presenting the stories of eight refugees from Iran who sailed to this country in 2013, just after the passing of the Coalition government’s Operation Sovereign Borders legislation.

Apropos the new zero-tolerance approach to marine-arriving asylum seekers, they and hundreds of others were mandatorily detained at Manus or Nauru Regional Processing Centres for five years or more. There they faced limited resettlement options, and an explicit commitment to never allow them entry into Australia, regardless of whether they were found to be “genuine” refugees or not.

The first half hour of this 90-minute show by Iranian company Verbatim Theatre Group explores the background of the characters – who are not characters, of course, but men and women with names, faces, families and fates, just like you and me – and the reasons they chose to leave their home.

These are as various as you’d expect, and fall into the category of the credible. Their journey takes them via Indonesia, into the Arafura and Timor seas, where they hit storms and rough waters, their flimsy vessel breaks apart, and they nearly drown.

Just in abbreviated form, delivered with the slight means at the disposal of a small company from Tehran – two dozen red petrol cans, some projections and a rain effect – this section of the narrative is harrowing.

It’s a ghastly journey even when undertaken with adequate food, water and equipment, which are frequently absent. Rescue comes from a British naval vessel and the Iranians are asked where they want to go. They say Australia. 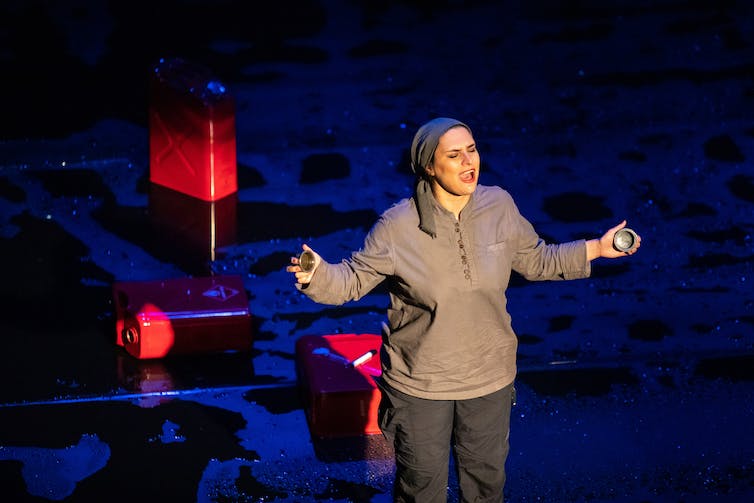 The first part of the show is dedicated to the life stories of the people portrayed in the play. James Elsby

There are sharply divided opinions in this country about what director Nazanin Sahamizadeh describes in the program note as:

a world in which every three seconds one person is forced to flee home … to seek safety, security or simply a better life in peace and freedom. Tragedy in our time shows its ugly face when the borders are closed rather than open to these women, men, girls and boys.

It is not hard to imagine her view being strongly contested: the argument put that opening our borders only encourages people-smugglers, for example, thus more dangerous maritime crossings, and thus more deaths at sea. It is also possible to question the social impact of large-scale migration (though Australia’s in-take is not especially large) and a global order where, in the words of academic Alexander Betts “refugees and displacement are likely to become a defining issue of the 21st century”.

But beyond the general debate we find, in legal parlance, a bright-line. The last two-thirds of Manus narrate how the eight Iranian detainees fared in their tiny island prisons, and the neglect, abuse, humiliation, indifference, and, to our ever-lasting shame, outright violence and cruelty they were subject to.

In this, the main body of the play, we hear the voices and accounts of those who saw the 2014 riots on the island close-up, because, unlike the Australian politicians glibly sure of their judgements later, they actually witnessed them.

The deaths, injuries and hunger-strikes that followed were peaks in a sine wave of misery that ground down the asylum seekers through repeated acts of petty tyranny. The play describes this through the voices of the actors: food delivered late or not at all; latrines limited in number and broken; electricity cut off in the middle of the night; telephone calls restricted.

On and on and on it goes: a stream of organisational meanness as deliberate, ingenious and grim as any that can be found in Dante’s Inferno.

It is one thing to refuse entry to people who claim asylum in Australia on the grounds their entry is illegal. It is another to treat them in the way we have, subjecting them to prolonged and aggravated incarceration for no criminal offence, dragging Australia’s reputation into the slime, where it will no doubt remain for some time to come, and deservedly so. 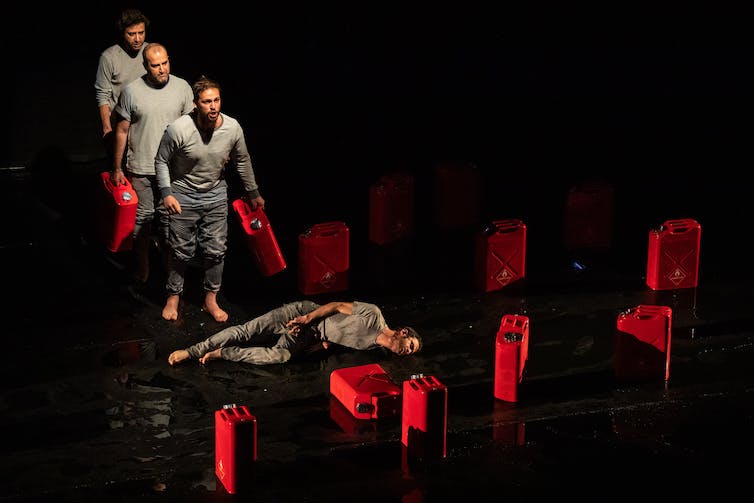 Manus is not a perfect show. It is hard to imagine how such a panorama of human misery could be condensed into 90 minutes of stage action.

Within the verbatim theatre model there is a tension between emotional authenticity and documentary accuracy. Delivered entirely in Persian, with English surtitles, Manus leans toward the first, with the result that sometimes details blur and it is difficult to judge the scale and effects of a given event. News footage, projected onto the bodies of the performers themselves, is used to boost atmosphere rather than to communicate precise chronology.

But this does nothing to rob the drama of its impact in the Australian context. In fact, the opposite: the show’s imperfections only point up the evil perpetrations we have let slither by us, as an electorate, like a venomous snake. Theatre has a trick of banging-out home truths in ways that can’t be dodged, even with our nation’s studied mastery of the toad-arts of moral evasion.

I left the venue feeling numbed, drained and profoundly confronted. What was I doing while all of this was happening? While these refugees, normal people, neither better nor worse than myself, were having their lives excoriated by devils, large and small, in my name? What were we all, as supposedly good Australians, thinking?

Not even God can change the past, the Spanish say. We have infinite time ahead of us to answer such questions, and contemplate the void they have opened up in our national soul.