Picture the scene – we’re in ancient times and a group of cave people are gathered around a fire telling stories about their day (there’s evidence of storytelling by way of cave art over 30,000 years ago).

They have no Wi-Fi. There are no fancy gaming consoles or immersive media (or even popcorn for that matter) and yet they are almost certainly crafting tales and enthralling each other.

Thankfully we’re all vastly more evolved now because we have creature comforts and flashy technology – like PlayStations and virtual reality (VR) at our fingertips. Quaint notions of narrative and story shouldn’t matter anymore, right? Not so fast.

Read more: Virtual reality has added a new dimension to theme park rides — so what's next for thrill-seekers?

My recent research suggests that even with advanced immersive technology, people still hunger to be told stories. 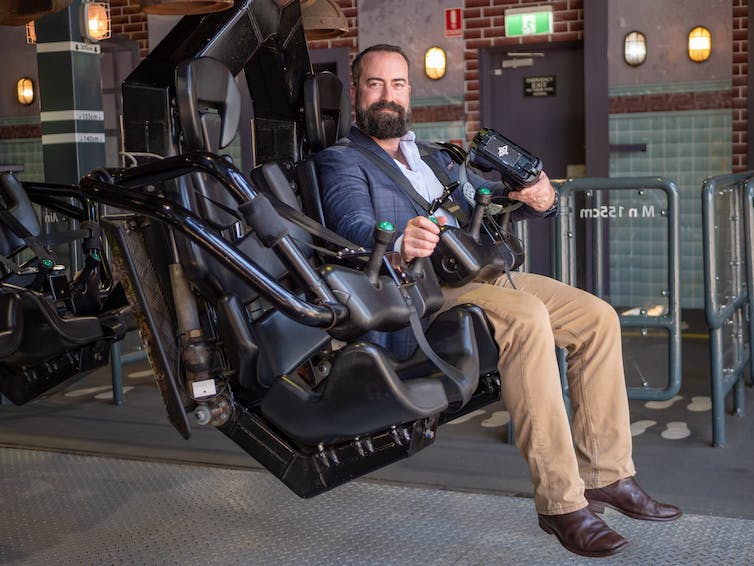 The author on a VR rollercoaster, ready to perhaps not be told a story. @PhotoByJarrod

I’m researching what consumers want from VR entertainment experiences. I’ve collected original data from multiple VR participants all around the world by way of interviewing them with series of fixed questions as they stepped off VR roller coasters, VR simulators, VR drop rides, VR water slides and VR walkthrough experiences.

These rides and experiences represent some of the most advanced examples of immersive entertainment on the planet. And yet once we analysed the data for trends and themes, what came through loud and clear from participants may have resonated just as well with our cave people: we want story.

Said one participant who had just stepped off a VR roller-coaster experience (that’s a real roller coaster, with a VR headset that shows graphics and animations of something completely different to the physical ride):

I just think it’s flying around and stuff, I don’t think there’s a story. If there is … I don’t know what it is.

Other responses ranged from simple confusion (“I just don’t know what was going on”) and “It felt a little bit like Super Mario: jump and run”, to one consumer who was clearly crying out for even a crumb of narrative:

I mean, you have dwarves and regular human people and then you have a dragon in a cave, but then you have a bat that’s flying around … like, what’s the backstory to the whole situation?

Another participant appears to give a nod to technology at the beginning of their response, with a familiar pivot at the end:

I think they went a lot in depth with a lot more of the graphics. I think they could have put more into the storyline itself.

While a chirpy minority appeared less concerned about the lack of obvious story, they (perhaps inadvertently) underscored the importance of story anyway by admitting it was so essential to their experience that they were forced to make up their own:

A lot of people say you need to have a backstory and all that, but I kind of enjoyed the idea that you don’t really know what’s going on, kind of having to make up your own little story for it.

Virtual reality is still seen as flashy technology, so it’s no surprise vendors and theme parks promote their VR experiences technology-first and seem to ignore the lure of “narrative transportation” – a highly desirable state in entertainment experiences where consumers lose track of the real world by being lost in a story.

This enables immersion, which in VR enables escapism, which means we get that much-desired magical moment of forgetting the world and all its problems, just for a moment.

Research suggests that game developers (note that games are often put in the same basket as VR entertainment experiences) are benefiting specifically from pursuing rich storytelling.

The not-at-all-shabby US$131 million success of the recent PlayStation 4 game God of War in its first month of release was attributed to a focus on narrative.

Technology is obviously critical for a successful VR experience (high resolution, spatial audio, low latency – meaning when you look around the digital world responds exactly as you would expect without lagging – just for starters) but it seems participants handsomely reward technology when it is paired with storytelling.

Read more: Careful how you treat today's AI: it might take revenge in the future

Also, most VR entertainment experiences are short, which does not necessarily allow for in-depth stories to be developed. Additionally, the often wild forces at work on the more aggressive physical rides utilising VR can mean subtle story detail may be difficult to introduce to a narrative, at least in the active ride portion (when you’re being flung around upside down at high speeds, you might not be searching for nuance).

But it seems the current offerings are over-reliant on technology alone as a way to attract participants to these experiences, when it may be that promoting more traditional narratives – a simple story – may be a more effective technique.

While the world has changed enormously since the ancient times, we haven’t, and there’s something sweet, and very human, about that.