Why do bats sleep upside down? - Questions from Year 5 at Brandon Park Primary School, Victoria. The class has been studying animal adaptation.

Evolution allows animals to adapt to their environments by favouring those who have an advantage that helps them survive. If they survive long enough to have babies they pass that advantage onto their children through their genes. That process is what we call adaptation.

Animals have adapted to live in different environments and eat different foods, so they don’t have to compete with each other.

Around 530 million years ago, all animals lived in the ocean. They were rapidly evolving and adapting to live in different places to minimise competition.

Some animals have evolved to live at great depths, like the anglerfish. It has a bioluminescent light it uses to attract prey in the dark water. Other sea creatures evolved amazing camouflage skills, which helps them stay safe from predators.

Eventually, sea animals developed adaptations that allowed them to live on land. More adaptations occurred over millions of years, leading to the amazing and complex range of animals we have today.

Sometimes, two different animals will evolve to have a similar adaptation, even when they are not closely related. Flight is an excellent example.

Here’s a video where two researchers explain some of the key differences between bird flight and bat flight.

Flight has evolved four times: in insects, bats, birds and pterosaurs (the flying creatures from the time of dinosaurs).

These four groups don’t have a common ancestor who could fly. In fact, they all evolved to fly from ancestors who could not. This is what we call “convergent evolution”.

However, birds and bats have some major differences. Bats still have the five digits, or fingers, that their mammalian ancestors had (mammalian means they are mammals, which are animals who have a mammary gland, that produces milk to feed their babies; they also typically have hair or fur).

Birds, however, have lost the digits that their ancestors had. The bones in a bird wing have fused. 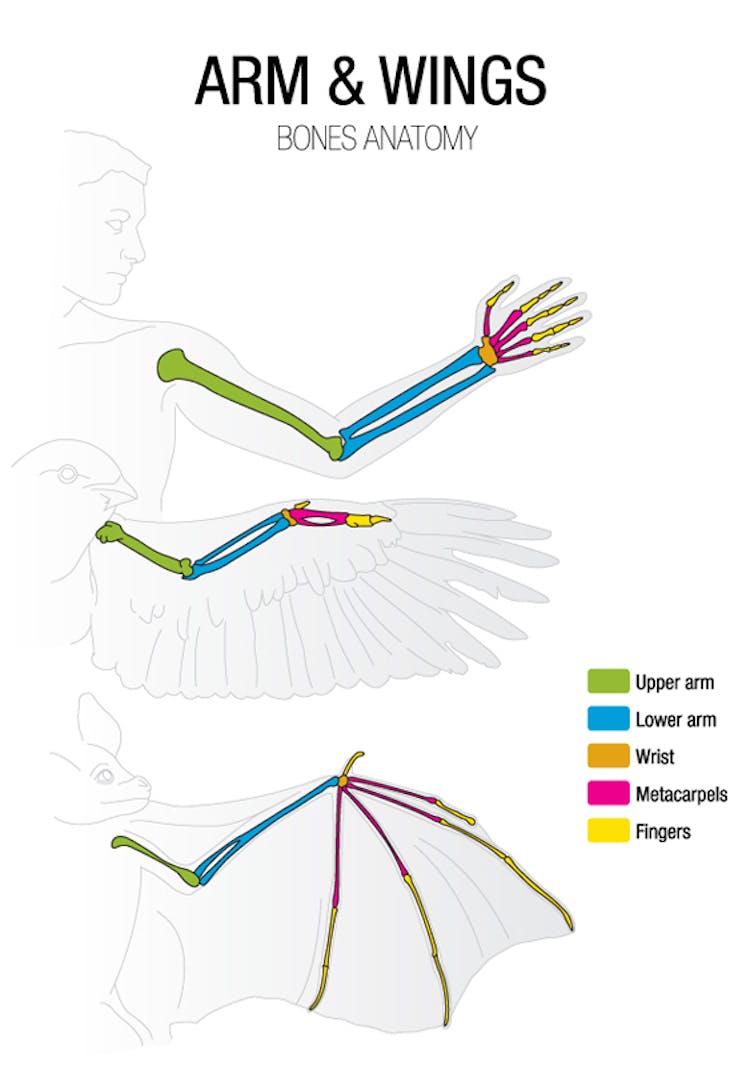 Bats still have the five digits, or fingers, that their mammalian ancestors had. Birds, however, have lost the digits that their ancestors possessed. The bones in a bird wing have fused. Shutterstock

Hunt, but don’t be hunted

The bat ancestor (or pre-bat) lived in trees, hunting small insects as they moved along the bark. Since it’s much harder to run up a tree chasing an insect, the pre-bat would wait, facing downwards for prey to come up the tree trunk. That way they could easily run downwards if they saw something tasty.

They used their hands and mouth to grab the prey and hung from their back legs. This led to an adaptation in their claws which allowed their tendons to lock into place when they hang. That’s why bats can hang upside down without using muscles, and barely any energy. Gravity does all of the work for them.

Since it uses the least amount of energy, it’s the best way for a bat to sleep. But on the trunk of a tree, they are visible to predators who hunt during the day while bats are sleeping. Some bats moved to sleep under the horizontal branches, which provided protection.

As with all evolution, the adaptations that help a species to survive is the one that will persist. Most bats now sleep in protected areas and only a few species still sleep on tree trunks.

To save energy while flying, you want to make yourself as light as possible. Birds have hollow processes in their bones but bats do not. One way in which bats evolved to save weight was to make their back leg bones shorter and thinner.

The drop and fly theory

When you watch a bird take off from the ground, you will notice they need a run-up. In order to get off the ground, flying animals needs to achieve what scientists call “lift” to overcome gravity. Many big birds, and bats, do not have strong enough wing muscles to generate the lift required to take off from a standing position (like a helicopter can).

Bats cannot run so it would be almost impossible for them to take off from the ground. A major advantage to hanging upside down is that bats do not need to generate lift to begin flight. They just drop out of their bed, open their wings and off they go.

A BBC Earth Unplugged video explaining why bats like to hang out upside down.

Did you know there are seven species of bats that do not sleep upside down? They sleep in curled-up leaves! Six of these species live in Central and South America, while the other one lives only in Madagascar.

Read more: Curious Kids: Why do humans not have fur like chimpanzees and gorillas?