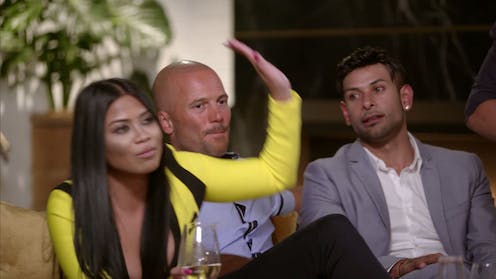 Now in its sixth season, the Nine Network’s wildly successful Married At First Sight chronicles the adventures of 12 couples as they navigate the highs and lows of married life. The premise of the show is relatively simple: each contestant (MAFS reportedly received 10,000 applications) is evaluated by “relationship experts” and matched with a partner. Each pair ties the knot without ever having met and – poof! — they’re married at first sight!

The show shoehorns a lifetime of matrimonial issues into a few dozen episodes. Over the course of the season, viewers witness the daily ups-and-downs of marriage and cohabitation, and ultimately we learn the difficulty of matchmaking. MAFS’s couples fight, they cheat and – spoiler alert – most separate (divorce?) within a matter of weeks.

But if MAFS is merely reality TV, then why is it so popular? Could we be addicted to gratuitous programming? In part yes — reality TV has ruled the roost since 2001, when Big Brother arrived on our shores and averaged 1.4 million viewers each night. But could it also be that MAFS is reality? In a world of Tinder dates and lunchtime botox, maybe MAFS is more of a reality check than a social experiment.

Below are five reasons that Married at First Sight reflects the demographic realities of modern Australia.

1) Australians increasingly cohabit prior to marriage. One of MAFS’s more earnest attributes is the awkwardness of sharing a bed with someone you barely know. Research by the Australian Institute of Family Studies shows that 81% of Australians co-habit prior to marriage, up from 16% in 1975. The proportion aged 15 years and over living in de facto relationships has doubled in the past 20 years, from 5% in 1996 to 10% in 2016.

The Australian Study of Sex and Relationships found that Australian men and women reported having had an average of 18 and 8 sexual partners, respectively. From the first episode of MAFS onward, contestant Matthew Bennett is teased by his male co-stars about his lack of (any) sexual experience, suggesting this is far from the norm among the cohort.

2) Marriage has been delayed. A common refrain uttered by MAFS contestants is that they have sacrificed love for a career. For Cameron, that was professional cricket; for Jules, that was running a successful hair and beauty business.

3) Despite this, marriage remains a strong institution. The 1911 Australian Census revealed that 46.0% of the population aged 15 and over was married. Divorce was virtually non-existent and was made more difficult by archaic laws. The proportions increased steadily until the marriage boom of the mid-20th century.

Today’s figure of 48.1% is remarkably close to what it was a century ago, but down from 53.2% at the 1996 census. The 2017 referendum on same-sex marriage demonstrates that a majority of Australians (61.6%) now support a broad and inclusive definition of marriage.

4) Modern Australia is urban. Despite the “Outback” image presented to the rest of world, Australia is approximately 90% urbanised (depending on how we define a “city”). Consistent with national figures, the MAFS crew are overwhelmingly urban.

Eight contestants (33%) live in Sydney and eight more in Brisbane, Melbourne or Perth. Regional contestants from Gympie, Newcastle and Townsville are almost perfectly aligned with national data showing that Australia’s urban populations are divided between major cities (72%) and “inner regional” (18%) parts of the country.

5) Modern Australians are multicultural. In addition to their geographic distribution, MAFS contestants have a range of ethnic and national backgrounds. Of this season’s contestants, nine (38%) self-report a discernible non-Australian identity (either them or their parents).

This reflects the waves of migrants that have rendered Australian cities some of the most ethnically diverse on Earth. Ines fled civil war in Bosnia, while Filipino, Greek, Italian, Thai and other national identities are proudly represented by respective contestants.

Thus, in contrast to many of the previous reality shows depicting the Ocker Australian (e.g. Farmer Wants a Wife), the diversity of MAFS is significantly more true to life. According to the most recent census data, 49% of Australians were born overseas or have at least one parent that was.

So, as we have shown, reality TV may not be too far from reality after all – at least in terms of demography.