The terror attacks at the Al Noor and Linwood Mosques in Christchurch send a message to Muslims: there is no safe space from Islamophobia. The attacks have made it more difficult for Muslims in Western cities to find places where they feel safe.

Our research on the geography of Islamophobia identifies the negative impacts of anti-Muslim attacks on how Muslims use and access certain public spaces. From Sydney to San Francisco, young Muslims expect Islamophobic attacks or abuse in certain places. This limits their use of those parts of the city.

This is a direct result of rising Islamophobia in public discourse. The expansion of Islamophobic attitudes affects people around the world. This creeping blight is a national calamity that undermines social cohesion in Western countries.

Sense of belonging under siege

Our ability to access, engage with and use city space is a major indicator of belonging. Some public spaces welcome certain groups. Other spaces exclude. This makes some individuals feel “in or out of place”.

In other parts of the world, political leaders have questioned whether women should be allowed to wear a burqa or hijab. When Muslim men and women do choose to wear Muslim clothing in public, they report being verbally and physically attacked for doing so.

There are other tragic cases of Islamophobic attacks in public places and mosques. For example, in June 2017 during the holy month of Ramadan, 17-year-old Nabra Hassanen had been walking along a road to evening prayers at her local mosque in Virginia, USA, when she was beaten to death. Earlier that year, a Canadian man shot and killed six worshippers at a Quebec City mosque.

These hate crimes against Muslims have made it difficult for Muslims to feel safe. Most concerning is that “Muslim spaces” such as mosques are also under attack and can no longer guarantee respite from Islamophobia. 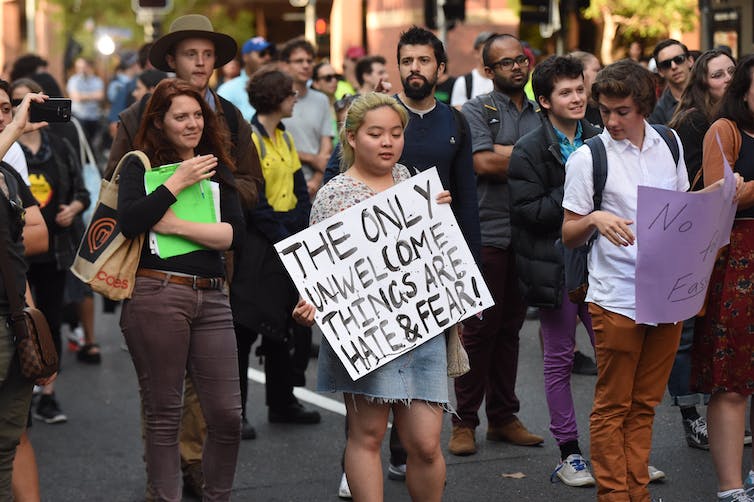 Protesters against a 2015 anti-Islamic rally at Paramatta mosque try to counter the damage Islamophobia does to Muslims’ sense of belonging. Dean Lewins/AAP

Our surveys of Muslims in the San Francisco Bay area found Muslims expect cases of discrimination in public places. These include parks, beaches and streets. Public transport and airports are also sites of Islamophobia. This restricts the ability of Muslims to travel safely.

A report on the geography of anti-Muslim hatred in the UK found a 200% increase in Islamophobic incidents in 2015. Public areas and transport networks were the most common sites for these attacks.

Muslims, and visibly Muslim individuals in particular, respond to Islamophobic attacks by avoiding certain public places, travelling in groups and being constantly vigilant against attack.

In Sydney, young Muslims labelled the region of Sutherland as the most Islamophobic part of their city. Their perception of Sutherland was related directly to the Cronulla riots in 2005, when over 5,000 people gathered to exclude and remove any “Arab” or “Muslim” people from Cronulla beach.

The young Muslims we interviewed ten years after the riots stressed that they still felt excluded from that suburban space. They continue to avoid that beach area. This highlights how acts of racist violence restrict Muslim access to city spaces.

The perspectives offered by young Muslims in the interviews included:

Post-Cronulla riots those that would have gone to Cronulla beach I find, just based on observation and talking to people, that they will drive a little bit further and go toward a beach in the national park rather than go to Cronulla Beach because, I think, it’s just – I know it’s been so long, but […] it’s also very raw because it was a direct attack […] directed at a community and a certain faith. – Female, 25, Merrylands, NSW

Cronulla, even if it was a nice beach, just again based on what happened years ago, so for me that’s really ingrained in my mind. – Female, 29, Strathfield, NSW

Some of my Arab friends didn’t like to go to other beaches other than like the whole La Perouse, Brighton circuit […] That’s just because they didn’t want any trouble and stuff like that […] after the Cronulla riots. – Male, 25, Greenacre, NSW

Read more: Friday essay: a response to the Cronulla riots, ten years on

Where can Muslims feel safe?

Our surveys of Muslims in San Francisco and Sydney highlight that Muslims feel the greatest sense of respite, acceptance and belonging in Muslim neighbourhoods. When asked to map their perceptions of Islamophobia, they associated regions with higher Muslim populations as being less Islamophobic. They felt their Muslim identity was most accepted in these regions where they felt the greatest sense of belonging.

On the flipside, many areas with smaller Muslim populations were associated with being the most Islamophobic and less accepting of Muslim identities. Feelings of acceptance and safety in “Muslim geographies” are positive and necessary to the urban experience of belonging.

Attacks against mosques in Christchurch have significantly threatened this sense of safety of Muslims in Western cities. The shooting of worshippers intensifies the general negative effects of Islamophobia around the world.

A number of steps can be taken to improve the safety and belonging of Muslims in Western cities. These include: