In the run-up to May’s federal election, the federal Labor party has unveiled an ambitious plan to reduce Australia’s transport emissions.

The key targets are to have electric vehicles make up 50% of new car sales by 2030 and to introduce regulatory fuel emissions standards.

As Australia currently lacks federal policies to reduce or reverse petrol emissions, these goals are laudable. But it’s unclear how Labor will actually achieve them, especially if they remain reluctant to impose costs and tariffs on high-emitting cars – one of the most successful international strategies.

The transport sector is the nation’s second-fastest growing source of carbon dioxide emissions, which continue to rise and offset the emissions reductions in the electricity sector.

These goals are all necessary steps to help Labor meet the ultimate economy-wide target of reducing CO₂ emissions by 45% on 2005 levels by 2030. 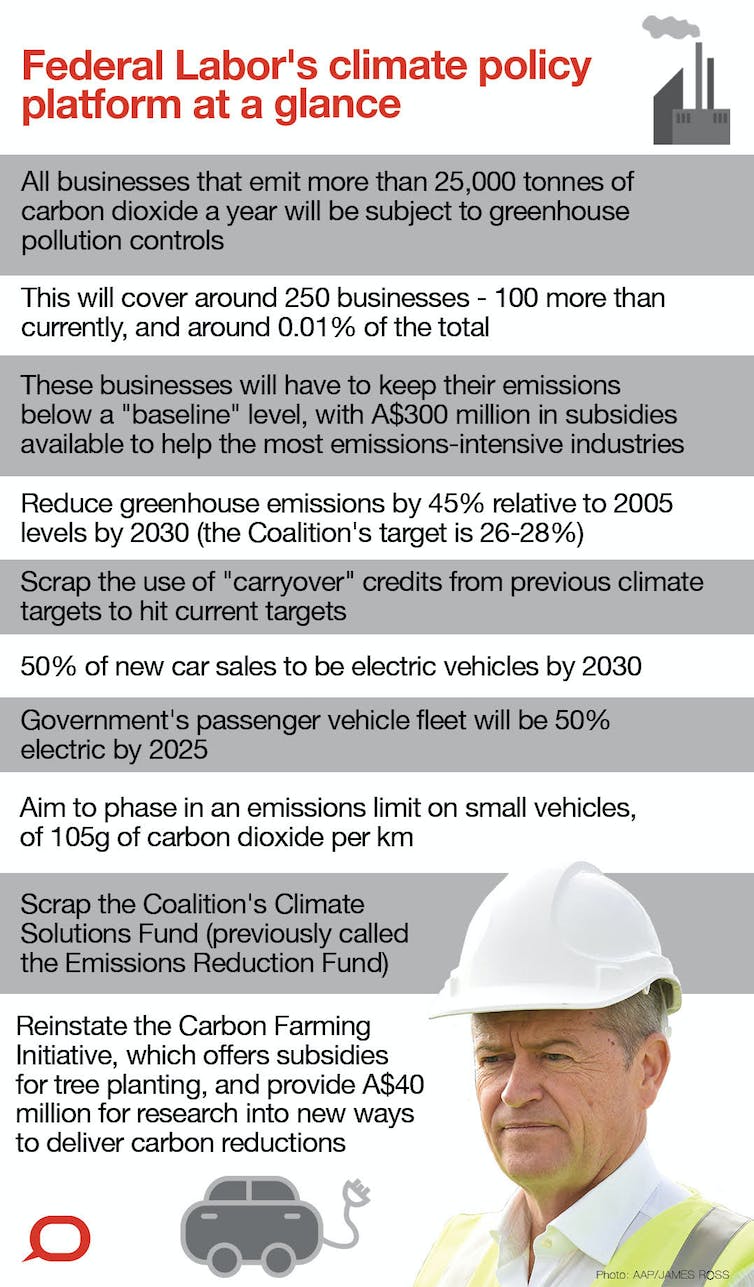 The Conversation A long way to go Australia is a global standout in its failure to regulate emissions standards; we are the only OECD country with no minimum fuel standard. More than 80% of the global vehicle market has adopted fuel standards. The 2017 average emissions from new passenger and light commercial vehicles was 181.7g/km, a reduction of just 0.3% from the previous year. Australians only bought 2,424 electric vehicles in 2017, 0.2% of new cars sold. Introducing these new regulations quickly is a priority because it takes years for them to actually work their way through the market to the new vehicle fleet. Contrast Australia’s position with the European Union, which introduced fuel emission standards in 2009: their average for passenger vehicles is 118g/km, 45% less than Australia’s. This average will reduce further to 95g/km by 2021. Read more: Australia has stalled on car efficiency Expect pushback on average emission standards Shorten announced that Labor will consult on the timeline on phasing in standards of 105g/km for light vehicles, that is consistent with the Climate Change Authority’s advice to put this standard in place by 2025. This would bring Australia into line with the United States. Reaching this ambitious target requires around 42% reduction from 2017 level of 181.7g/km, or a 76.7g/km reduction in the average emissions intensity from light vehicles from 2020 to 2025. These goals would require firm regulation, which is very likely to see significant political push-back. In 2017 industry groups protested vociferously when a Ministerial Forum proposed to phase in the same regulatory emission standard from 2020, arguing that Australia is different to Europe and the US and similar rules won’t work here. It was claimed that penalties imposed on any supplier or manufacturer for not meeting the standard was like a “carbon tax” that would be passed onto the consumer. What works We can look to the rest of the world for lessons on what works when it comes to reducing transport emissions. The reality is it does come down to price, which governments can influence through a mix of financial carrots and sticks. Take the example of Norway, where purely electric cars make up 31.2% of new vehicles sold in 2018. If hybrids are included, sales increase to 49.1% of the market. Read more: Australians will not buy electric cars without better incentives The government’s target is for all new cars sold by 2025 to be zero emission cars, without any loss in revenue. To meet this goal, the Norwegian government offers exemptions from 25% VAT, stamp duty and the annual road tax. Norway has also created non-financial incentives for plug-in electric vehicles (including plug-in hybrids) including access to bus lanes, free use of toll roads and ferries and free municipal parking. On the other hand, petrol vehicles face higher stamp duties and import taxes based on a combination of weight, CO₂ and NOx emissions, and 25% VAT. When all of these incentives are added up – plus stringent CO₂ emission standards –Norway removed the price difference between electric and hybrid cars and traditional petrol vehicles and stopped the “dumping” of low-priced high-emitting vehicles on their market. It’s this price difference that ultimately decides what consumers will buy. Australia’s bestselling new car in 2016-17, the Toyota Corolla, has a Redbook Guide price of A$23,490, while the lowest-emitting car of a similar size, the BMW i3 REX, came in at A$74,100. The Corolla emits an average of 149g of CO₂ per km, compared with the BMX’s 13g. Read more: Sustainable shopping: with the right tools, you can find an eco-friendly car Labor is already certain to face strong resistance from industry groups, and this uphill battle will be complicated by the fact that stamp duty and annual registration are regulated by state and territory governments. If Labor wants to change Australia’s deeply entrenched market of high-emitting vehicles, they’ve got an awfully long road ahead.