For seven years, Melbourne boasted the title of “world’s most liveable city”, but recently lost the top spot to Vienna. The Economist Intelligence Unit awards the title each year when it publishes its Global Liveability Index. This ranks 140 cities for their urban quality of life based on assessments of stability, health care, culture and environment, education and infrastructure.

The rankings have their limitations, which have been criticised. To regain top spot, or indeed just to become a better place for the people who actually live in the city, perhaps Melbourne and other cities like it should go beyond the traditional indicators. This means considering other factors that affect not only liveability but also health and sustainability.

Read more: The world's 'most liveable city' title isn't a measure of the things most of us actually care about

Health and mobility are linked

Urban and transport planning has a large impact on sustainability, liveability and health. A recent study in Barcelona estimated 3,000 people die prematurely each year (20% of total mortality) because of urban and transport planning-related environmental and lifestyle factors. The largest contributor to premature death was lack of physical activity, followed by air pollution, noise, heat island effects and lack of green space. 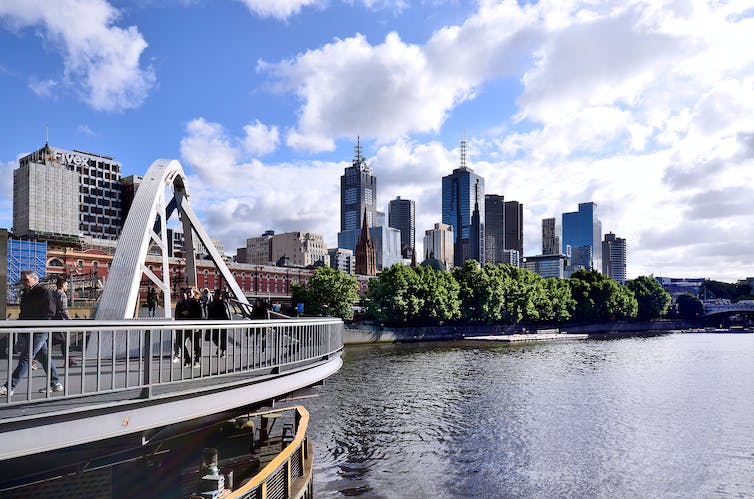 A city that makes walking more convenient has many benefits for health and well-being. fritz16/Shutterstock

Melbourne is a sprawling city with not enough public and active transport. The result is a high level of car dependency (85% of trips are by car).

There are direct links between urban and transport planning, level of environmental exposures and physical activity and health and well-being. For example, infrastructure for cars results in higher car use and increases in air pollution, noise, CO2 emissions, stress, mental health problems and heat island effects, and lack of physical activity, green space and social contacts.

On the other hand, an investment in infrastructure for active transport such as cycling and walking leads to reductions in air pollution, noise, CO2 emissions, stress, mental health problems and heat island effects, and increases in physical activity, social contacts and possibly green space.

Climate change is a real threat and motorised traffic is one of the large contributors to CO2 emissions. And motorised traffic takes up a lot of public space in a city – up to 60%-70%. This space could be used in much better ways to make a more pleasant living environment. 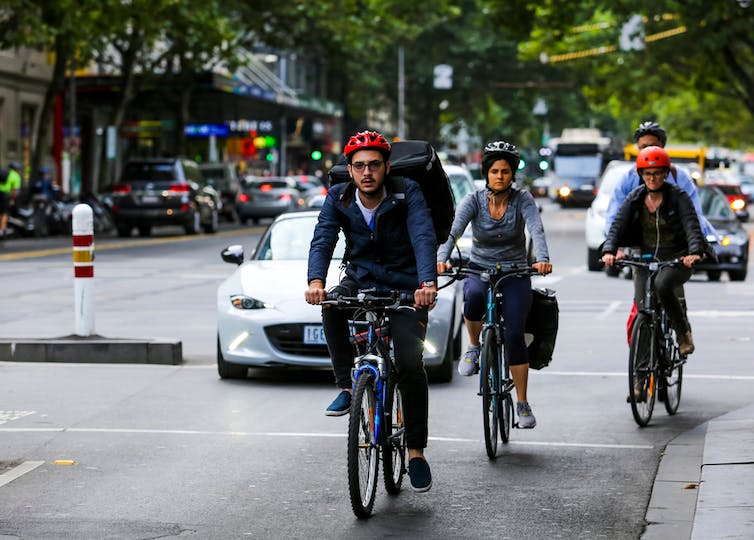 A shift from cars to cycling could free up a lot of road and parking space in the city. Abdul Razak Latif/Shutterstock

Read more: Freeing up the huge areas set aside for parking can transform our cities

So how do we make Melbourne not only more liveable, but also more sustainable and healthy? We urgently need to reduce urban sprawl and car dependency, increase public space for people, increase public and active transport, and increase green space.

There are no magic bullets to achieve these goals. It requires a package of measures, strong political leadership and large investments.

The following are seven strategies, with examples of specific measures:

1. Put people at the centre of public spaces

3. Reduce motorised traffic and move towards public and active transport

6. Control pollution emissions from other sources

We can make our cities more sustainable, liveable and healthy, but it requires a large joint effort and can only be achieved with a strong vision and commitment. However, the results can be highly rewarding.