Despite some reprieve in the 2019 federal budget, the ABC is still in dire financial straits. More job losses and a reduction in services remain on the agenda.

But this funding doesn’t address the broadcaster’s need for more stability in its operational funding.

In July, the ABC will start to feel the full impact of a three-year, A$83.8 million indexation freeze on its funding, which was contained in the 2018 budget. So devastating is the size of that cut – and the ones prior to that – that ABC managers are almost completely focused on money, undermining their capacity to be strategic about the future.

There is no provision in the 2019 budget to restore the funding lost over the past six years and certainly no boost to cater for the dynamic and changing media environment.

Audiences who value what the ABC does now – and what it needs to be doing to support Australian democracy into the future – should take a closer look at the numbers, the way the money has been allocated and the impact of that.

Read more: ABC inquiry finds board knew of trouble between Milne and Guthrie, but did nothing

Accumulated losses to ABC are staggering

To illustrate the need for more secure operational funding for the ABC, one of the authors of this article, Michael Ward, conducted research on just how much the broadcaster stands to lose in the aggregate over the course of an eight-year period. Ward used a number of public financial sources to build the table below, including ABC portfolio budget statements and ABC answers to Senate Questions on Notice 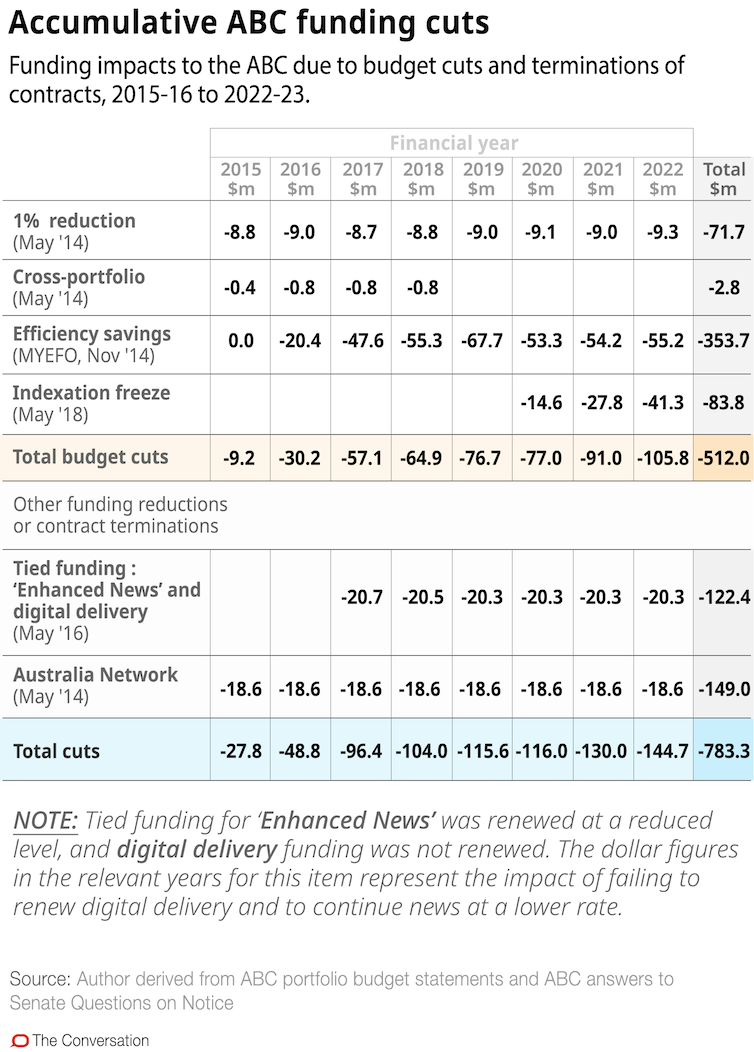 One of the difficulties in looking at budgets is the way forward estimates work. As the figures in the table show, the past six budgets have included measures to reduce, remove or freeze (indexation) ABC funding, without adding any new funding initiatives. This has resulted in an accumulated reduction in available funding of A$393 million over a five-year period, starting from May 2014. According to current budget forecasts, this also means the ABC stands to lose A$783 million in funding by 2022, unless steps are taken to remedy the situation. The Coalition government and others would argue, however, the ABC actually received a reprieve in this year’s budget with committed funding for “enhanced news gathering” because it treats as “new” the renewal of tied fixed-term funding as it expires. The “enhanced news gathering” and digital delivery funding was first enacted by the former Labor government in 2013. Although “enhanced news gathering” funding has been renewed twice by the Coalition government since then, including in this year’s budget, the amount allocated for the program was slashed in 2016. So, while it appears that the current budget announcement is good news for the ABC, the reality is, it is simply a continuation of what should be seen as core business. Read more: ABC budget cuts will hit media innovation One way governments of all ilks have tried to control the ABC - and to win voters over - is by providing tied funding to specific programs like this. One of the earliest examples of tied funding was a National Interest Initiative by the Howard government in 2001, and later the Rudd government’s Children’s Channel and Drama Funding Initiative of 2009. These were seen as core to the ABC’s work, and were eventually made part of the ABC’s ongoing budget. The problem, of course, is that voters do not understand the impact of the cessation of limited-term, tied funding programs. We argue that tied funding is also contrary to the principles of independent public broadcasting because it effectively forces the broadcaster to prioritise its activities and programs at the current government’s whim. It also inhibits longer-term effective financial planning by the ABC. Tied funding used by all parties If elected, the ALP has committed to restore the A$83.8 million indexation freeze for the ABC included in last year’s budget. It has also promised an additional A$15 million for specific projects to restore short wave radio to the Northern Territory and add more local and regional content, emergency broadcasting and a news literacy program aimed at combating misinformation campaigns online. Labor has also pledged “funding stability for the ABC over the next budget cycle”, though this has not come with a guaranteed boost in funding. These commitments are important, but the freeze is just the tip of a funding iceberg that the ABC has been dealing with for the past six years. The continuation of a tied funding approach doesn’t address the underlying budget problem. More needs to be done. Read more: Cut here: reshaping the ABC The Journalism Education and Research Association of Australia, a group that represents journalism academics in Australia, drew on Ward’s research at the recent Senate hearing into allegations of political interference of the ABC to call for more secure operational funding for the broadcaster. JERAA argued that the ABC has been cowed by repeated parliamentary inquiries, funding cuts and efficiency reviews. These have had a severe impact on the broadcaster’s ability to perform its important role for the Australian people, which includes production of excellent public affairs reporting, local programming, international news, children’s programming and services on a range of current and emerging platforms. Tied funding stops the ABC from meeting the core components of its legislated obligations, particularly digital content delivery, where the cost of success – increased take up of services – carries an extra financial burden, unlike analogue broadcasting. Unless the ABC has ongoing stability of funding and ideally an increase that allows it to keep innovating, it won’t be able to maintain relevance in this fast-moving, globalised media world, nor will it be able to continue as a watchdog on people in power, particularly governments.