The Wall Street Journal carried the announcement of Australia’s May 18 poll with the rather cruel headline “Australia to Pick Its Next Leader—With an Election”.

It was a sharp reminder (if anyone needed one) of how appalling federal politics has been – and what it looks like to outsiders, as well as to the local voters who will soon register their judgement.

This election is Bill Shorten’s to lose, if you take the long trend of opinion polls, and what the public predict when asked who’ll win.

But the campaign over the coming weeks can be crucial, and Scott Morrison is a ferocious and desperate fighter.

Read more: Morrison visits Governor-General for a May 18 election

Bill Shorten starts in a strong position. The Coalition has been a shambles through much of the parliamentary term. The Liberals executed a prime minister; a Nationals leader executed himself. The government has few significant achievements except same-sex marriage, to which it was dragged.

Labor has a coherent narrative and an extensive suite of well-developed policies.

But those policies – including on negative gearing, franking credits, and climate change – are Labor’s weakness too. They leave it wide open to the scaremongering that will be relentless (and often dishonest, if the electric car debate is a guide).

Government and opposition begin this contest with nearly equal numbers. After the redistribution, the Coalition has a notional 73 House of Representative seats and Labor 72, with six crossbenchers; 76 seats are required to win government in the new 151-member house.

The closeness of the numbers means the Coalition (in minority government when the term ended) must win seats to survive.

It has hopes in a scattered handful of Labor seats – including Herbert in Queensland and Lindsay in NSW.

The Liberals may win back Malcolm Turnbull’s old seat of Wentworth - which independent Kerryn Phelps took in the byelection - if former Liberal voters have got over their fury at the coup and look to a potential future high-flyer in Liberal candidate Dave Sharma.

Another possible Coalition gain could be Indi, where independent Cathy McGowan’s bid to pass her mantle to an independent successor may be too ambitious.

But against the government’s few prospects, its outlook in Victoria is bleak and it has many marginals in Queensland. Several Liberal seats are at risk in Western Australia. The Nationals seat of Cowper could go to a recycled independent, former MP Rob Oakeshott.

If the Coalition pulled this election out of the fire, its victory would surely be narrow, even a hung parliament, not a prospect many voters would relish.

He has drawn on John Howard 2004 “trust” pitch, asking “who do you trust to deliver that strong economy which your essential services rely on?”

But how will Morrison rate compared with Shorten on the empathy meter? His reply, when asked on Thursday about Labor’s “fairness” theme, that “under a Liberal Nationals government, we will always be backing in those Australians who are looking to make a contribution not take one” was jarring (and reminiscent of Joe Hockey’s lifters and leaners).

Shorten is tapping into a rich vein of grievances, over flat wages and the high cost of living. His mantras are fairness, a united team, and the contrast between looking to the future “versus being stuck in the past”. He has made Labor’s pitch on health, its traditional strength, very personal for people with his big-ticket promise to slash costs for cancer sufferers.

Compared with 2016 this will be a short campaign, 38 days to 56 days. And it will be rougher, as the Coalition runs heavily negative and reaches for every weapon. Unlike Turnbull in 2016, Morrison will not be wearing gloves.

On the other side, Labor will benefit from the freneticism of GetUp, which has many government MPs in its sights and a target of making a million phone calls. And the unions have money and manpower.

Turnbull campaigned badly, and the government was lucky to survive last election. The former prime minister’s hyped language - “innovation”, “agile”, “ideas boom”, “age of excitement” - was attuned to the future but a turn off in many parts of the country.

Morrison has to be wary of falling into the opposite trap – sounding old-fashioned, out of sync with public opinion and the rush of technology.

The scepticism of sections of the Coalition about renewables has damaged the government. The misrepresentation and demonisation of Labor’s target of having electric cars form 50% of new car sales by 2030 is likely to be counterproductive. “Bill Shorten wants to end the weekend […] where you’ve got Australians who love being out there in their four wheel drives,” Morrison said last Sunday. After the airing of past quotes from ministers praising electric cars (and maybe some focus groups) the attacks shifted gear slightly.

Australians love renewables and believe electric cars are the way of the future – that it’s just a matter of when they become cheap enough. The Coalition will get nowhere by appearing to stand in the way of progress.

Both sides are struggling with the imperatives of geography in this election. Adani epitomises the dilemma.

This week the Morrison government signed off on another approval stage of the proposed coal mine – a good message to central and north Queensland, a bad one to Victorian Liberal seats where climate change resonates. Likewise, Labor has its own problem dancing along the Adani tightrope. The controversial project will stalk the campaign.

In announcing the May 18 date on Thursday, Morrison spoke in his prime ministerial courtyard. A few hours later Shorten made his opening statement from the home “of an everyday Australian family” in the Melbourne suburb of Mitcham.

Courtyard versus backyard – the competing images at the election’s kickoff. A beginning that will be long forgotten when the campaign reaches its exhausted end after five weeks of trench warfare. 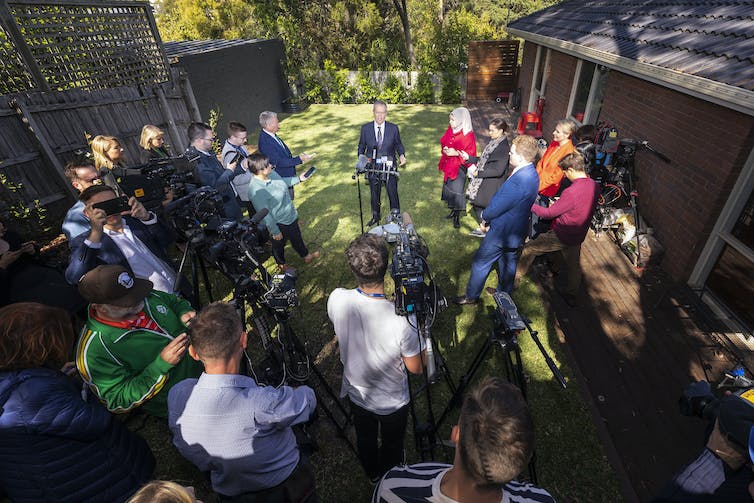 Bill Shorten at his first press conference of the campaign in the backyard of a family home in Melbourne. Daniel Pocket/AAP