This article is part of our series on homeschooling in Australia. The series answers common questions including why homeschooling is on the rise and whether homeschooled children have enough opportunities for socialisation.

Australia has mirrored these trends. Registered homeschooled student numbers nearly doubled from around 10,000 students in 2011 to nearly 20,000 in 2018.

People thinking about homeschooling, or already doing it, may wonder if their child will miss out on the quality of education provided by trained teachers at school. But the available research shows outcomes of homeschooled students are either the same, or better, than those of their traditionally educated peers.

Australian state and territory education departments require parents or guardians to register to homeschool their children. But some people don’t do this, which is one of several known challenges to conducting research on the homeschooled population. This issue alone makes it virtually impossible to obtain random samples.

There are other issues too, such as the different types of homeschooling approaches used (such as structured or unstructured schooling). Despite this, some robust research on outcomes has been conducted.

International research suggests homeschooled students’ achievements are as good, if not better, than those of their schooled peers, particularly for structured approaches. A 2013 review of several US studies showed none had “reported higher standardised test scores for traditional education samples over homeschooled samples”.

The review also found the majority (78%) of higher education admission officers “expect homeschool graduates to perform, overall, as well or better in their first year of college than traditional high school graduates”.

Such findings are echoed in The Wiley Handbook of Home Education, published in 2017. It says, in spite of all methodological issues, that

what is known is that homeschooled students who go on to college and adulthood do quite well. 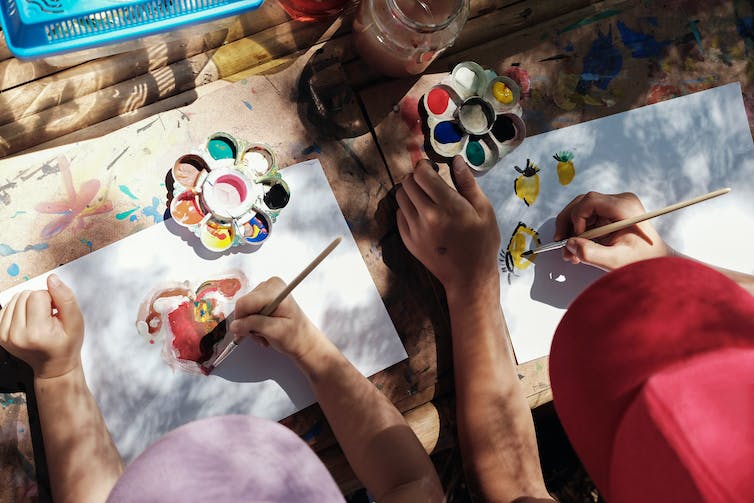 Homeschooled children have time to explore their own interests – which may be why they have good outcomes. from shutterstock.com

This evidence included a literature review of previous studies and analysis of results in statewide assessments such as the National Assessment Program Literacy and Numeracy (NAPLAN) tests, School Certificate and Higher School Certificate.

Within these data, the results indicated the homeschooled group scored significantly above the overall NSW average in nearly every test. The differences were largest in reading, grammar and punctuation, and numeracy, where home schooled students’ average scores were typically about 70 marks (or about one standard deviation) higher than the NSW average. The differences were smaller in spelling (about 40 marks) and writing (about 20 marks).

The study also reported on a much larger and involuntary sample of school students who had previously been homeschooled. These results also reflected well on homeschooling.

The study found in HSC 2 unit English (advanced and standard), there was no statistically significant differences between those who had previously been homeschooled and the state’s average results.

Despite such findings, the NSW report ignored potential benefits of homeschooling. It instead said there was

no strong evidence to indicate that home schooling is associated with substantially different academic outcomes.

Homeschooling research can be political, however. Academics writing in The Conversation after the NSW report was published accused the NSW government of purposefully omitting any evidence which suggests “school failure and home education success”.

A study conducted in Victoria in 2016 found homeschooled students scored higher in all NAPLAN areas than their traditionally schooled peers.

What about higher education?

The Home Education Network (HEN) – a homeschooling support group in Victoria – conducted what is considered the largest study of homeschooled alumni in Australia. The survey ran from December 2016 to March 2017 and included more than 500 former students – from two 15-year-olds starting apprenticeships to a 52-year-old associate professor. The average participant had received nine years of homeschooling.

One finding was that homeschooled students earned consistently more degrees (bachelors and above) than the general population.

There are several explanations for why homeschooled students do well.

Homeschooled children have the ability to learn in real-life contexts, which could be one reason for their advantageous outcomes. Another is one-on-one mentoring and tutoring opportunities and regular interactions with more informed peers such as older siblings.

Student initiative and agency to pursue interests, freedom for reflective time and imagination, and learning within in warm personal relationships are also recognised benefits to homeschooling.

No doubt more research is needed. But if early indications suggest, home education works well. It should be recognised, foregrounded and celebrated as a valid and valued alternative form of education.

Read more: Homeschooled children are far more socially engaged than you might think

This article was written with the assistance of: