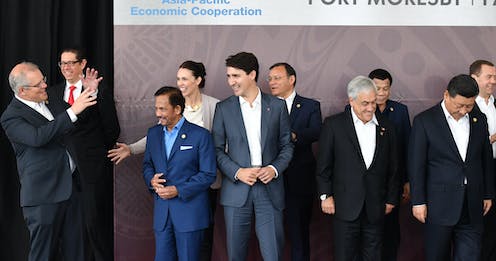 Australians don’t tend to vote on foreign policy in federal elections. This makes perfect sense: there is, for the most part, a tradition of bipartisanship on foreign policy and usually few key points of difference between the major parties.

The idea is that foreign policy should somehow be above politics and the politicking that typically characterises election campaigns.

Research on the Australian government’s policy agendas also suggests a limited and generally declining prominence of foreign policy in elections. In a 2010 study, for instance, researchers analysed governor-general and prime minister election speeches from 1945-2008 and found that foreign policy played an increasingly marginal role in both.

There are, of course, exceptions. In both the 1969 and 1972 elections, the increasingly unpopular Vietnam War became a major campaign issue, with Gough Whitlam campaigning to end conscription and bring Australian troops home. Whitlam’s message helped Labor sweep to power in 1972 for the first time in 23 years.

And in the 2001 and 2004 elections, foreign policy again featured in election debates. In 2001, John Howard’s incumbent Coalition government emphasised its willingness to take a tougher stance on asylum and terrorism than the opposition, helping return it to power.

And in 2004, Labor promised the withdrawal of Australian troops from the war in Iraq, while Howard (who was re-elected) argued this would only help fuel terrorism in the region.

Yet even in these “foreign policy” elections – when asylum seekers, terrorism and Iraq loomed large over the campaigns – health and education were still identified as most important issues for voters.

Without anything resembling a similar international crisis now, can we realistically expect a significant role for foreign policy in the 2019 election?

Of the many pressing challenges facing the country, managing the relationship with China will be profoundly difficult. For starters, our most important trading partner has demonstrated a willingness to destabilise regional security through its actions in the South China Sea. It has also moved into Australia’s traditional sphere of influence in the South Pacific and attempted to influence Australian politics through donations, lobbying and even cyber-incursions.

Beijing has also demonstrated a willingness to retaliate against Australia when Canberra has challenged it. The passage of Australia’s new foreign interference law, for instance, triggered warnings to Chinese students studying in Australia and new restrictions on Australian coal exports to China.

Australia’s relationship with China has been made more difficult by the loss of certainty around the US alliance under President Donald Trump. For Australia, it’s hard to tell whether the bigger challenge is a continued trend away from US global leadership or a potential shift to a more activist US foreign policy as Trump attempts to establish a legacy.

Australia also faces uncertainties in its relations with Indonesia and India following elections in both countries, the feasibility of its so-called “Pacific Pivot” and the ongoing spectre of terrorism. Yet, despite the importance of all of these foreign policy issues, all signs still point to an election focused overwhelmingly on domestic issues.

On most of these issues, including Australia’s approach to China and the US alliance, we have not seen significant points of difference between the parties thus far. Yet, whoever is chosen to manage Australia’s foreign relations matters. The parties need to spend more time discussing foreign affairs so voters understand what their strategies will be, particularly when it comes to our most important economic partner and our most important security partner.

To the extent that international issues have featured prominently in prior elections, they have often been viewed through the lens of domestic politics.

On asylum, Labor has emphasised its consistency with existing Coalition government policies – both remain opposed to transferring asylum seekers from offshore processing centres to Australia.

Climate change, however, has already emerged as one of the key issues of this year’s campaign, with both parties taking aim at one another’s promises on everything from renewable energy targets to electric vehicles.

Of course, all dimensions of climate policy have implications beyond Australia. Yet on climate diplomacy specifically, it’s Australia’s engagement with the UN Framework Convention on Climate Change (UNFCCC) and its climate reduction targets that are most prominent. Here, the opposition has committed to a more significant target of emissions reductions under the Paris Agreement – 45% by 2030 – than the Coalition’s 26-28%. The Coalition also plans to use carryover credits from the generous Kyoto Protocol allowance for Australia, a position ruled out by the opposition.

For the Coalition, however, the focus is again related to domestic concerns: how much Labor’s ambitious plans will cost Australians. Given the broader climate debate so far and the perceived success of past climate scare campaigns – especially against the carbon tax in 2013 – a full-frontal Coalition attack on Labor’s climate policies is not just possible, it’s arguably likely.

As the election looms, then, there may be a small role for foreign policy and Australian action on transnational issues after all. Chances are, though, it won’t be the wide-ranging foreign policy debate we should be having.