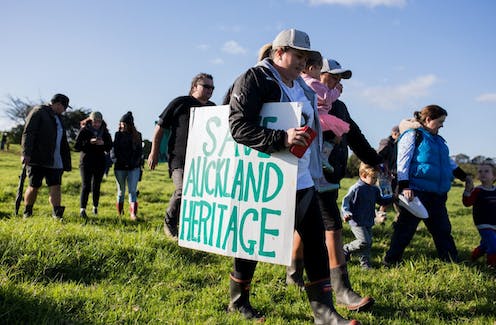 The case of Ihumaatao shows how culturally and historically important landscapes continue to fall through the cracks of the heritage system.

New Zealand was the last major landmass to be settled some 800 years ago. Ihumaatao is internationally and nationally significant as one of the earliest settlements.

On the Ihumaatao peninsula, 32 hectares of highly contested, privately-owned land is known to mana whenua (local Māori) as “Puketaapapa”. Others call it the “Wallace Block” after the Scottish settler family who were granted the land following Crown confiscation in 1863.

Now known as “Special Housing Area 62” (SHA62), this land is politically contested because the current legal owner, Fletcher Building Limited, plans to build 480 dwellings there. For mana whenua, this land is not only wāhi tapu (a sacred place) but also part of the adjoining Ōtuataua Stonefields Historic Reserve. It contains evidence of continuous Māori and Pākehā (colonial settlers) settler occupation.

Heritage New Zealand is the crown entity responsible for managing the national list and protection of historic heritage sites. But within the current planning and policy regime, it is not possible to demonstrate that Ihumaatao meets the threshold of national importance.

The absence of a national strategy or framework, combined with the fact that the strongest planning and protection policies lie with local or regional authorities, has created perverse outcomes. Nationally significant cultural heritage places can be more at risk than locally significant ones.

A comparative understanding of heritage sites on the basis of their national, regional or local significance cannot be established by looking at New Zealand’s heritage lists and schedules. Determining the commensurate level of protection for these places is difficult and at times flawed.

A bias operates in favour of Pākehā heritage. Currently, built colonial heritage represents over 80% of the country’s national heritage list. The vast majority of what the nation identifies and values as New Zealand heritage derives from the last 200 years of occupation. More than 700 years of Indigenous settlement is represented by less that 10% of places and the remaining 10% is either mixed, or the information is unclear.

The ability of Heritage New Zealand to prevent the destruction of Māori heritage, which is largely archaeological, was significantly weakened by the passing of the Heritage New Zealand Pouhere Taonga Act in 2014. This legislation replaced the Historic Places Act 1993, strengthening private property rights and emphasising advocacy and mitigation over protection. The result was a developer friendly regime.

From 2014 to March 2017, Heritage New Zealand granted over 97% (877 of 907) of applications for the modification or destruction of archaeological sites (information sourced through an Official Information Act request).

In the case of Ihumaatao, despite detailed heritage arguments for its protection, Heritage New Zealand granted an authority to modify or destroy archaeological heritage on the special housing block in 2018.

Another bias exists. A disproportionate level of resourcing is available for colonial built heritage over cultural heritage landscapes, wāhi tapu and archaeology. Most of the funding for the protection and enhancement of heritage is focused on buildings. The Heritage Equip Fund, only available for earthquake strengthening of heritage buildings, was recently increased to NZ$12 million. Additional funds from government include examples such as Auckland’s St James Theatre (NZ$1.5 million from central government and a NZ$15 million suspensory loan from Auckland Council), Dunedin Court House (NZ$20 million central government) and Christchurch Cathedral (NZ$10 million grant and NZ$15 million suspensory loan from central government, as well as NZ$10 million Christchurch City Council).

Compare this with the National Heritage Preservation Incentive Fund of around NZ$500,000 annually. This fund can be used for wāhi tapu sites and heritage buildings, but in the 2018 year it distributed 97.7% of its allocation to built heritage and only 2.3% to wāhi tapu sites (Opihi rock art site in South Canterbury).

To address the imbalance in heritage listing and conservation, New Zealand needs a national strategic framework. This framework would offer a “big picture view” that implements obligations under the Treaty of Waitangi and equitably speaks to the country’s past.

Ihumaatao is a symptom of a broken system. If the issues are not addressed, it will continue to allow the destruction of New Zealand’s unique heritage, especially our rare cultural heritage landscapes.